Everything in moderation, so the sentiment goes. Alcohol, for example, may bestow health benefits in small doses—a glass of wine does not make an alcoholic. The same idea is often touted with cigarettes. While there are no health benefits, a cigarette here and there can’t be all that bad, can it?

Not so fast, says a research team led by Allan Hackshaw, professor of epidemiology and medical statistics at University College London. Conducing a meta-analysis of 141 cohort studies, the team found that even one cigarette a day equated to a 48 percent increased risk of coronary heart disease. For women, that number jumped to 57 percent.

As the team noted in the study, published in the journal, BMJ:

“Smoking only about one cigarette per day carries a risk of developing coronary heart disease and stroke much greater than expected: around half that for people who smoke 20 per day.”

They also note that this research does not imply people shouldn’t cut down if quitting isn’t in the cards at the moment. But this eye-raising research is certain to make smokers question their efforts if even one daily smoke has such profound negative effects. It also brings into question today’s most popular alternative: e-cigs.

There, smokers can take some solace, at least according to a new congressionally mandated meta-analysis of over 800 peer-reviewed studies. Conducted by the National Academies of Sciences, Engineering, and Medicine (NASEM), the study set out to learn if e-cigarettes could help smokers quit traditional cigs and what health impact that would have.

As Vox notes, England is leading the charge in promoting e-cigs as a safer alternative to cigarettes, something American agencies have been reluctant to do. The FDA’s tobacco czar, Mitch Zeller, has said that he believes e-cigs should not be marketed to children and teenagers—and indeed, that is a major problem cited by NASEM in its study. 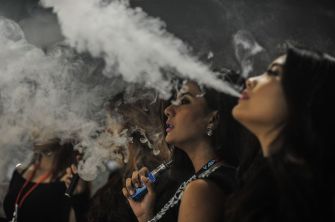 Promoters smoking electronic cigarettes during the Vape Fair in Kuala Lumpur. Vaping is soaring in popularity in Malaysia, the largest e-cigarette market in the Asia-Pacific region. Photo: Mohd Rasfan/AFP/Getty Images)

One key finding is that vaping increases the likelihood teens and children will smoke real cigarettes in the future. This news arrives even as the study states e-cigs are both less harmful than conventional tobacco products and that they may help adults quit smoking cigarettes.

Oncologist Maiciej Goniewicz, who was on the NASEM committee, says, “Children using e-cigarettes are at an increased risk of using tobacco cigarettes in the future.” Her statement comes after covering ten clinical studies on the topic.

While the study says e-cigs are healthier than cigarettes, this does not give vaping a clean bill of health. The authors of the report give a thumbs up to e-cigs in the short term, yet as they conclude:

“In the long term (for instance, 50 years out), the public health benefit is substantially less and is even negative under some scenarios. If the products do not increase combustible tobacco cessation in adults, then with the range of assumptions the committee used, the model projects that there would be net public health harm in the short and long term.”

One thing is certain: vaping keeps the toxic stench of cigarettes out of the public, which is a bonus. Yet the aromatic flavors are also in part what hook young people on vaping in the first place, which could lead to more toxic stench (and cancers, and so on). This catch-22 makes regulating e-cigs challenging. A short-term public health gain is not so appealing if the long-term effects are negative.

Then again, given all we know about the dangers of tobacco products in the first place, that anyone smokes today is evidence that we’re not really good about thinking in decades. That’s the insidious nature of addiction: immediate pleasure trumps the long arc of a healthy life every time.

Related
Life
Scientists use CRISPR to insert an alligator gene into a catfish
Disease kills off 40% of farmed catfish. This gene protects them.
Neuropsych
How you breathe affects your brain
Your breathing rhythm influences a wide range of behaviors, cognition, and emotion.
Health
What happens when regular porn watchers abstain for a week?
Researchers watched for signs of withdrawal — but didn’t find any.
Neuropsych
Daily caffeine intake temporarily alters your brain structure
Compared to people who took a placebo, the brains of those who took caffeine pills had a temporarily smaller gray matter volume.
Thinking
Why you should laugh at yourself, according to Seneca and Nietzsche
“It is more human to laugh at life than to lament it.”
Up Next
Politics & Current Affairs
New conspiracy theories embroil the New England Patriots
The New England Patriots are a magnet for conspiracy theories, spawning a new one right before the Super Bowl LII.