Last fall, one of my closest friends was visiting from the east coast. As per our usual weekend activities, marijuana was an integral feature. We’ve been smoking together since meeting in college over two decades ago. Cannabis and basketball were how we initially bonded, the former remaining relevant these many years later even as my aging knees can no longer tolerate the latter.

We have to make sure to get it in this weekend, he told me, as when he returns to Brooklyn he’ll begin attempting to have a child with his wife. And, he continues, cannabis deters that. Hold on a moment, I replied. I’m not so sure about that one.

Not that I’d ever stop someone from taking a break (or even quitting) marijuana or any other substance. Well, opioids, most likely. Cigarettes, definitely. But marijuana influencing sperm production seems like an odd throwback to the Reefer Madness days. I wish him well as he leaves for LAX to return to New York a sober man.

So when he receives a text from me early this year informing him of a new study showing no link between marijuana and fecundability, his reply is audibly relieved—some texts just transmit sound.

Published in January in the Journal of Epidemiology and Community Health (JECH), the researchers looked at data from 4,194 women living in either America or Canada during the years 2013-2017. These women were in active relationships and were not using contraception or birth control. In addition, 1,125 of their male partners enrolled in the study.

Of the volunteers, 12 percent of females and 14 percent of males used marijuana within two months of their initial study survey. There were then up to a dozen follow-up cycles. During that period, the percentages of marijuana users and non-marijuana users remained stable.

Given that 15 percent of couples experience infertility problems, the researchers wanted to know if marijuana would reduce the likelihood of pregnancy. As lead author Lauren Wise, a professor of epidemiology at Boston University, where the study was conducted, notes,

Given the increasing number of states legalizing recreational marijuana across the nation, we thought it was an opportune time to investigate the association between marijuana use and fertility. 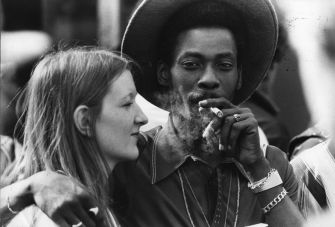 And so the team observed the above group of women, aged 21-45. They had to complete online questionnaires on demographics, behavioral factors, medical and reproductive histories, and medication usage, as did the male partners that participated in this study. Then every eight weeks over the next year follow-up questionnaires were required. If a couple did not conceive after 12 follow-up cycles they were no longer censored from the study.

It turns out my hunch was correct. As the study concludes,

In this preconception cohort study, there was little overall association between female or male marijuana use and fecundability.

Interestingly, men who smoked more than once a week showed a 24 percent increase in fecundability over non-users, while those who smoked only occasionally displayed a slight decrease. While the authors admit to factors that could be better assessed—Internet-based recruitment is often criticized; these couples were intentionally not trying to prevent pregnancies—they are confident that this is the first study on cannabis usage and fecundability, which could open up new avenues of research.

A few weeks ago I received an excited text from my friend: his wife is pregnant. After my text, he decided to resume his normal habits. Dispelling the long-standing myth of cannabis deterring fertility, it didn’t take long for them to conceive. With marijuana laws loosening around the world, hopefully more research on these issues will be conducted. Humans are not always great at letting go of myths, but the more evidence we find, the less likely people will perpetuate them.

People living in non-industrialized societies don’t get pimples.
Up Next
Politics & Current Affairs

After revealing new policies, Starbucks closed more than 8,000 of its stores Tuesday afternoon so some 175,000 employees could undergo racial bias training.