NASA’s Hubble telescope kinda sorta caught water vapor plumes on Europa, but they were just beyond the limits of its capability to positively identify them.

Now, the NASA Galileo Jupiter probe, which snapped massive amounts of photos from 1995 to 2003, has also detected a water vapor plume on the moon orbiting Jupiter.

It’s exciting for astrobiologists because they can possibly sample the buried ocean of liquid water that’s on Europa without actually touching down, which makes that concept much, much easier—and NASA is planning a mission to do exactly that.

Europa is slightly smaller than our own moon, but it holds an estimated twice the amount of water that planet Earth does—and that water is trapped within an icy shell that may be all but impenetrable if it had to be studied that way. This gives scientists a much more feasible shot at gathering a sample.

That very same water is in contact with Europa’s rocky core, which makes the moon (as well as Saturn’s moon Enceladus) the most likely to have alien life of some form, due to the interactions between the ocean and the hot mantle.

In the case of Enceladus, there are 100 geysers that blast ice and organic molecules so far into space, they form Saturn’s ‘E’ ring.

Actual, photographable water vapor or geysers have been elusive so far on Europa, however. This is the first time that a water vapor plume has been identified, but it took poring over images from as far back as 1997, shot by Galileo, and hinted at but never confirmed by Hubble. 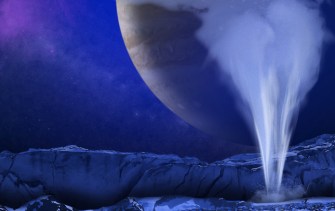 According to lead researcherXianzhe Jia, an associate professor in the Department of Climate and Space Sciences and Engineering at the University of Michigan, what accompanied Galileo’s observation of an apparent plume was a change in the moon’s magnetic field, as well as a big increase in the density of plasma, also known as ionized gas. That provides “compelling independent evidence that there seems to be a plume on Europa,” according to Jia.

The plumes that scientists thought they spotted with Hubble, in 2014 and 2016, also emanate from the same hotspot that the 1997 one did, further bolstering the evidence.

So basically, multiple sets of data and images from multiple separate encounters with Europa have more or less confirmed the presence of water vapor plumes.

Next up… Europa Clipper!

NASA plans to launch a craft that will orbit Jupiter in the next decade, and possibly in the next five years. It will make 45 flybys of Europa and take samples of the plume(s) so that the moon’s ocean can be studied further.

The only hitch? These plumes appear to be intermittent, so it’s possible that Clipper will be able to get itself into place, but the geysers might not be active when it does.

Still, 45 flybys should make the odds quite high.

Related
The Present
Radical idea: Redraw the U.S. map as a nation of city-states
While cities drive national economic growth, their political geography means they cannot effectively deal with inequality, poverty, and other socioeconomic problems.
The Learning Curve
Why do high IQ people stagnate in their careers? Emotional intelligence
Research suggests that emotional intelligence is more vital for success than IQ.
The Present
Even in the age of AI, some problems are just too difficult for computers
Computers are growing more powerful and more capable, but everything has limits
The Future
How the metaverse will revolutionize K-12 and higher education
Imagine going on a tour through the human circulatory system as a tiny cell. That is just one example of education in the metaverse.
Starts With A Bang
Ask Ethan: What are white holes, and do they really exist?
In General Relativity, white holes are just as mathematically plausible as black holes. Black holes are real; what about white holes?
Up Next
Surprising Science
Big “scary” asteroid flying between Earth and Moon tonight, 5/15/18
An asteroid about the size of a New York City block is flying between the Earth and the Moon today. How close, though?