The cultural impact of the sixties has left a lasting legacy. In a recent NY Timesbook review of “Hippie Food,” Michael Pollan writes that beyond environmentalism, feminism, and civil and gay rights, how we eat—not just what we eat—drastically changed. The consequences of this movement influence the ways in which we navigate grocery aisles today.

“Hippie foods may have been absorbed into the mainstream, and to an extent hippie farming too, but the big hippie idea about food — that our eating has moral, ethical and political implications — has lost none of its power, and continues to feed a movement.”

Since that era, environmental research has revealed much about the impact of our nutrition decisions. According to Ben Houl, director of the John Muir Institute of UC Davis, one-quarter of climate change is attributed to food choices, which create twice as much global pollution as cars.

The University of California recently published a quiz to help consumers better understand how their diet affects climate change. The ten-question multiple-choice test informs readers about the carbon footprint their dinner plates leaves behind.

For example, says Dr. M. Sanjayan, a UCLA visiting researcher and CEO of Conservation International, a steak—a food he loves—contributes 330 grams of carbon to the environment, when you factor in growing the animal, transportation, and, mostly, methane. Methane produced by livestock is 25 more times potent than carbon dioxide.

A six-ounce steak is equivalent to driving a car for three miles. By contrast, an equal serving of chicken produces 51 grams of carbon, while fish produces 40 grams. If you go full veggie you’re at 14 grams; an equivalent bowl of lentils comes in at two grams per serving. 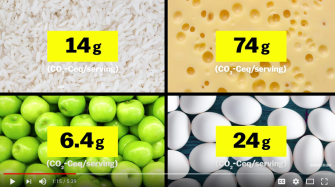 Lamb and beef have the most negative impact on the environment. While ethical vegans often claim their diet to be the best, researchers in the video above note that a better solution is the Mediterranean diet, which on average has been shown to help people live six to ten years longer than standard diets. While veganism does leave the lightest carbon footprint, it is not necessarily the healthiest choice for humans.

How livestock is raised also proves to be a critical factor. Sustainable farming is important, but as Sanjayan notes, even just reducing the amount of meat you eat matters. Maya Almaraz, a postdoctoral researcher at UC Davis, says that reducing your meat intake by 90 percent is more important than embracing a fully vegan diet.

She also notes that livestock accounts for 14 percent of greenhouse gas emissions. You also have to factor in grain being produced to feed livestock. The one billion tons produced each year could feed 3.5 billion people, minus the carbon. 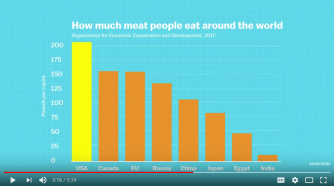 The researchers speculate that switching to a plant-heavy diet with poultry and fish and “tons of olive oil” could cut down global warming by 15 percent by 2050—the equivalent to removing a billion cars from roads.

Then there’s the most potent gas around. Seventy percent of nitrous oxide is produced from agricultural soil management. While nitrogen fertilizers were instrumental in boosting food supply, it is also a major contributor to global warming, costing the United States roughly $250 billion every year in health and ecosystem damages.

Michael Pollan is famous for his big-picture gaze on how we produce and eat food. His famous maxim, “Eat food, not too much, mostly plants,” is an essential mantra regarding our impact on our bodies and the planet. There is no surprise that personal and environmental health are linked. As Alan Watts used to say, we weren’t born into this world, we grew up out of it.

The “standard American diet” has produced an inordinate amount of suffering. We witness it in health care costs and rising sea levels. The places we don’t see it, on industrial farms and inside of our organs, are equally relevant. Knowing there are steps to help cure these ailments is important, but change only happens when taking those steps.

For Pollan these steps begin with cooking, a directive he offers in his book, Cooked. “Eating and drinking especially implicate us in the natural world in ways that the industrial economy, with its long and illegible supply chains, would have us forget.”

Those supply chains are predominantly responsible for creating the carbon footprint our food system produces. The sixties might have taught us that eating is a political act, but today, when everything seems political, a much larger truth about our precarious situation on this planet is uncovered: our obsession with meat is killing us. We don’t need to stop, but we also can’t simply default to convenience, as that will truly be our end.

Related
Life
Our antidepressant drugs are affecting animals and ecosystems
A toxicologist explains the impacts of antidepressants on fish — and no, they’re not getting any happier.
The Past
Ancient migration: Bering Strait land bridge from Asia to North America was not a one-way road
Ancient humans crossed the Bering Strait land bridge from Asia into North America. But some of them went back.
Sponsored
Want to boost your happiness? Buy experiences, not material possessions
Some experiences continue to pay dividends time and time again.
High Culture
Did Paul Cézanne hide an early self-portrait underneath a 160-year-old still life?
To answer that question, we may have to figure out when the famed painter started to go bald.
Strange Maps
Dutch government releases a genuine treasure map from WWII, sparking a hunt for the loot
X marks the spot. The Dutch town of Ommeren has been swamped by detectorists armed with shovels looking for $20-million treasure.
Up Next
Personal Growth
Children prefer reality-based playtime to fantasy
Worldwide studies are suggesting that children would much rather pretend to be grown-ups than pretend to be fantasy figures like Elsa or Spider-Man.