Paper was invented around 105 CE in China and brought to Japan in the 6th century as a precious, expensive, hand-made material cut and folded by monks during religious ceremonies. By the 1600s, paper could be affordably mass-produced, and the incredibly delicate and complex art of paper folding—that’s what “origami” means in Japanese—blossomed across Japan. Origami remains a fascination for many today, with instruction books, public demonstrations of the art, and many, many hands working carefully all over the world in the construction of fascinatingly intricate objects. Origami has also proven attractive to scientists, inspiring such diverse devices as solar panels and retinal implants. A team of three Polish designers—Piotr Panczyk, Damian Granosik, and Jakub Kulisa—has recently won a competition for its brilliant design of an origami skyscraper that can be lowered from the sky into disaster areas and then inflated to its full height. It’s ingenious.

The building is called “Skyshelter.zip” and it’s envisioned as a structure that can provide shelter for refugees from natural disasters such as hurricanes, tornadoes, and earthquakes. Skyshelter.zip is a tower that can be as tall as 328 feet high, so it could provide room for up to 1,000 people on multiple floors. It could also serve as a first-aid dispensary, or even be configured as a vertical farm to produce badly needed food in a disaster area. 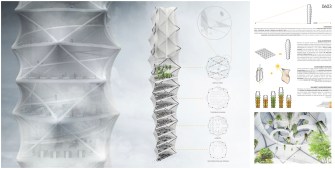 The concept has two aspects that make it especially promising for such situations. First, its footprint is about 1/30th of the space usually needed for emergency tents or containers so only a small space on the ground needs to be cleared of debris to accommodate it. This would be especially useful in tightly packed urban disaster zones.

Second, Skyshelter.zip is a totally self-contained system that can be quickly deployed, even on unstable ground. “When it needs to be delivered to remote areas,” Pańczyk tells NBC News MACH, “all it takes is moving a relatively small package that’s already assembled and ready to use… All that needs to be done is pumping a balloon.” That balloon is inside Skyshelter.zip.

Skyshelter.zip is folded, origami-style, into a compact package as wide as the eventual building’s footprint. Helicopters lower the package to the disaster zone where it’s moored and then inflated by an internal helium balloon that eventually serves as the skyscraper’s load-bearing device. Inside, lightweight, 3D-printed metal plates are pushed upward into place, and these pull into position support bands and the building’s walls, which are made of flexible ethylene tetrafluoroethylene (ETFE) plastic in which electricity-generating solar cells can be embedded. The number of floors in the final structure depends on the amount of helium pumped in, and can thus be adjusted to the needs of the current deployment. The skyscraper can be removed from the site by reversing the process and lifting it up and away.

Skyshelter.zip is, at this point, still an idea, since some of the technology it requires isn’t yet available. For example, as Pratt Institute’s Ostap Rudakevych reminds NBC News MACH, “Helium is one of the smallest atoms, and to date, there isn’t a flexible material that can adequately contain it. It will slowly leak out over weeks and would need to be replenished periodically, or the tower would sag and collapse.” While admitting as much, Pańczyk remains optimistic: “With current technology, building this structure would most likely prove to be impossible or extremely costly. But we are sure it is only a matter of time as most technologies we use already exist or are being developed.”

Related
L&D strategy
Best practices for a needs analysis [Templates included]
Conducting a thorough needs analysis requires care, curiosity, and open-mindedness.
Neuropsych
Memory and the benefits of forgetting
Forgetfulness isn’t always a “glitch” in our memories; it can be a tool to help us make sense of the present and plan for the future.
The Learning Curve
5 Stoic quotes to help you through difficult times
“We suffer more often in the imagination than in reality.”
Starts With A Bang
The good reasons scientists are so hostile to new ideas
Many people out there, including scientists, claim to have discovered a series of game-changing revolutions. Here’s why we don’t buy it.
The Present
Climate change is altering the chemistry of wine
Smoke taint from wildfires is gross, even to wine amateurs.
Up Next
Surprising Science
Think you have only 5 senses? You’ve actually got about 14 to 20.
Humans have way more than five senses, and if you include the animal kingdom there even more still.