The fight over genetically modified food involves some pretty weighty issues: global food security, the pros and cons of corporate mass-scale agriculture, how society deals with risk management when a small group of passionate advocates dishonestly trump up fears to promote their values. So it’s interesting to think that some time from now, when it’s likely that the fight has died down and agricultural biotechnology is in much wider use, that we may look back and realize that what helped turn the tide on this huge issue was … SpaghettiOs.

The Campbell Soup company, which sells SpaghettiOs (along with Goldfish, Pepperidge Farm cookies, V8 juice, and of course, Campbell soups), has called for mandatory federal labeling of foods that contain GM ingredients. Mandatory, as opposed to voluntary labeling, which is all the Grocery Manufacturers Association and most of its members publicly support. The GMA is developing what it calls a “Smart Label” — a code on food packages that shoppers can hold their smartphones up to and link to a website that reveals whether the food contains GM ingredients. Food companies can participate if they want to. Small wonder that a voluntary system, that doesn’t put the information right on the label, is unsatisfactory to GMO opponents, who hope that labels right on the product will frighten people away from buying such foods and kill off the entire technology.

Campbell’s break with the GMA is huge. Finally a major food company is saying what many GMO pundits (myself included) have been saying for some time; while there is no scientific basis or health reason to require labeling, (which Campbell’s makes clear in its explanation of its decision), it’s time to get this distracting fight out of the way, let consumers choose, and let society sort out the actual pros and cons of the various applications of agricultural biotechnology. And the right way to do labeling is under a federal requirement that provides one consistent system instead of a patchwork of different rules in different states, which would be a nightmare for national companies to comply with.

Campbell’s action is also breaking important new ground with its bet that labels won’t scare consumers away. As research has shown, most people don’t read labels, and many that do assume that if something is on the label, it must be okay. And as the psychology of risk perception predicts, when you give someone choice, it reduces any fear or worry they may have. Voluntary risks scare people less than risks which feel imposed, like eating something that contains an ingredient you don’t know about.

Bravo to Campbell’s, then, for bravely moving past the Fear of Fear (credit to Peter Sandman for the phrase) that most companies suffer from — the fear that anything that might prompt the slightest bit of concern in any consumer is to be avoided at all costs, for fear of losing even a penny of profit. That Fear of Fear has kept the retail food industry locked in a futile fight resisting mandatory GMO labeling, a fight that is not only costing the industry public trust and millions of dollars in political campaigning and lobbying, but also impeding wider adoption of agricultural biotechnology generally.

Campbell’s is saying enough is enough. Like a growing number of companies inside the food industry, Campbell’s has campaign fatigue on the issue. It’s tired of spending money on it. In fact, it plainly says it won’t anymore:

“We will continue to be a member of GMA and will participate in food industry initiatives that align with our Purpose and business goals. However, as a result of the change in our position on GMO labeling, Campbell is withdrawing from all efforts led by groups opposing mandatory GMO labeling legislation, including those led by GMA.”

And like a growing number of companies, Campbell’s wants certainty. It needs to know where things stand, and it needs to know soon, because the Vermont labeling law takes effect in July (the GMA is suing to overturn the Vermont law) and to get products on the shelves then food companies have to start making decisions now about everything from buying their raw materials to what their labels will say.

Which brings us back to SpaghettiOs (which provided way too much of my nutrition growing up). Campbell’s says that if federal rules aren’t adopted soon, it will just go ahead and label their products on their own. And SpaghettiOs is the example it uses to illustrate what its label would say. 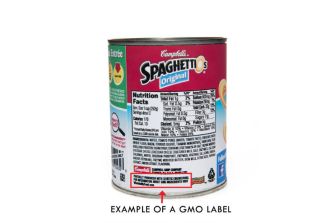 The print is pretty small but it says, “Partially produced with genetic engineering.” Because that doesn’t mean much to most folks, the label also says “For more information about G.M.O. ingredients, visit WhatsinMyFood.com.”

That is precisely what the anti-GMO people have been demanding, and the anti-GMO group (largely funded by the organics industry) Just Label It applauded Campbell’s announcement:

“Consumers simply want a factual disclosure on the package, not a warning, and we are hopeful that Congress can craft a national GMO labeling solution in the coming months. Thanks to Campbell’s leadership, we are closer to reaching that goal.”

That applause from GMO opponents reveals why Campbell’s action could be a turning point in the entire fight about the use of genetic engineering in agriculture. Either it pushes the government to adopt a labeling mandate — after Congress failed to act on one proposal last year, USDA Secretary Tom Vilsack called a meeting of all the players for later this month to try and resolve the issue and avoid “chaos in the market” — or it puts Campbell’s GMO labeled products on the shelves, where they will probably sell just fine. And if Campbell’s gives consumers what they want, and sales are steady and it doesn’t cost the company much money, other companies also suffering GMO campaign fatigue, eager for certainty, and eager to demonstrate they’re giving consumers what they want, will surely follow suit.

And that will take the wind out of the biggest sail of the anti-GMO movement. Most opponents have staked their success on the labeling fight, claiming that all they want is to give consumers choice. If consumers get that choice, and buy those products, it will be tough for those advocates to then try to get GMOs banned some other way, or try to boycott all of Campbell’s popular products, trying to take away from consumers what they are choosing to buy.

Dissension has been growing within the Grocery Manufacturers Association’s 200-plus members for months over the GMO labeling issue. The Campbell’s decision appears to be timed to bring that dissension to a head when the GMA holds a meeting on the issue this week. At stake is nothing less than the pace of development of agricultural biotechnology in the United States, which influences agriculture worldwide. An awful lot hangs in the balance as the GMA and Secretary Vilsack hold their meetings, and SpaghettiOs have become the symbolic fulcrum on which that balance currently rests.

Related
Life
Scientists use CRISPR to insert an alligator gene into a catfish
Disease kills off 40% of farmed catfish. This gene protects them.
Neuropsych
How you breathe affects your brain
Your breathing rhythm influences a wide range of behaviors, cognition, and emotion.
Health
What happens when regular porn watchers abstain for a week?
Researchers watched for signs of withdrawal — but didn’t find any.
Neuropsych
Daily caffeine intake temporarily alters your brain structure
Compared to people who took a placebo, the brains of those who took caffeine pills had a temporarily smaller gray matter volume.
Thinking
Why you should laugh at yourself, according to Seneca and Nietzsche
“It is more human to laugh at life than to lament it.”
Up Next
This Young Girl’s Life Was Saved By Google’s Low-Cost Virtual Reality Device
A four-month–old little girl is alive today because of an inexpensive virtual reality device made by Google.