A team led by Rachel R. Romeo of Harvard and MIT has just published research that finds conversing more with children results in stronger connections between two brain regions vital for language development. Obviously, younger kids may not yet have words at their disposal, but sounds count—the important thing is that parent and child take conversational turns. The more turns, the stronger the brain connections.

This is an exciting development for parents on a practical level, particularly those of lower socioeconomic status (SES). Prior to this research, the focus had been on the well-documented “30-million word gap”—a vocabulary deficit in their parents—as the factor that leaves many children of SES families with poorer language skills as adults. The new study finds instead that the amount of back-and-forth with a child is an independent and even more critical factor since it affects the physical strength of connections between two speech-critical areas of the brain.

The pathways studied are those that connect two regions important to speech: Broca’s area and Wernicke’s area.

Broca’s area has long been known to be involved in the production of speech, though its precise role wasn’t known until recently, as revealed in “Broca’s Area Is the Brains Scriptwriter Shaping Speech.” It’s located in the frontal cortex. According to Johns Hopkins, “Broca’s area is active early in the process of forming sentences and ends its work before a word is actually spoken, which is sooner than was previously believed.” (Until this research, it had been thought to control the physical act of speaking. Broca’s aphasia causes its sufferers to have difficulties producing sounds.)

Wernicke’s area is associated with the comprehension of speech. It’s usually considered to be in the brain’s left hemisphere, though there’s some controversy about that. Damage to the area causes Wernicke’s aphasia, where victims “string together incongruous syllables, neologisms, similar-sounding words substituted for one another, and so on, to produce speech that made little sense.”

About the pathway between them

Romeo’s research focuses on how conversational turns affect the strength of the connection between Broca’s and Wernicke’s, as measured by diffusion coherence in two dorsal tracts, the superior longitudinal fasciculus (SLF) and the arcuate fasciculus (AF). 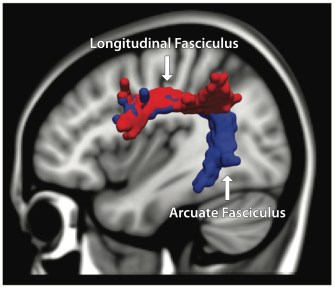 The participants in Romeo’s study were 40 pre-K or kindergarten children and their parents.

Each was to submit home recordings of two consecutive weekend days for analysis by software that “automatically processes the recordings and estimates the number of words spoken by an adult in the child’s vicinity (“adult words”), the number of utterances the key child made (“child utterances”), and the number of dyadic conversational turns, defined as a discrete pair of consecutive adult and child utterances in any order, with no more than 5 seconds of separation (“conversational turns”).” In addition, subjects were required to submit to MRI scans.

Not everyone did everything: six didn’t submit recordings, seven didn’t get scanned, and the scans for 10 subjects were unusable due to movement. Participants were also assessed for SES.

What researchers were looking at

The scientists used diffusion tensor imaging to measure the level of anisotropy of water molecules in the SLF and AF tracts—lower Fractional Anisotropy, or “FA,” values mean a tract is exhibiting isotropy, where the molecules spread indiscriminately in different directions. A higher FA value signifies greater anisotropy, a more tightly directed flow of water and thus greater structural integrity. Of particular interest, according to the study, was the “coherence of diffusion parallel to the tracts, which is often considered a marker of greater axonal myelination.” Myelin is a sheath material that protects and reinforces axons, making them stronger.

The number of adult-child conversational turns young children experienced, independent of SES, was positively correlated with greater white matter and stronger brain connectivity, i.e. the strength of coherence associated with the left arcuate fasciculus and the left superior longitudinal fasciculus.

The power of conversation

The takeaway here is that, for any parent, conversing with a child frequently—even if one of you is just babbling—is a great way to increase their speech capabilities. And that this can be done by mom or dad, regardless of SES, is great news. As the authors conclude:

“This suggests that early intervention programs should not only encourage parents to talk to their children, but to talk with their children to promote optimal brain development.”

On December 19 1972, astronauts Eugene Cernan, Harrison Schmitt and Ronald Evans splashed down safely in the Pacific Ocean, ending the Apollo 17 lunar mission. They were the last people to travel […]
The Future

Coupled with 3D printing, biomining the Moon or Mars with microbes could sustain human colonies without constant re-supply from Earth.
The Present

Every power source involves trade-offs. Given the challenges of increasing demand and climate change, what is the future of energy?
Neuropsych

Certain types of dogs seem to be more discerning than others, however.
Up Next
Culture & Religion

Over the past 70 years, the Roman Catholic Church in Pennsylvania has been covering up child sexual abuse by hundreds of priests, according to a new report issued by a grand jury on Tuesday.