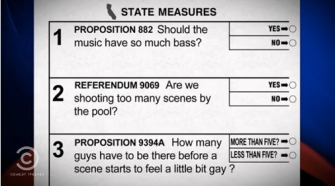 It’s easy to poke fun at Measure B, and there are serious reasons to wonder whether the general public is the right arbiter of public health regulations. It’s one thing for the electorate to weigh in on questions of political morality like same-sex marriage, immigration policy or affirmative action; these issues raise philosophical questions that the people writ large are, arguably, as qualified to resolve as an assembly of legislators. But when it comes to matters of public health, perhaps elected representatives of the people are in a better position to weigh expert testimony and decide whether a given proposal is really in the general interest.

I’m dubious about entrusting questions like these to average voters. But in this case, the people of Los Angeles seem to have made the right decision.

The potential benefits of Measure B have nothing to do with the aesthetic considerations implied by Jon Stewart’s mock ballot. The idea is simple: requiring condom use will bring down rates of sexually transmitted infections (most notably, HIV/Aids, chlamydia and gonorrhea) among adult film stars and lessen the risk of these diseases spreading to the general population. Here is the relevant data, as detailed in a 2011 article by Kenneth Katz and Jeffrey Klausner:

The risks of transmission and acquisition of sexually transmitted diseases (STDs), including HIV, in the adult film industry are, similarly, real and increasingly well documented. In a study in 2001–2002 among 853 performers, rates of chlamydia and gonorrhea were twice as high as rates among similarly aged persons visiting family planning clinics in California. Another study documented several cases of HIV transmission among performers resulting from an acutely infected index case. Most recently in October 2010, the Los Angeles Times reported that an adult film performer tested positive for HIV infection resulting in the temporary suspension of filming at 2 large companies.

Opponents of the initiative counter that the industry is effectively policing itself. In the New York Times last week, Donald G. McNeil Jr. reported on the testing regime that some public health experts are endorsing with reservations. The biweekly ritual of email-confirmed testing results is “bizarre,” McNeil wrote, but “seems to work.” Still, there is little doubt that more widespread condom use will provide a safer workplace for actors in the adult film industry, and there is no argument other than pornography film producers’ profit motives to weigh against that benefit.

“Occupational health standards routinely incorporated by other industries should penetrate the adult film industry,” Katz and Klausner conclude. Insisting on safer sex practices by adult film stars is analytically equivalent to insisting on harnesses to safeguard construction workers from fatal falls or canopies to protect workers in mines. The crowd may not be the most trustworthy source for public health legislation, but this time the right decision emerged.

Related
Starts With A Bang
Ask Ethan: What are white holes, and do they really exist?
In General Relativity, white holes are just as mathematically plausible as black holes. Black holes are real; what about white holes?
Life
Strange life forms create an “alien” ecosystem in an abandoned uranium mine
Slimy biofilms made up of bacterial and eukaryotic life forms have taken over an abandoned, flooded uranium mine in Germany.
Hard Science
Earth has an eerie “sodium glow,” and astronomers use it to image stars
Air currents in our atmosphere limit the resolving power of giant telescopes, but computers and artificial stars can sharpen the blur.
Health
How saliva changes the flavor of food
“It’s a liquid, but it’s not just a liquid.”
High Culture
Why are flood myths so common in stories from ancient cultures around the world?
Could the prevalence of flood myths around the world tell us something about early human migration or even the way our brains work?
Up Next
The Hole In Higher Education
There is a hole in higher education and it might not be where you expect. This hole in the system is causing substantial problems for our country, including for taxpayers […]