“This is a complex story, but one with important practical implications,” says James Hansen, a climate scientist at Columbia University’s Earth Institute. He warns the effects of global warming will cause storms to become more violent and sea levels to rise, and his research team predicts this may happen in the next 50 years.

“That would mean a loss of most of the world’s large cities and all their history,” Hansen says.

Scientists have been laying out expectations for a future world changed by the Earth’s climate. Rising CO2 levels will acidify the oceans, stunting the growth of coral reefs, causing sea life to die off. The warmer atmosphere will affect air travel, agriculture, and weather. The polar caps will melt, causing rising sea levels as much as 30 feet, and with it our coastal cities will be lost. But the paper, Ice Melt, Sea Level Rise and Superstorms illustrates how little time we may have left.

The paper is being published in Atmospheric Chemistry and Physics. Within it, Hansen and his team use climate models, present-day observations, and paleoclimate data that led them to make these startling conclusions.

The paper is around 41 pages long (not including references), however, Hansen and his team have made a 15 minute video discussing its main points.

Observational data already shows us the weather is getting weirder and coastal cities, like Miami, are flooding more often. Their research projects sea levels will rise several meters sometime this or early next century. It isn’t growing linearly, but exponentially.

The paper puts forth evidence that this process is being sped up by melting freshwater from the polar ice caps in Antarctica and Greenland. This freshwater spilling into the ocean at this rate is disrupting the convection process; preventing heat in the ocean from escaping into the atmosphere. This creates a feedback loop, causing warmer waters to melt the ice sheets that sit below the surface. 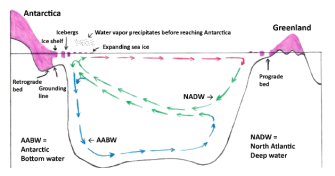 This meltwater’s effect extend beyond rising sea levels—it’s also changing the severity of our storm systems. “The warm water along the East Coast is the reason that ‘Sandy’ retained hurricane force winds all the way up to the New York City area – the nearby Atlantic was about 3°C warmer than normal,” says Hansen. “This unusually warm ocean water has also been able to provide the moisture for record snowstorms in recent years.”

Hansen says these are relatively small effects, compared to what might happen in the future if the oceanic circulation process were to shutdown entirely.

The paper bases much of its evidence off of paleoclimate data from 120,000 years ago, when the Earth’s temperature was a degree warmer than today. 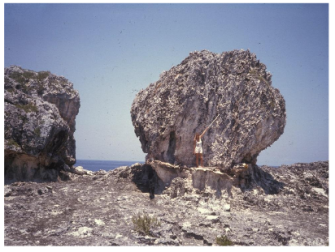 Evidence indicates that these boulders in the Bahamas were thrown far into the coastal ridge.

Hansen’s claims are certainly extreme, and he encourages us to ask questions and discuss this with scientists. More than anything he asks that we look at the larger picture.

“I think the conclusion is clear,” he says. “We are in a position of potentially causing irreparable harm to our children, grandchildren and future generations.”

This global map shows the surface of Ceres in enhanced color, encompassing infrared wavelengths beyond human visual range. Image credit: NASA/JPL-Caltech/UCLA/MPS/DLR/IDA.Those white spots are still salt, but there’s so much […]