If you’ve ever been shaken by a thunderclap, or sat in spectacle as a white forked tongue streaked across the sky, you’ve bore witness to one of the most powerful phenomena in the universe. Researchers in Japan recently found out just how powerful lighting is. Certain kinds produce gamma rays, leading to a nuclear reaction. According to the report published in the journal Nature, “Thunderclouds are natural particle accelerators.”

Gamma rays have the smallest wavelength on the electromagnetic spectrum. They also pack the most energy. They’re usually born within the hottest environments, such as in the hearts of pulsars, neutron stars, and supernovas. Knowing this, it’s mind-blowing that gamma waves can be created right here on Earth, by a relatively common phenomenon.

Nuclear reactions within lightning storms was first hypothesized nearly a century ago. In the 1980s and sporadically up until today, detection has been made via land-based observatories, aircraft, and satellites. And there was also a curious case in 2015, of a Japanese beach town where–after a series of high-energy thunderstorms, gamma rays were recorded penetrating the ground. Despite all this, scientists were unable, until now, to confirm exactly what particles were being made during these photonuclear reactions. 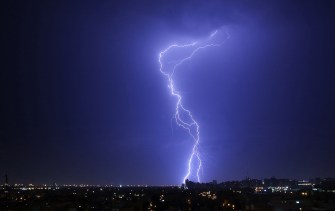 The latest study is the first time this phenomenon has been observed directly, and one of the first times radioactive isotopes were seen naturally occurring in the environment. The other place such isotopes are made is when cosmic rays bounce off the atmosphere. Within thunderheads, gamma rays knock free the neutrons of nitrogen atoms, setting off a nuclear reaction. Storms are likely on the Sea of Japan’s coast in winter. Scientists took advantage of this last February, by commandeering four reaction detectors at the nearby Kashiwazaki-Kariwa nuclear power station, located in the coastal city of Niigata.

Two lighting strikes were recorded producing radiation. Researchers gathered data and analyzed it. The strikes occurred about one-third of a mile away (0.5-1.7 km). The energy of these strikes was 0.511 megaelectronvolts (MeV). The photonuclear reaction lasted for up to a minute. What resulted was the kind of electron–positron annihilation indicative of a nuclear reaction. Neutrons and positrons were the final result.

Teruaki Enoto is an astrophysicist from Kyoto University and a researcher on this study. He told Science Alert, “The photonuclear reactions indicate that lightning also interacts even with nuclei if gamma rays have sufficiently high energy to knock out neutrons from the nuclei.” So lighting storms can cause radiation, is this a cause for concern? According to Enoto, “Since the radioactive isotopes are short-lived, spatially restricted, and [comprise a] relatively small amount compared to usual background radiative environments, I think there is no health risk from this phenomena.”

Scientists may have found a heretofore undiscovered avenue in which rare isotopes are created on our planet. They still don’t know if this happens during all lightning storms or only the most powerful ones. Future studies will likely unravel that mystery, along with what other (if any) isotopes or particles are born inside of a raging storm cloud.

To learn more about the science behind lightning, click here:

Related
Thinking
Finding your essential self: the ancient philosophy of Zhuangzi explained
Adopting a healthy scepticism towards inherited ideas means “emptying the container of the Self.”
The Future
Startup’s bladeless flying car is designed to reach Mach 0.8
One of Jetoptera’s VTOLs is expected to reach speeds of around 614 mph, about as fast as a commercial jet airliner.
Health
New blood types are often discovered following medical disasters
New blood types are regularly discovered by an unusual absence or an unusual presence — both of which can result in tragedy.
The neuroscience of loving music
Humans are musical animals four million years in the making, explained by music expert Michael Spitzer.
▸
8 min
—
with
Michael Spitzer
Life
Scientists use CRISPR to insert an alligator gene into a catfish
Disease kills off 40% of farmed catfish. This gene protects them.
Up Next
The Present
Can Giving Ayahuasca to Prisoners Reduce Recidivism?
The Brazilian government has been trying to answer this very question in its ever-growing prison population, which has doubled since the year 2000.