It’s been a long time since it was first proposed, but now scientists appear to have finally found evidence of a weird quantum object called an “odderon”. “We’ve been looking for this since the 1970s,” says Christophe Royon of the University of Kansas (UK). 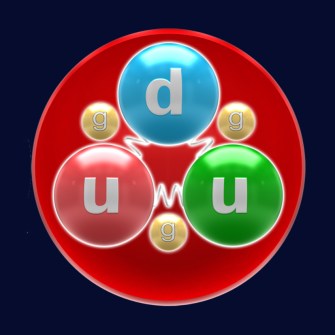 Gluons (g) holding together a proton’s up (u) and down (d) quarks. (general-fmv)

Hadrons are particles such as protons and neutrons that are constructed of quarks joined to each other by gluons. When protons are smashed together in a collider, they sometimes survive to cast out gluons locked in a positional relationship to each other called a “bound state.” The gluon partners are deemed “quasiparticles” because they behave like particles, acting together as one object. The possibility that there could be “odderons,” odd-numbered quasiparticles, was proposed in 1973. Now, a large team of physicists working with CERN’s Large Hadron Collider (LHC) has submitted research for peer review that asserts they may have at last witnessed evidence of odderons’ existence.

KU faculty Timothy Raben suggests a way to visualize the production of quasiparticles through the collision of protons. “The protons interact like two big semi-trucks that are transporting cars, the kind you see on the highway. If those trucks crashed together, after the crash you’d still have the trucks [the protons], but the cars [the gluons] would now be outside, no longer aboard the trucks — and also new cars [quasiparticles] are produced (energy is transformed into matter).” In such cases, the protons are considered “deviated,” in that they survive, but without some of their gluons.

Over 100 physicists from eight nations worked on the project using CERN’s TOTEM experiment. “TOTEM” is short for “TOTal cross section, Elastic scattering and diffraction dissociation Measurement at the LHC,” and its mission is the “precise measurement of the proton-proton interaction cross section, as well as to the in-depth study of the proton structure.” It’s housed in a 440-meter subsection of the LHC, located near a point in the system at which proton beams are smashed into each other. 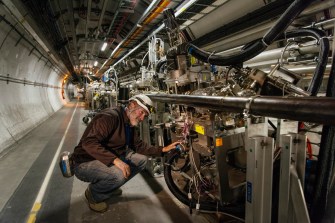 Physicists had only observed signs of even-numbered sets of bound gluons before this. Now, however, the researchers were able to take advantage of new high levels of energy first produced by the LCH in 2015. They were also able to make more precise observations, thanks to TOTEM’s fast-timing detectors that can measure the time-of-flight of protons.

Royon says, “Until now, most models were thinking there was a pair of gluons — always an even number. Now we measure for the first time the higher number of events and properties and at a new energy. We found measurements that are incompatible with this traditional model of assuming an even number of gluons. It’s a kind of discovery that we might have seen for the first time, this odd exchange of the number of gluons. There may be three, five, seven or more gluons.”

Beyond the odderons, TOTEM is seen as an exciting platform for further advances in medicine, the measurement of cosmic rays, and desalinization of seawater.

Related
Starts With A Bang
The quantum reason why neutral atoms first formed
If it weren’t for the intricate rules of quantum physics, we wouldn’t have formed neutral atoms “only” ~380,000 years after the Big Bang.
Hard Science
Some earthquakes last for seconds, others for minutes — and a few for decades
What do you call it when the Earth shakes for three decades?
Sponsored
What childhood “money story” is shaping your financial behaviors?
Here are the signs that you inherited “money anxiety” from your parents.
The Present
The “maritime Indiana Jones” who salvages shipwrecks now wants to tow icebergs
Simple physics makes hauling vast ice chunks thousands of miles fiendishly difficult — but not impossible.
Neuropsych
Inside the brains of aging dogs
In a citizen science project, thousands of pet dogs are helping scientists to understand what happens to memory and cognition in old age.
Up Next
The Present
The Flat Earth Society has revealed that SpaceX’s Falcon Heavy launch was a hoax
SpaceX made history Tuesday after successfully launching its Falcon Heavy rocket into space, but not all are convinced any of that actually happened.