I’m a native Californian so naturally I’m concerned about the massive drought currently taking a state that looks like this: 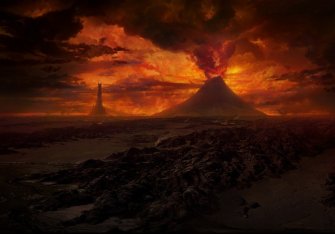 Okay, so there’s a minor exaggeration there. Regardless, we’ve written at length over the past year all about California’s recent record dryness. One thing we haven’t written much about is rain. Luckily for residents of the Golden State, they just got a ton of it.

“On Tuesday, downtown Los Angeles experienced the most rainfall in a single day since records have been kept – 1.21 inches of rain. Santa Barbara has seen more than two inches, while Monterey County has taken in six.”

The problem is that five days worth of rain, a large amount by almost any measure, is hardly going to make a dent in the drought. From Gloria Goodale of CSM:

“Even as drought-weary Californians are basking in a five-day downpour, they are largely savvy enough to know that this storm – no matter how mighty – is not enough to turn the tide for a region engulfed in a historic three-year dry spell.”

Some officials were hoping that this year’s El Niñosystem would quench California’s thirst but that faith has since been extinguished by the tepid warming of coastal waters. A weak El Niño is a tough pill to swallow for a state in which 80% of the land is experiencing what meteorologists consider extreme drought. It would take 150% of average annual rainfall over the coming winter (California’s wet season) to stave off the dryness. That’s not happening any time soon.

If and when nature decides to end this drought, Californians will have hopefully gotten much better at conserving resources. Water-saving efforts are mandated and in place throughout the state. It’s the first major step of restructuring life in a state now defined by extremely dry conditions.

Technology has advanced at a blinding pace in the past 150 years. That won’t always happen.
Great Question

How to help kids traumatized by violence?

People usually think about the military when they talk about trauma. But  for every soldier who gets PTSD in a war zone, there’s at least 30 children who get traumatized […]
▸
3 min
—
with
Bessel van der Kolk
Thinking

The most unpleasant aspect of intellectual liberalism is that when speech causes emotional or mental pain, the offended parties are morally entitled to nothing.
Thinking

Is nothing sacred? How Durkheim defines the things that matter

All religions have totems, rites, and taboos that are considered "sacred." Émile Durkheim believed society is largely underpinned by them.
The Past

The poisoned candy legend is just one way that American fears manifested: as an easily understood threat to innocence.
Up Next
Technology & Innovation

Effective Branding Is About Way More Than Clever Tweets

While a funny presence of Twitter may make you stand out from the rest of the e-static, eliciting chuckles alone is not going to build the brand loyalty your product needs to thrive.