Imagine you are in a terrible car accident. You wake up to the horror of a missing limb. The doctor says you are lucky to be alive, but you feel the opposite of lucky. You feel devastated. Today, a prosthetic is the best that can be offered. But in the near future, doctors may be able to 3D print your very own arm, a perfect genetic match, and reattach it without any fear of rejection or the need to take harsh drugs to prevent it. For all intents and purposes, this is your very own arm.

Now imagine if you need an organ transplant. Today, 8,000 Americans die each year waiting for a viable organ. That’s 22 people per day. Breakthroughs in stem cell research may eliminate this tragedy from the human landscape. These, and many other innovations are close at hand. Stem cell breakthroughs are occurring at such a rapid pace that a whole new term has sprung up, regenerative medicine. So what are stem cells? What are the potentialities? And where is it all headed?

Stem cells are progenitor cells which can become any cell in the body. Embryonic stem cells are the kind that cause a developing embryo to grow and differentiate in order to form a fully functioning organism. Only these cells can create an entirely new body. There was a controversy surrounding the use of embryonic stem cells until 2011, when researchers from Japan and Wisconsin found a way to produce them from ordinary skin cells. 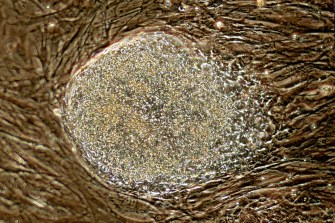 The next most versatile are called pluripotent cells. They can become any type of cell in the body. The kind each adult has are called multipotent stem cells. There are only so many tissues this kind can become. They reside within the bone marrow and come in two different varieties, hematopoietic stem cells which can become any aspect of the blood, and mesenchymal cells which can transform into cartilage, fat, and bone. Two medical applications are currently in use, healing tissues and for research purposes. Take Alzheimer’s for instance. There are some slight moral issues surrounding slicing open a living person’s head for research purposes. With stem cells, the appropriate tissues can be grown in a lab and studied, to help better understand the disease and develop novel treatments.

One kind of therapy already in use today is known as expanding stem cells. Here, a patient has their very own stem cells extracted. These are cultivated until they reach sufficient numbers, and are then injected back into the injured area. There are already five or six drugs on the market using non-pluripotent cells. For example, there’s Provenge to treat prostate cancer, Appligraf which helps diabetic foot ulcers heal, and Carticel which replaces knee cartilage. These are small advancements that have popped up in the last five or six years. But since they have been proven to work, researchers are emboldened to move on to bigger and more complex territory.

Mesenchymal stem cells are slated to be the next area of focus. These may be used to repair eye and nerve tissue. One’s own mesenchymal cells can be used to heal the heart and blood vessels, and treat Crohn’s disease. Ongoing studies are looking into whether or not stem cells can help regrow lost muscle in returned veterans, repair eye tissue in the wake of macular degeneration, and even cure congestive heart failure. 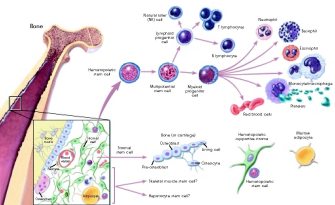 The next frontier is combining structures and stem cells to create whole organs and tissues. The problem is that stem cells need something to stick to in order to create the shape of the organ or limb. Researchers at University College London have created a technique using a special polymer as a frame to build upon. The team was able to take a sample of a patient’s own stem cells and fat to grow a variety of artificial body parts including noses, ears, tear ducts, windpipes, and blood vessels.

Another team from Wake Forest University have created a bioprinter able to recreate ears, muscle, and bone through a combination of living cells and an artificial material much like plastic. They have successfully attached such structures to rodents. Human trials are in the works. Two Israeli firms Nano Dimension along with biotech firm Accellta Ltd, recently announced the ability to produce high quality cells, large organs, and even tissues using 3D printing. Not only can they print high resolution cells but produce them in high volume. In a press release, the company’s spokespeople said the technology had applications in cosmetic safety testing, drug discovery and testing, tissue printing and even “organs on chips.” 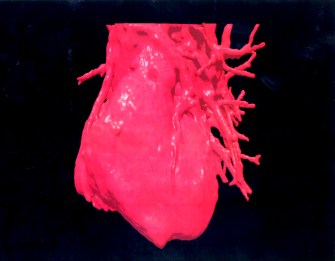 Model of a bioprinted heart.

Regenerative medicine has become so worthwhile that some people are having the umbilical cord blood from a new birth stored at a blood bank so as to be able to harvest those stem cells later on. New harvesting techniques are on the horizon too. Recently, researchers at Medical University of South Carolina have found a way to harvest stem cells from baby teeth. Now, tooth storage facilities are likely to pop up around the country.

In the near future, regenerative medicine promises to help heal 80 individual diseases. It may also lend to instant diagnosis and treatment for many illnesses. Though it seems fantastic, bioprinting combined with stem cell technology will dramatically advance healthcare into an entirely new strata. Though it is hard to predict the future, especially when it comes to technological development, most experts agree that dramatic changes are set to come online within the next five years or so.

To learn what body parts we can already replace today click here:

82% of professionals say they’d take a lower-paying job to work for an organization with more ethical business practices. This is just one of the reasons to offer ethics training for employees.
Up Next
Culture & Religion

A recent Supreme Court ruling declared that unintentional bias is not only real but harmful. That ruling not only validates the work of cognitive scientists, but paves the way for change.