If you ever needed more proof how important good parenting is for the future of humanity, MIT researchers showed in a new study that even small babies can learn that hard work pays off. How would they learn? By watching the adults around them persevere and succeed in difficult tasks.

The study concluded that babies of no more than 15 months can learn the value of trying hard after observing examples of adults struggling to complete tasks. This realization should take some pressure off the parents, saidLaura Schulz, a professor of cognitive science at MIT and senior author of the study.

“There’s some pressure on parents to make everything look easy and not get frustrated in front of their children,” said Schulz. “There’s nothing you can learn from a laboratory study that directly applies to parenting, but this does at least suggest that it may not be a bad thing to show your children that you are working hard to achieve your goals.”

Schulz and Julia Leonard, the paper’s first author, wanted to see how children decide, even at an early age, when to try hard and when not to bother. They run their experiments on two different occasions, with the reproduced study achieving the same results.

The experiments involved 103 and 120 babies, respectively, between 13 and 18 months of age watching an adult performing two tasks – removing a toy frog from a container and a key chain from a carabiner. Half of the babies were shown an adult succeed in the tasks three times in 30 seconds, while the other half observed the adult struggling for 30 seconds until finally achieving her goals.

The researchers then showed each baby a musical toy that had an “on” button that did not actually control the toy. The scientists turned the toys on and off using a hidden button to show the babies that they can be activated. After that they turned the toys off and gave to the babies to see what they would do.

In two minutes of play with the toy, researchers found that the babies who earlier saw an adult struggle pressed the fake “on” button twice as many times than those who saw the adult be successful right away. They also pressed it twice as many times before asking for help or just giving up.

“There wasn’t any difference in how long they played with the toy or in how many times they tossed it to their parent,” explained Leonard. “The real difference was in the number of times they pressed the button before they asked for help and in total.” 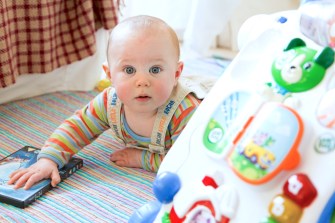 Kiley Hamlin, an associate professor of psychology at the University of British Columbia, who was not involved in the study, said it was a “lovely demonstration” that persistence can be taught even to infants. She saw two ways in which we should regard the findings of the study, stressing that it doesn’t take much to be a compelling role model.:

“First, infants seem to be learning something about persistence in general, rather than on how to best solve task A or task B specifically,” said Hamlin. “Second, influencing our infants’ persistence, at least in the short term, might (ironically) take relatively little effort on our part.”

The scientists are looking next to understand how long influencing an infant’s behavior would last with different kinds of tasks.

You can read the study here, in Science.

Related
Starts With A Bang
The quantum reason why neutral atoms first formed
If it weren’t for the intricate rules of quantum physics, we wouldn’t have formed neutral atoms “only” ~380,000 years after the Big Bang.
Hard Science
Some earthquakes last for seconds, others for minutes — and a few for decades
What do you call it when the Earth shakes for three decades?
Sponsored
What childhood “money story” is shaping your financial behaviors?
Here are the signs that you inherited “money anxiety” from your parents.
The Present
The “maritime Indiana Jones” who salvages shipwrecks now wants to tow icebergs
Simple physics makes hauling vast ice chunks thousands of miles fiendishly difficult — but not impossible.
Neuropsych
Inside the brains of aging dogs
In a citizen science project, thousands of pet dogs are helping scientists to understand what happens to memory and cognition in old age.
Up Next
Politics & Current Affairs
AI experts make a terrifying film calling for a ban on killer robots
An AI watchdog supported by Elon Musk releases a horrifying new film warning about the dangers of autonomous weapons in the near future.