Just a few days ago an iceberg the size of Delaware broke off of Antarctica. This process is known as calving. It isn’t the only head-scratching news bringing scientists and the public to face a stark reality: global warming is a far more serious threat than originally anticipated. Recently, scientists corrected some satellite data and revealed something staggering. The globe has been warming 140% faster since 1998. According to a recent study, we have just three years to get our act together. Otherwise, we’re doomed.

Not only does it appear that climate change is picking up speed, it’s developing in scope as well. The arctic had a record hot winter. As a result, permafrost there is thawing. As it does, it’ll release 1.89 trillion tons of carbon into the atmosphere, twice as much as it currently holds.

If we’re truly unfortunate, those trapped greenhouse gases will evaporate not as carbon, but methane, which is a far more impactful contributor to global warming. In this case, the effect on the climate will be 86 times more powerful in the next two decades than it would’ve been. Another way to look at it is: this methane will hold in 34 times the heat that carbon dioxide would have, over the next century.

As a result, we’ll see plagues, a lack of food, economic collapse, poisoned oceans, and eventually unbreathable air. Fun. What can we do to save ourselves? One option is abandoning the Earth and colonizing space. Though we may have the technological means there’s serious health problems to consider, like constant radiation exposure. We’ll have to procreate at some point, too. No one knows how a fetus will develop in a lower gravity environment.

Another option is to set a radical plan into motion. A worldwide policy to transition to clean energy as soon as possible, and set up devices that suck greenhouses gases right out of the air. Easier said than done. What stands in the way isn’t a lack of technology, but political will. 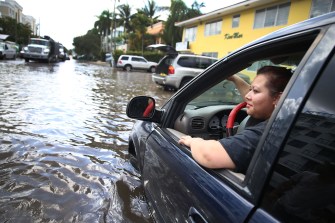 New report finds that global flooding may be the least of our climate change problems. Getty Images.

Even if we do survive somehow and the Earth’s climate is stabilized, the threat menacing our world won’t be gone forever. In another five billion years, the sun will swell into a red giant when it runs out of hydrogen fuel. But don’t lose hope, there is a radical plan cooking (even if it’s currently half-baked).

Our sun is getting hotter over time, increasing the amount of energy that reaches Earth. It goes up about 1% every 110 million years. Doesn’t sound like a lot. But in about two billion years or so, it’s expected to start causing serious problems. Not to worry. By that time, the oceans will boil and kill us long before our planet is vaporized by its own star.

In a recent Medium segment of Ask Ethan, writer and astrophysicist Ethan Siegel answered a reader’s question about radical attempts to save our planet, when our own sun gets too hot for life on Earth to survive. He covered several different options. When the Earth is being bombarded by too much energy, large reflectors could be set up, to prevent some of it from reaching the planet. Another option is to reconnoiter the atmosphere so that it reflects the energy back into space.

The third strategy was to suck greenhouse gases right out of the atmosphere, as previously mentioned. All of these would take a lot of effort, energy, and money to maintain. Siegel then takes a reader’s unconventional, if not completely off-the-wall question seriously: could we move the planet into an orbital sweet spot once Earth no longer inhabits the Goldilocks Zone? Since we have hundreds of millions of years until we have to worry about it, we could have the technology in place by then. That’s if we don’t snuff ourselves out or if the planet doesn’t shake us off, in the meantime. 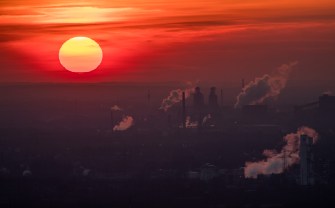 Sucking greenhouse gases out of the air would be costly in many ways. Getty Images.

Moving the Earth would be a permanent solution, as the other plans require a consistent upkeep. And moderate temperatures would ensure the Earth remains hospitable. Siegel calculates that we’d have to move the Earth 164,000,000km (102 million miles) to put it back in the safe zone. No biggie. We’ll just have to collect the entire amount of energy humanity creates collectively and multiply it by about 500,000.

Where might we procure such energy? With a solar array in space. But it better be a mighty good one. It would need to collect 4.7 × 10³⁵ Joules of energy at 100% efficiency, for over two billion years. And it’ll need to be big… with a surface area equivalent to about 10 Earths.

An enormous ion rocket, or perhaps a colossal array of them, could theoretically do the pushing. Such a move would alter our orbit, increasing the year by 14.6%. That’s a 418 day year. We’d have to slow the planet’s velocity 28.5 km/s to offset this. Also, the Sun would appear about 10% smaller in the sky. The tides would change as well. They’d be a few centimeters weaker.

It’s possible according to physics. But this would require extremely advanced technology. Though it seems fanciful, Siegel’s plan challenges us in our own time to think radically in order to save ourselves, since it appears that we have less time than we thought to meet the current climate crisis.

Want to find out how to engage skeptics? Click here:

What’s So Special About a Golden Banana?