For over thirty-five years, Lauren Slater has taken drugs to treat depression. A psychologist by training, this mood disorder hasn’t slowed her prolific career. The author of nine books, Opening Skinner’s Box (2004) was nominated for a Los Angeles Times Kirsch award. In her latest outing, Slater reports on what’s been going inside of her body—and what these drugs do to all of our bodies.

Blue Dreams: The Science and the Story of the Drugs That Changed Our Minds is a history of psychotropic drugs covering our clinical (and not-so-clinical) attempts of treating psychological disorders. Beginning with Thorazine, Slater dives into the origins of lithium, antidepressants, and SSRIs, devoting a chapter to the placebo effect and two to psychedelics.

Even though we’ve spent two centuries chemically intervening with human biology to treat anxiety and depression—or, as they were previously known, “nerves”—we know surprisingly little about how to treat them. In many ways, the diagnoses create the disease, which creates lucrative opportunities for Big Pharma. The most enlightening (and frightening) detail Slater reveals is how much guesswork occurs in this multibillion-dollar industry.

Part of the problem, Slater told me from her Massachusetts farm, is that unlike many physical diseases, there are no means for physiologically measuring depression. The one potential marker, cortisol (which is implicated in a recently proposed assessment, melancholia), was rejected for inclusion in the psychiatric bible, DSM-V. As she writes,

Lacking blood, tissue, or cells, psychiatry has had no choice but to retreat into pure description.

That means the 300 million people suffering from depression worldwide are being treated without an accurate assessment of their problem. This is particularly troubling in an industry in which psychiatrists see four to six patients an hour when scribbling down scripts—doctors interrupt patients within twelve seconds of an explanation, making a thorough examination impossible—instead of engaging with one patient in talk therapy. The financial incentive is not there even though the latter has proven to be a more potent therapy.

Still, the general public imagines medicine on a continual forward march toward better care, even though it’s been decades since we’ve experienced a pharmacological breakthrough. We tend to treat the past, even the recent past, as the dark ages, she says.

An upward trail of progress is really a myth. There were treatments in the past that we may look upon as barbaric or as ill-found, but that worked, and there are treatments in the present that are barbaric and don’t have any real science behind them. And sometimes those work too [laughs]. Psychiatry has been looking at the somatic substrates of suffering for thousands of years and there’s been hits and there’s been misses—more misses than hits, but it’s not like now we’re in the age where all we have are hits.

Lobotomies, she continues, were barbaric but still helped some people. Today bilateral cingulotomies, a close cousin to lobotomies, are still used to treat depression. Our most prescribed treatment, antidepressants, appear to suffer from novelty bias: a recent meta-analysis of 522 trials with over 116,000 participants discovered that newer drugs perform better than older ones, but the effects wear off as time goes by.

Which is a problem Slater addresses, both through her own experiences with Prozac (and other drugs) and her reporting on clinical studies. As with lobotomies, the most popular drugs on the market are speculative since specificity is impossible given the fact that there are no measurable biological markers to target.

Consider selective serotonin reuptake inhibitors (SSRIs), which are used to treat major depressive disorder, obsessive-compulsive disorder, PTSD, chronic pain, eating disorders, and a host of anxiety disorders. As Slater puts it, the category “does more to conceal than to reveal.” That’s because 95 percent of the body’s serotonin is produced in the gut, not the brain. Serotonin interacts with many systems, including those producing dopamine, norepinephrine, and acetylcholine, making it impossible to target how serotonin is interacting with the rest of your body.

This has not slowed prescriptions. By 2020 the global depression market is predicted to generate revenues of $16.8 billion. Lithium, a chemical element that, in precise doses, has had clinical success in treating depression, has never been approved by the FDA (except for manic-depressive disorder). As with script-writing psychiatrists, the profit motive is gone—you can’t patent an element.

Amazingly, we are born with an extremely powerful polypharmacy right inside of our heads: the placebo effect. Simply believing a drug is working releases a cascade of endogenous opioids with potent healing properties. While the meta-analysis above revealed that antidepressants perform slightly better than placebo (albeit with a caveat: most of the studies included were funded by the pharmaceutical industry), time and again inert substances heal. 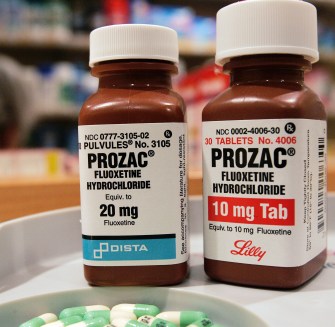 The British Medical Journal (BMJ) sent the U.S.Food and Drug Administration documents submitted by an anonymous source that seem to show a link between Eli Lilly and Co.’s Prozac (fluoxetine) and suicide attempts and violence. (Photo by Stephen Chernin/Getty Images)

Slater writes about the incredible case of Mr. Wright, who was so riddled with orange-sized tumors from advanced lymphatic cancer in 1957 that his doctor wrote him off for dead. Then a new potential cancer cure, Krebiozen (horse serum) was being entertained. Wright begged for and received a dose. Three days later he was walking around with tumors the size of golf balls. Another week passed. His tumors were gone.

Two months later a news report labeled Krebiozen a failure. Wright’s tumors returned. On his next visit, his doctor lied and informed him that that news report was actually false; he then injected Wright with sugar water, telling him it was Krebiozen. Incredibly, Wright went into remission again. A few months pass, another news report, another hospital visit. Before his doctor tried another trick, Wright passed away.

Our brains are capable of producing some endorphins in such quantity and have such quality that we could undergo extreme surgeries with no pain. What it suggests is that our brains are so much more amazing than we think or are even able to think. We can’t even begin to conceive of the power that is within our brains.

What if these drugs are the most expensive placebos on earth? Problem is, the side effects are real. Slater might be suspicious about the intention of the pharmaceutical industry and the psychiatrists that feed on it, but she also credits these pills for saving her life. Depression might not currently be measurable, but it is real.

Which is the same dilemma hundreds of millions of people across the planet are facing. Some find effective relief from antidepressants. Others do until they don’t. The shortened lifespan, metabolic disorders, memory issues, suicidal tendencies, and immune problems that coincide with sustained usage is all too real for many. As Slater notes, every year the number of prescriptions rise, yet so do rates of depression. Our current interventions are not as effective as we need them to be, which means we need to look elsewhere.

Slater does believe hope is around the corner in the form of the burgeoning clinical literature of psychedelics such as psilocybin, MDMA, and ketamine—a topic I’ll address in part two of this story next week.

NASA’s Twins Study is critical to understanding what happens to the human body after a prolonged period in space.