But astrophysicists, by contrast, know very little about the life history of galaxies since it is so difficult, even with our supercomputers, to calculate the motions and evolution of hundreds of billions of stars all at once. There is considerable uncertainty about how galaxies first formed and how they evolve. Ironically, the Milky Way galaxy comes out every night, clearly visible as a gigantic swath of light cutting across the entire night sky, but physicists are clueless about the precise way in which it formed and evolved.

One interesting piece of data, however, has come from analyzing our nearest galactic neighbor, Andromeda. The results of a five-year study of a very thick disc of older stars within the Andromeda Galaxy has yielded results that will essentially give us a greater understanding of how these galaxies form. The Andromeda Galaxy has often been referred to as Messier 31, M31 and even NGC 224 and is in fact the nearest spiral galaxy to our own at a distance of 2.5 million light years away or 1.46962495 x 10^19 miles. Last year, a team of astronomers reported that Andromeda was formed out of the collision of two smaller galaxies between 5 and 9 billion years ago. (We now know that galaxies often collide and in fact cannibalize or devour smaller galaxies. It is believed, for example, that our own Milky Way galaxy will eventually collide and merge with the larger Andromeda galaxy billions of years from now, eventually creating a gigantic elliptical galaxy from the collision.) 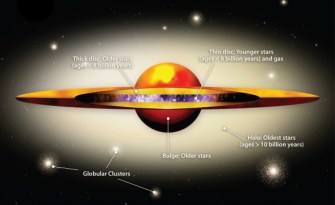 The Andromeda galaxy however is not alone and in fact is a member of the Local Group which is a group of more than 30 galaxies including the Milky Way and is about 10 million light years in diameter. It’s estimated that over half (approximately 70%) of the total stars within the Andromeda Galaxy currently reside within the stellar disc. The stellar disc of Andromeda is relatively flat and surrounding the central bulge of the galaxy which is comprised of much older stars that formed billions of years ago. The generalized formation of these discs have in a sense been a mystery and otherwise not well understood even though we understand the composition and evolution of the galaxy itself.

Today, a team of astronomers utilizing the Keck Observatory in Hawaii have for the first time observed a thick disc in Andromeda. This is actually quite interesting because the findings and results will now give us a sneak peek into all of the processes in the overall formation of these types of galaxies including our own. According to the team, they “analyzed the velocities of individual bright starts within the galaxy and were able to observe a group of stars tracing a thick disc — distinct from those comprising the galaxy’s already-known thin disc — and assessed how these stars differ from thin-disc stars in height, width and chemistry.” We already know that galaxies such as the Milky Way and Andromeda are composed of both thin and thicker stellar discs with the thicker one consisting of the older stars. Astronomers however were unable to study the thick disc of the Milky Way because we basically had a difficult time seeing it. But, the discovery of the disc within Andromeda will now give us a glimpse into how it and our own Milky Way has evolved into it’s present form.

Michelle Collins, A PhD student at Cambridge University’s Institute of Astronomy has led the research for this discovery. She recently stated, “The classical thin stellar discs that we typically see in Hubble imaging result from the accretion of gas towards the end of a galaxy’s formation. Thick discs, however, are produced in a much earlier phase of the galaxy’s life, making them ideal tracers of the processes involved in galactic evolution.”

My webmaster, Michael Phillips was able to get in touch with Dr. Collins to learn more about the moment that the team made their discovery. Dr. Collins stated: “When we realized we had detected the thick disc in Andromeda we were really excited. Until now, our best chance of understanding the evolution of stellar discs was in the Milky Way, where we can’t get a truly panoramic view of the component. So this disc in M31 presents us with a fantastic opportunity to better understand the nature of this structure. This is really important, because this kind of disc probes an earlier epoch of galaxy formation than the classical, thin stellar disc, so understanding it’s formation and subsequent evolution will allow us to really get a handle on the way galaxies like the Milky Way and Andromeda have been assembled over cosmic time.”

By studying Andromeda, hopefully, they hope to better understand how our own Milky Way galaxy formed about 10 billion years ago.

This small phase 1 study suggests that CRISPR-engineered T cells are safe and potentially effective, but there is a long way to go.
Up Next
Politics & Current Affairs

THIS week a powerful section of Britain’s political class demonstrated beyond any remaining doubt that they now inhabit a parallel universe to the rest of us. For most people out […]