Which tech giants pay most fairly? What company’s empoyees can’t wait to leave their jobs? Thousands of people working in tech provided a fascinating snapshot of their industry in a new survey that comes courtesy of Blind, the anonymous chat app that encourages employees to share work talk and information about their companies.

It turns out that among over 4,000 people polled, the happiest with their pay worked at Netflix, with over 70% of the people feeling adequately compensated. According to Glassdoor, a senior software engineer at Netflix would take in more than $210,000 per year.

Dropbox and Facebook come in second and third on the pay satisfaction list, while companies like WalmartLabs, Paypal and even Twitter find themselves rounding out the bottom. In contrast, a senior software engineer at WalmartLabs would earn $131,00 – not a paltry amount by most people’s standards but the tech industry is known for its high salaries. 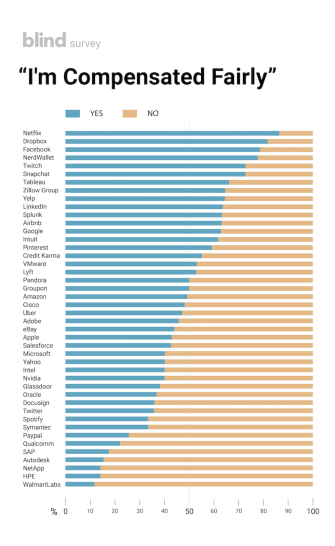 Overall, about 49% of the polled felt there were not being paid fairly.

Not surprisingly, Netflix also came out on top of companies where workers were least interested in changing their jobs. Facebook, LinkedIn and Snapchat were also near the top. 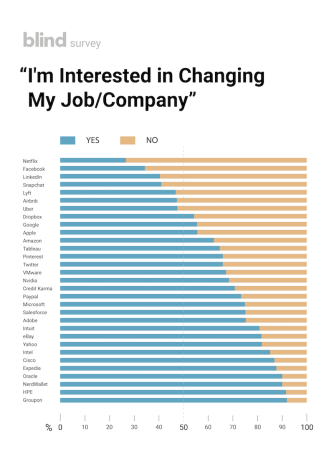 Which companies would people flee if they could? Groupon got that honor, with about 90% thinking of leaving it. Among top tech companies, Microsoft had the most people who’d like to leave – at 75%.

Interestingly, when job pay satisfaction and desire to change jobs were mapped together, the survey revealed that employees at Apple, Microsoft and Amazon are not all that happy with the money they are making and would consider going elsewhere. 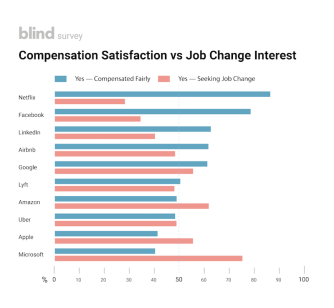 Of course, it also bears saying that the information in the survey was obtained through an anonymous app and does not necessarily reflect the full reality within each company.

The high pitches from the flute and the harp would reach your ears before the notes from the tuba and the cello.
Up Next
The Present

North Korea Is Only a Threat if the U.S. Keeps Provoking Kim Jong-un

North Korea has a long history of making bellicose threats that defy global norms. So does that mean the country’s leaders are irrational, and will act irrationally?