Rowan Jacobsen recently wrote an obituary for one of Earth’s natural wonders: the Great Barrier Reef. “The Great Barrier Reef of Australia passed away in 2016 after a long illness. It was 25 million years old,” he wrote in Outside. But publishing its obituary might be a bit premature.

If you ask scientists, like Russell Brainard, chief of the Coral Reef Ecosystem Program at NOAA’s Pacific Islands Fisheries Science Center, he told he Huffington Post in an interview, “we’re very far from an obituary.” 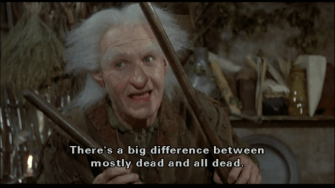 The Reef has suffered great losses from coral bleaching and the crown-of-horns starfish, which is a pest to coral reefs. Scientists have seen a 22 percent die-off, and estimate by 2022 the Reef will lose half its coral if nothing is done.

It’s important to note scientists have long been laying out expectations for a future world changed by Earth’s shifting climate. Rising CO2 levels will acidify the oceans, stunting the growth of coral reefs, causing sea life to die off. The warmer atmosphere will affect air travel, agriculture, and weather. They’ve been telling us the facts in research papers that garner little attention, so maybe a little drama is warranted.

I can say from experience, an article with the words “climate change” in the title is usually dead on arrival. That’s not to say people don’t care about climate change, it’s just depressing to think about. There’s that “yeah, yeah, we get it” brush-off I often hear and some may think they can’t do anything to change the fate of our planet. It’s true, much of what will dictate the future of life on this planet will be the policies made in big rooms by elected officials (let’s hope they’re science literate).

Many scientists may shake their head at the sensationalism of Jacobsen’s obituary for the Great Barrier Reef, but its impact has been felt through millions of shares and pieces adding their own commentary discussing the reef. The point is people are talking.

So, publishing its obituary may have been a bit premature, however, that fact should not diminish its impact. The Great Barrier Reef is in desperate need of relief.

The question remains if the obituary will help us take note or make us fall into despair about our situation on the only planet that we know can support life.

Related
Starts With A Bang
The Universe’s most unbreakable symmetry
The combination of charge conjugation, parity, and time-reversal symmetry is known as CPT. And it must never be broken. Ever.
13.8
The weirdness of quantum mechanics forces scientists to confront philosophy
Though quantum mechanics is an incredibly successful theory, nobody knows what it means. Scientists now must confront its philosophical implications.
Neuropsych
Why is a Starbucks loyalty rewards program making customers so angry?
The rewards price to get a free cup of hot coffee at Starbucks is going up.
Empowering growth
7 essential management training topics for every team leader
From emotional intelligence to problem solving, these management training topics will set team leaders up for success.
Thinking
What if you could rewire your brain to conquer suffering? Buddhism says you can
For Buddhists, the “Four Noble Truths” offer a path to lasting happiness.
Up Next
The Future
What Do a Robot’s Dreams Look Like? Google Found Out
They may look odd, but it’s all part of Google’s plan to solve a huge issue in machine learning: recognizing objects in images.