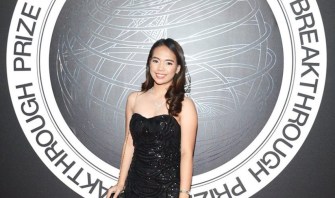 The 12th grader, who’s 18, lives in Tacloban City, Philippines, and made the video below as her entry in the Breakthrough Junior Challenge 2017. Spoiler alert: She won. Small wonder. For any of us struggling to wrap our minds around brain-bending relativity, her video explaining how reference frames work is so simple, so clear, and so very welcome.

Such Zen clarity is deceptive: It takes a lot of work. Andales tells Asian Scientist that she went through 20 drafts and about 100 hours of animation and shooting to arrive at the final video. And it doesn’t hurt to be brilliant. The teenager, when asked about her plans, says, “Right now, I’m eyeing fundamental or particle physics.”

Related
Starts With A Bang
The Universe’s most unbreakable symmetry
The combination of charge conjugation, parity, and time-reversal symmetry is known as CPT. And it must never be broken. Ever.
13.8
The weirdness of quantum mechanics forces scientists to confront philosophy
Though quantum mechanics is an incredibly successful theory, nobody knows what it means. Scientists now must confront its philosophical implications.
Neuropsych
Why is a Starbucks loyalty rewards program making customers so angry?
The rewards price to get a free cup of hot coffee at Starbucks is going up.
Empowering growth
7 essential management training topics for every team leader
From emotional intelligence to problem solving, these management training topics will set team leaders up for success.
Thinking
What if you could rewire your brain to conquer suffering? Buddhism says you can
For Buddhists, the “Four Noble Truths” offer a path to lasting happiness.
Up Next
The Present
How to Win Your Opponent’s Respect? Talk, Don’t Type
A new study found that listening to other people speak—as opposed to just write—tends to make us think they’re more mentally capable.