When a patient is in serious need of pain relief, doctors turn to strong opiates, painkillers that include morphine, oxycodone, pethidine, and tramadol. After surgery or major injury, they help a patient recover, and in the last hours of life for many, morphine in particular brings merciful relief from otherwise untreatable pain. Though these powerful narcotics are infamous for the frequency with which they’re abused, their importance in a medical setting is indisputable. They all come from a single source: the opium in poppy plants. Until now. 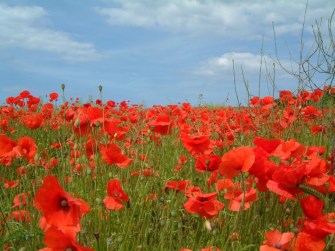 The awareness of poppies’ value goes way back. The earliest reference is from 3400 B.C. when the plants were called Hul Gil, or “the joy plant” in lower Mesopotamia (southwest Asia). It’s grown today primarily in the dry, warm climate of a just narrow stretch of mountains in Central Asia, and more recently Colombia and Mexico. Because the world’s supply of opium is dependent on the poppies’ unreliable crop size, and because much of it is diverted into the even-more lucrative production of heroin, it’s an expensive, hard-to-control substance that keeps the cost of painkillers high and makes access to pain relief difficult for 5.5 billion people according to the World Health Organization.

Enter a remarkable young professor from Stanford named Christina Smolke, a new star in the field of synthetic biology.

Smolke and her team (STANFORD)

Smolke has developed a method for synthesizing opiates from yeast, a far more readily available source than opiates. Her technique could radically reduce the cost of producing opiates, by a factor of ten, and may also provide a way forward for producing other medicines currently derived from plants.

Synthetic biology views cells as production modules, tiny factories that can be retooled to output specific compounds of value. Smolke is a pioneer in the field, gifted at creating complex chemical interactions, or “pathways.”

Smolke has always enjoyed making things, and eventually gravitated to synthetic biology as a field in which the possibilities for constructing brand-new things was wide-open. She recently spoke to Melissa Pandika of OZY, telling her, ““The idea of building with biology really spoke to me.” For six years, starting when she was just 28, Smolke ran her own lab at Caltech. Opiod production wasn’t her immediate goal.

The underlying tools — really, processes — that make made her breakthrough possible didn’t exist when she started. To begin with, her frustration at the hit-and-miss nature of experimentation led her to develop a modular and extensible RNA-based platform in 2012 that could make the control of genes in pathway production more consistent and predictable.

After that, in search of a worthy challenge, Smolke decided to see if she could develop a complicated 20-gene opiod pathway. Since science hadn’t yet nailed down its details, though, Smolke and her team decided to try and engineer their own, from a hodgepodge of enzymic sources including yeast itself, medical plants, bacteria, and mammals. They wound up with their miracle strains of yeast that can produce small amounts hydrocodone and thebaine (for oxycodone) enzymes from glucose.

Smolke expects to achieve poppy-free, commercial-scale production of opiates in a few years, and is now casting her attention towards other synthetic medicines, as well as a few inventions of her own, mentioning a non-addictive form of opium as one dream drug she’d like to see.

Fans of Breaking Bad — and those mindful of illegal-drug issues in general — may be thinking, “Oh, great. Now anyone can produce controlled substances at home.” Not to worry. Smolke’s process requires a highly controlled environment that’s not readily duplicated. So leave that old beer-making rig in the basement.

Given the merciful relief opiates provide to those in severe pain, Smolke’s immediate achievement is a hopeful moment for those 5.5 billion people without access to such relief. And it’s even more exciting as a method that may point a way forward to the synthesis of countless other life-changing medications.

People living in non-industrialized societies don’t get pimples.
Up Next
Strange Maps

All Pop Music Since 1880 in One Clickable Map