There are a number of possible cataclysms that could wipe out the human race. Take the expansion of the sun into a red giant. That’ll will eventually absorb the Earth. This event is set to occur in about 7-8 billion years. The only way to escape it, as Elon Musk and others argue, is to become an interplanetary species—if not an intergalactic one. Would such a move forever safeguard the human race?

When the universe will end has been a topic of discussion among theoretical physicists for some time. What they can agree on is, it’s likely to occur somewhere between 2.5-22 billion years from now. We’ll have to find another universe to inhabit before that, if such a thing exists and if it’s habitable to our species.

There are three prevailing theories on how the universe will end. One is the Big Crunch. This theory states that at some point, the universe will stop moving in one direction and start shrinking back in on itself, perhaps condensing into the singularity once more.

Another is the Big Rip, where the universe continues to spread out and accelerate at an ever-increasing velocity, until it tears an enormous rend into its own fabric, spreading catastrophe everywhere. This would destroy not only stars but black holes, planets, and even whole galaxies. The universe would literally rip itself to pieces.

The last is called the Big Freeze. This is the “heat death” thermodynamics postulates. Until now, it was considered the most likely scenario. It originates with the second law of thermodynamics, which states that the entropy or chaos in a system will increase, until it overtakes the entire system.

The engine will someday seize up for good, the human body will age and die, and the universe will spread out to such an extent that gases no longer congregate, meaning stars will no longer form. Without birthing new stars and when all the old ones die out, the universe will become a cold, empty, lifeless void.

Recently, a team of Harvard physicists stated that this is no longer the likeliest scenario. Instead, according to them, the cosmos is likely to end in another Big Bang. But this event will be much different than the one that birthed the cosmos. The team’s findings were published in the journal Physical Review D. 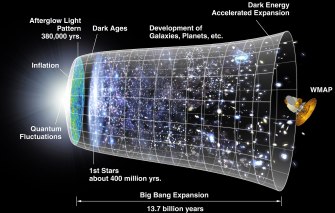 Turns out, the universe could fall to pieces internally, depending on what occurs with the Higgs boson. Known as the “God particle,” the Higgs is a miniscule quantum particle that lends other, larger particles their mass. Should the Higgs boson become destabilized, the entire universe would erupt in a massive explosion, incinerating all and everything from one end of the cosmos to the other. So does that mean we should all get our affairs in order?

The illusive Higgs boson was only discovered in 2012, although it has been theorized to exist as far back as the 1920s. Using a Large Hadron Collider and smashing subatomic protons together, scientists were able to catch a glimpse of it. So what might cause the Higgs boson to become unstable? 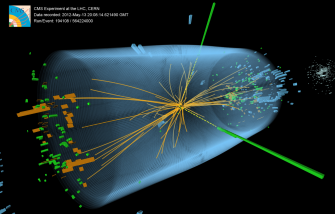 A 3D model of the detection of the Higgs boson, which occurred during a proton-proton collision in the Large Hadron Collider. Credit: CERN.

Harvard researchers conceive of a space-time curvature around a black hole, somewhere deep within the universe. Recent astronomical observations lead us to believe that a supermassive black hole sits at the center of almost every galaxy, including our own. It’s thought that clusters of other black holes reside near them and are eventually absorbed by them. In fact, a baker’s dozen was just discovered hanging around a supermassive black hole, near Sagittarius A, a densely-packed region close to the center of our galaxy.

Since these giant anomalies don’t operate according to the laws of standard physics, ablack hole could theoretically change the Higgs boson’s mass, destabilizing the field. Physicist Joseph Lykken and the late Stephen Hawking were the first to propose the collapse of the Higgs boson field as a potential doomsday scenario. “It turns out we’re right on the edge between a stable universe and an unstable universe,” Lykken told the New York Post. “We’re sort of right on the edge where the universe can last for a long time, but eventually, it should go ‘boom.’”

To learn more about the Higgs boson, click here.

Previously, only the brightest and most active galaxies could pierce the obscuring wall of cosmic dust. At last, normal galaxies break through.
Up Next
Career Development

4 Performance Goals for Employees to Strive For

Setting short-term performance goals for employees can provide invaluable benefits to your company or organization in the long run. In addition to providing a written set of clear, achievable objectives […]