Adélie penguins (Pygoscelis adeliae) have long been thought to be disappearing from our planet due to human encroachment on their territory, and especially from global warming affecting their food source, mainly krill, which are disappearing more rapidly as sea ice in the region ebbs.

Satellite images tipped scientists off to the presence of the colonies; they detected large patches of penguin feces, or guano, then sent a team to the area known as Danger Islands off the northern tip of the Antarctic Peninsula.

750,000 mating pairs are there—a total of 1.5 million penguins; when the team studied ariel photographs since 1957, it appears that the population has been stable since at least then.

Upon discovering the guano patches, they had to go through even more images since the initial satellite pictures were too blurry. What they discovered really shocked them.

Dr. Heather Lynch of New York’s Stony University described their surprise: “The sheer size of what we were looking at took our breath away.”

“We thought, ‘Wow! If what we’re seeing is true, these are going to be some of the largest Adélie penguin colonies in the world, and it’s going to be well worth our while sending in an expedition to count them properly.” 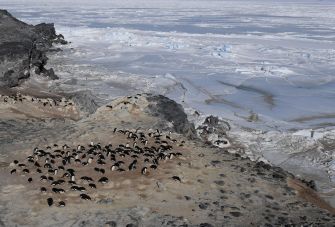 An Adelie penguin colony beside the frozen Ross Sea area near McMurdo Station, Antarctica on November 11, 2016. (MARK RALSTON/AFP/Getty Images)
That was no easy feat; even at its warmest, these waters are full of thick sea ice that makes it difficult for ships to make it through. Once they made it to the island, they sent out fleets of drones to capture a detailed set of high-resolution images that they could stitch, mosaic-like, into a much more complete and telling image.

The colonies, believed to be the 3rd and 4th largest in the world, are likely thriving precisely because of their remoteness from human beings. Other colonies in other locations that are being compromised by humans are definitely on the decline, and the penguin species was not known to exist on the Danger Islands at all, so this was a delightful bit of serendipity, followed by hard work and perseverance.

Related
13.8
The weirdness of quantum mechanics forces scientists to confront philosophy
Though quantum mechanics is an incredibly successful theory, nobody knows what it means. Scientists now must confront its philosophical implications.
Neuropsych
Why is a Starbucks loyalty rewards program making customers so angry?
The rewards price to get a free cup of hot coffee at Starbucks is going up.
Empowering growth
7 essential management training topics for every team leader
From emotional intelligence to problem solving, these management training topics will set team leaders up for success.
Thinking
What if you could rewire your brain to conquer suffering? Buddhism says you can
For Buddhists, the “Four Noble Truths” offer a path to lasting happiness.
Hard Science
Solved: 500-year-old mystery about bubbles that puzzled Leonardo da Vinci
The solution involves the infamous Navier-Stokes equations, which are so difficult, there is a $1-million prize for solving them.
Up Next
Starts With A Bang
If The Universe Is 13.8 Billion Years Old, How Can We See 46 Billion Light Years Away?
Distances in the expanding Universe don’t work like you’d expect. Unless, that is, you learn to think like a cosmologist.There are a few fundamental facts about the Universe — its origin, its […]