Tamiflu (generic: oseltamivir), the go-to drug for combatting influenza has a new challenger.

Japanese drugmaker Shionogi has announced that test results are in: its drug kills the flu virus in 24 hours. With one pill. 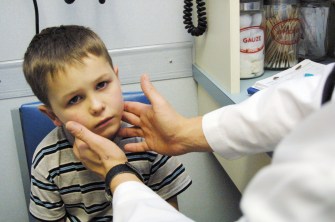 In a year that’s seen an epidemic—even pandemic—of flu cases, some resulting in unexpected deaths of people not in high-risk groups, the influenza outbreak in the United States this year has reached levels not seen since the swine flu epidemic of 2009.

Though it likely won’t be for sale until May 2018 in Japan and not in the United States until 2019 or very late 2018, it could be a sign of better news to come.

The key is that by inhibiting the enzyme that the flu virus needs in order to replicate, it kills the virus within a human in 24 hours. The symptoms continue for about the same amount of time as when Tamiflu is used, however, but they’re lessened and begin to go away faster. And both drugs lessen the effects of the flu versus no drug at all.

Tamiflu-maker Roche was involved in the study and development so it will be the company marketing this, in addition to Tamiflu—at least in the United States.

Given that the flu vaccine this season was only 36% effective, this is especially welcome news.

Related
13.8
The weirdness of quantum mechanics forces scientists to confront philosophy
Though quantum mechanics is an incredibly successful theory, nobody knows what it means. Scientists now must confront its philosophical implications.
Neuropsych
Why is a Starbucks loyalty rewards program making customers so angry?
The rewards price to get a free cup of hot coffee at Starbucks is going up.
Empowering growth
7 essential management training topics for every team leader
From emotional intelligence to problem solving, these management training topics will set team leaders up for success.
Thinking
What if you could rewire your brain to conquer suffering? Buddhism says you can
For Buddhists, the “Four Noble Truths” offer a path to lasting happiness.
Hard Science
Solved: 500-year-old mystery about bubbles that puzzled Leonardo da Vinci
The solution involves the infamous Navier-Stokes equations, which are so difficult, there is a $1-million prize for solving them.
Up Next
Leadership
Desire Success? Start Asking Dumb Questions
Investor, advisor and author Tim Ferriss says that often times the smartest questions are the “dumbest” — the ones that no one asks because they are afraid of being shamed. In a […]