Until 2011, there were 3,000 wild Olympia oysters per square meter in northern San Francisco Bay. They were filter feeders, cleaning seawater of excess nitrogen and pollutants — each adult can clean up to 50 gallons of water per day — allowing sunlight to penetrate seawater and helping important aquatic food plants like eelgrass grow. So when nearly the entire local population of this keystone species disappeared from the bay that year, it wasn’t just horrifyingly and sad — it was mysterious, and alarming. Now we know what happened to them. It was “rivers in the sky.” 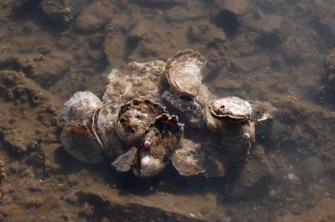 Atmospheric rivers (ARs), or “rivers in the sky” aren’t new phenomena, but as with other extreme weather brought on by climate change, the oyster die-off is seen as frightening evidence that these systems keep growing more powerful and becoming a cause for concern.

Rivers in the sky are long, narrow bands in the atmosphere that carry most of of the water vapor existing outside the tropics, according to NOAA. They’re from 400 to 600 kilometers wide, and usually carry an amount of moisture that’s roughly equivalent to the average water found at the mouth of the Mississippi River. ARs produce rain or snow when they make landfall, and most of the time, they’re beneficial, supporting area water supplies by delivering much-needed precipitation. As such, they’re a key element of the global water cycle. 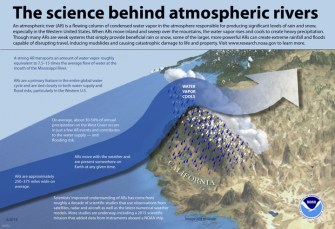 But sometimes ARs can be destructive. A strong one can hold up 7.5 to 15 times more water, and when an AR stalls over an area, it can produce floods, mudslides, and other serious damage. The stoner movie Pineapple Express actually takes its name from the powerful atmospheric river that periodically carries devastating amounts tropical moisture from near Hawaii to the West Coast of the U.S.. The earliest reported real-life Pineapple Express occurred in 1862, and the most recent in 2014. Stronger ones appear to be becoming more frequent as a result of climate change. 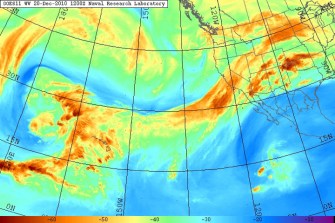 The disappearance of the oysters was weird, because it didn’t seem like anything extreme had happened in the area that could have caused it. Scientists at the University of California, Davis set out to solve the mystery, beginning with identifying the kinds of stressors that could potentially cause an oyster die-off like this. They studied how oysters respond to changes in temperature, dissolved oxygen, and salinity. It turns out they’re highly sensitive to changes in seawater salinity. So what could have caused an extreme enough change in the level of salt in their water to affect them so profoundly?

One of the primary drivers for the composition of seawater in San Francisco Bay is the freshwater runoff from the shore, because it dilutes the water’s salt content. The Davis team looked at precipitation levels prior to the die-off and found a smoking gun — three smoking guns, actually — in March 2011, a few months before the oysters’ absence was discovered. Three long-lasting ARs and 10 shorter ones occurred in that month, accounting for 69.3% of all the precipitation within the San Francisco Bay watershed. They caused an extreme discharge of fresh water into the bay beginning Match 16 and peaking on March 26th. The result, according to the report: “This discharge resulted in a protracted low salinity event that exceeded the critical low salinity tolerance for wild Olympia oysters.” It killed almost 100% of them.

Sunrise over the bay, from Mt. Tamalpais (MARK GUNN)

Since 2011, the oysters in the bay have rebounded in numbers, though their reproductive rate is still short of where it was prior to the ARs. And troublingly, as the report notes, “…climate models suggest that this region will experience increased frequency and intensity of precipitation extremes which may affect the persistence of this recovering population.

The fact that the massive rivers in the sky of March 2011 wiped out almost an entire population of Olympia oysters is chilling, if more and more extreme weather is what lies ahead. The accelerating pace of climate change means that understanding the ways in which extreme weather impacts organisms and natural ecosystems is only going to become more and more critical as we struggle to ensure our own survival.

Blissful ignorance can be a rational choice.
Up Next
Technology & Innovation

Could life on Earth have spawned more than once?