Diamonds, in addition to being beautiful gemstones, hold great symbolic weight in our culture. Besides revealing wealth and prosperity, they symbolize an enduring commitment. They weren’t always a symbol of a marital engagement, however. Rings themselves, but not necessarily diamond ones, have been used to telegraph betrothal since Roman times. It wasn’t until the Archduke Maximillian of Austria offered a diamond engagement ring to Mary of Burgundy in 1477 that such a gesture entered the Western psyche.

Even then, it wasn’t a common practice until 1947, when the De Beers advertising campaign married the diamond ring to engagement with its now-famous slogan, “Diamonds are forever.” Ever since, a diamond ring has become the standard accessory for a marriage proposal, silently communicating a man’s devotion to and love for his fiancée. Surprisingly, despite the weight they carry in our culture, we don’t actually know very much about the gemstones themselves.

For instance, you may have been taught that diamonds are formed from a piece of coal that endures tremendous pressure for a considerable length of time. However the gems are actually made of pressurized, crystallized carbon and are created in one of four ways—none of which have much to do with coal. There are two main places diamonds form, either inside the Earth or outside our atmosphere in space. So how exactly do they form? 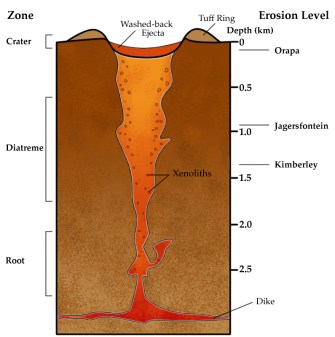 Diamonds under Earth’s surface are formed from igneous rock within vertical pipes, much like a natural shaft, either in Earth’s mantle or in subduction zones—where two tectonic plates come together and one is forced down underneath its counterpart into the mantle.

Almost all the diamonds that have been mined today were formed in Earth’s mantle, under a tremendous amount of pressure and incredible heat—specialized conditions that mean there’s a limited number of places that they can form. Diamonds in the mantle form at least 90 miles (150 km) down, at temperatures of 2,000 Fº (1,050 Cº) or above. Now and again, deep-source volcanic eruptions push the diamonds up to the surface via fast-traveling magma, which passes through what is called a diamond stability zone, breaking off pieces of rock known as xenoliths and carrying them—and the diamonds they contain—to the surface. Miners have called these “volcanoes of opportunity”.

Telltale shafts of volcanoes, called lamproite or kimberlite pipes, signal to prospectors that diamonds may be present—and where you find one, you usually find many more. What’s incredible about these deep-origin diamonds is that water or other substances can get caught in them as they’re forming, giving geologists clues about what exists far below Earth’s surface. In fact, a recent paper published in the journal Science reports the finding of a super-dense type of crystalized ice (ice-VII) inside a diamond. This kind of ice is so-far found nowhere else on Earth, but may be common elsewhere in the solar system, such as on Jupiter’s moon Europa.

Diamonds closer to the crust

The second way these precious stones are formed is in subduction zones, which are created by the epic collision of tectonic plates. When two plates meet and one forces the other underneath it, great pressure and temperature builds up. Here, diamonds may form much closer to Earth’s surface, around 50 miles (80 km) down. Temperatures can reach around 390 Fº (200 Cº) or higher.

Oceanic plates, due to their high density, are more likely to experience subduction and since they often carry types of rocks high in carbon and perhaps even the leftovers of former plant life (some coal), diamonds are much more likely to form. Those rocks that are subducted and make it back to the surface are thought to contain diamonds. Since few are found on the surface, and those that are tend to be small, no commercial operation currently looks for such deposits.

Meteorites are good sources of nanodiamonds. These are minuscule, each merely a few billionths of a meter wide. Large numbers of such diamonds were found by Smithsonian researchers within the Allen Hills meteorite. NASA scientists have discovered nanodiamonds contained within other meteorites as well.

Lots of carbon can be found in such space-borne rocks, and about 3% of it is usually comprised of microscopic diamonds. These rocks are thought to have been formed during collisions with asteroids and other celestial bodies. Unfortunately, nanodiamonds are too small for industrial or commercial use, at least currently.

The last way diamonds are produced is when an asteroid strikes Earth, causing the high temperature and pressure required to form these precious gemstones. Tiny diamonds have been found at many asteroid impact sites around the world, including the Popigai Crater in northern Siberia, and Meteor Crater in Arizona.

To find out about a place where you can search for diamonds yourself, click here.

There is another precious substance to be found in an odd place: gold in your brain. Here’s NASA’s Michelle Thaller with the how and why:

Related
Life
Strange life forms create an “alien” ecosystem in an abandoned uranium mine
Slimy biofilms made up of bacterial and eukaryotic life forms have taken over an abandoned, flooded uranium mine in Germany.
Hard Science
Earth has an eerie “sodium glow,” and astronomers use it to image stars
Air currents in our atmosphere limit the resolving power of giant telescopes, but computers and artificial stars can sharpen the blur.
Health
How saliva changes the flavor of food
“It’s a liquid, but it’s not just a liquid.”
High Culture
Why are flood myths so common in stories from ancient cultures around the world?
Could the prevalence of flood myths around the world tell us something about early human migration or even the way our brains work?
The Future
Space travel will radically change human psychology and spirituality
We are traveling in a realm that once exclusively belonged to the gods. Space travel will force humanity to rethink everything.
Up Next
The Best Motivation Tips for Managers and Employees, with Dan Ariely
The biggest killer of motivation in many organizations is that managers don’t always recognize the true value of good will and social utility. Psychologist and Behavioral Economist Dan Ariely says […]