In the summer of 2013, the New York Times reported that a whopping 93% of people wanted food labeled if it contained genetically modified ingredients (GMOs). Those campaigning for such labeling trumpeted this whopping number as evidence that people are worried about hybrid crops created with agricultural biotechnology.

A new survey reports similar support for GMO labeling. Only this survey teaches us something else, which is not to read too much into what public opinion surveys tell us about how concerned people might be about GMOs.

The new poll was done by Professor Jason Lusk of Oklahoma State University as part of his ongoing monthly Food Demand survey. It asks some basic questions about food, and each month tacks on a few extra questions. This time Lusk asked a representative sample of Americans “How much do you support or oppose mandatory labels on foods produced with genetic engineering?” 82% favored such labels. Pretty strong, right? But Lusk has been doing this long enough to know how little a few quick questions really reveal about public concern regarding GMOs. And to be sure the rest of us got that message, he also asked “How much do you support/oppose government mandated labels of food containing DNA?”

You might want to sit down before reading the answer, because you may fall down when you do. 80% of Americans are in favor of such labels. 8 Americans in ten support government requirements for labels informing consumers that their food contains the naturally occurring chemicals that are basic chemical building blocks of life. It’s like asking if you want labels on your food telling you it contains…well…food. 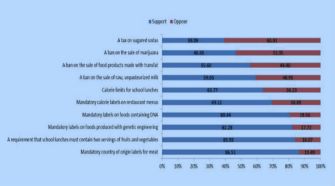 This results tells us a few things. Yes, it says that the respondents weren’t particularly science literate. It also confirms the obvious, that people want choice; if there’s something, anything, in our food, we want to know about it (86% also favored labels identifying the country of origin for meat products.). And it warns us to be wary of what quicky public opinion surveys tell us regarding how people feel about genetically modified food.

More in-depth surveys on public attitudes about GMOs find the same thing. Professor Bill Hallman of Rutgers surveyed Americans in 2013. Before mentioning the topic of GMOs, he started with the neutral question “What information would you like on food labels that is not already in there?” Just seven percent wanted labels noting the presence of genetically modified ingredients. Later in the survey, he asked people several questions to see what they knew about GMOs, which wasn’t much. Half said they knew ‘very little or nothing’ about genetically modified food. A quarter said they’d never heard of it. Then, after raising the topic, Hallman asked if they wanted mandatory labeling of food that contains GMO ingredients. This time 73% said yes. Labels? CHOICE? You BET! Who doesn’t want that!?

Those in the trenches of the GMO labeling fight will undoubtedly use Lusk’s research to suit their goals. GMO opponents will cite it to support their push for labeling, which they claim is about giving consumers choice but is really about trying to scare consumers away from a technology they oppose. Food retailers – the firms that actually have to label their products and fear lost revenues, as opposed to the biotech companies and farmers and big food processors (who actually support federal labeling guidelines) – will cite it to show that support for labeling is a mile wide and less than an inch deep.

The point here is to note two things. First, people want choice, and the research on risk perception psychology says that when we have it, any associated risk worries us less. That’s an argument I and others have made in favor of labeling, to get this distracting battle out of the way so society can make more fact-based choices about whether and how to tap the potential agricultural biotechnology has to offer.

Second, and more profoundly, the Lusk survey illustrates an important truth about human cognition that we are only just beginning to realize and begrudgingly accept. We are not the careful rational thinkers we like to think we are. People’s views are based far more on how they feel than on the facts alone. Human cognition is affective, a mix of facts and feelings, not the objective rational process we pretend it is.

The survey doesn’t show, as some pundits are derisively claiming, that people are ignorant. It just shows that whenever we’re asked to make a choice or judgment about something, we use powerful subconscious instincts and emotions to assess the meaning of the information we have (which usually isn’t very much) and come up with our decision. It’s pointless to judge this as smart or dumb, good nor bad, rational or irrational. It’s just the way it is. But it sure isn’t the smartest way to make the most informed and intelligent policy choices that will do society the most good, about GMO labeling or any other issue.

The whole isn’t greater than the sum of its parts; that’s a flaw in our thinking. Non-reductionism requires magic, not merely science.
Up Next
Surprising Science

If your aim is to get healthy, numerous studies have said it’s best not to go it alone. Take walking groups for instance, people are less likely to skip out on a daily walk if they’re being held accountable by a group.