The presentation was called “The Astrobiological Exploration of Earth and Mars” but featured the results of eight years of digging in a lead, silver, and zinc mine in Chihuaha, Mexico. The presenter was Penelope Boston, director of the NASA Astrobiology Institute in Moffett Field, Calif. It was about what they found living inside of underground crystals. No, it’s not a science-fi movie, but it is pretty cool. The ancient living organisms Boston and her team discovered in the Naica mine would give a tardigrade pause — they’re between 10,000 and 50,000 years old. And they expand the boundaries of possible extraterrestrial lifeforms and life-supporting environments. 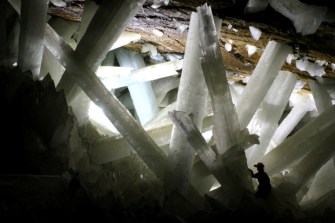 Giant crystals in the Naica mine (ALEXANDER VAN DRIESSCHE)

“The search for life elsewhere in our solar system and beyond is one of the great intellectual enterprises of our species,” says Boston in a NASA press release. “The deeper understanding of the profound biodiversity and adaptability of life here on our own planet is part of the same continuum.”

The bacteria were found floating in pockets of liquid trapped within massive crystals of calcium sulfate. The microbes are different, too, unlike any known genus. They somewhat resemble bacteria found in the surrounding cave, but that’s about it. Their closest cousins are probably previously discovered microbes found in volcanic soils, or others that somehow survive on toluene, which is basically paint thinner.

It looks like the bacteria could have been dormant at least part of the time they were encased in the crystals, but when Boston’s team brought them back to the lab, they revived them and got them growing again. Because the microbes are consistent genetically with other bacteria found in the cave, the scientists are fairly confident their presence in the crystals is not the result of some external contamination, but that they’ve really been there the whole time. And there is pretty intense, 100 to 400 meters below the surface at temperatures of 45° to 65° Celsius (113° to 149° Fahrenheit). This places the bacteria among the toughest on earth. 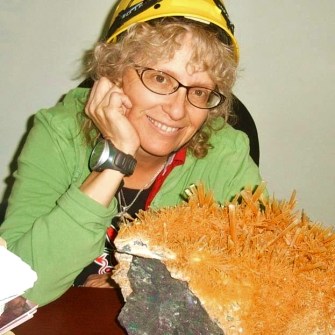 Boston tells Science News, “Any extremophile system that we’re studying actually allows us to push the envelope of life further. We add it to this atlas of possibilities that we can apply to different planetary settings.”

The implications cut both ways. On one hand, they show just how ingenious and flexible life can be at adapting to the most hostile conditions: “If you took some of these organisms from Earth and put them elsewhere, they may do just fine,” Boston notes. On the other hand, the bacteria raise concerns about how careful we’ll have to be to prevent indestructible extraterrestrial microbes from stowing away on spacecraft returning to earth.

Related
Neuropsych
Daily caffeine intake temporarily alters your brain structure
Compared to people who took a placebo, the brains of those who took caffeine pills had a temporarily smaller gray matter volume.
Thinking
Why you should laugh at yourself, according to Seneca and Nietzsche
“It is more human to laugh at life than to lament it.”
Hard Science
The violence of the Tonga eruption is a wake-up call to watch other submarine volcanoes
Out of sight, but not out of mind.
The Present
How circular economics can make us happier and less stressed
Entrenched business wisdom says that community-led economic systems are pure fantasy. Douglas Rushkoff disagrees.
The Learning Curve
The art of asking the right questions
The right questions are those sparked from the joy of discovery.
Up Next
Starts With A Bang
How flat can a planet be?
The Earth is round, Kyrie Irving. But not every world needs to be.“‘I’ll follow him to the ends of the earth,’ she sobbed. Yes, darling. But the earth doesn’t have any […]