Imagine: it’s a Friday night, and you’re heading out for a night on the town. You’re dressed, showered, and smelling nice; all that’s left is to swing by the nearest CVS—not for a pack of gum or condoms, but for a gram of cocaine or a hit of ecstasy.

Harvard economics professor Jeffrey Miron thinks this should be a plausible scenario. He tells Big Think that all drugs—including heroin, cocaine, methamphetamine, and LSD—should be legal and widely available.

One of the nation’s foremost libertarians (he wrote a book on the subject), Miron founds his argument on the basic assumption that decisions about what people can and cannot do should be left up to them: “In a free society we should allow people to consume whatever they want, no matter how dangerous, no matter how much it might be bad for them because that’s what freedom means,” he says.

But legalization makes sense policy-wise as well, he argues. By trying to discourage the negative consequences of drug use, like addiction and child abuse, we incur far worse negative outcomes than if drugs existed in a legal framework. As the war on drugs has shown, prohibition doesn’t eliminate drug use: 47% of the population reports to have tried an illegal substance at least once in their lifetimes. Instead it merely drives the market underground, and the underground market for drugs is violent, corrupt, and has poor quality control. “And in the attempt to enforce it, we have to infringe on civil liberties by basically shredding the 4th Amendment to the Constitution,” says Miron

Perhaps the best argument for legalization is that it would undermine terrorist groups and drug cartels outside the country: “The violence that we observe in Mexico, the profitability underlying the Taliban in Afghanistan—all those result from the fact that we’ve driven drug markets underground,” says Miron. “Terrorist groups make a profit by selling their protection services to the drug traffickers; the drug traffickers get the protection, and the terrorists get the profits.” Not that Mexican traffickers need protection; competing cartels effectively rule huge swaths of the country. 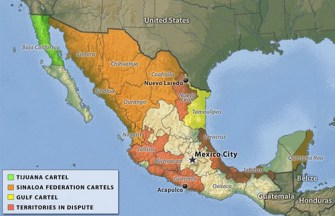 The common critique of this model is that making drugs more widely available might lead to a large increase in consumption—but Miron points to contradictory evidence from Europe: The Netherlands has a roughly legal regime for marijuana, yet their use rates are far below those in the U.S.: 4% of the population having used marijuana in the past month in the Netherlands, compared to 5.4% in the U.S. Portugal, meanwhile, has the most liberal drug policy in Europe, having decriminalized all drugs, not just marijuana, about ten years ago. “They did not observe any significant increase in use,” says Miron. In fact, a study published by Cato Institute suggests that illegal drug use among teens and the incidence of new HIV infections among drug users both fell. Meanwhile the number of people seeking treatment nearly doubled.

Despite stringent drug policies, the U.S. has the highest levels of cocaine and marijuana use in the world. Approximately 16.2% of Americans have tried cocaine and 42.4% have used marijuana. Following Portugal’s example could lead to a decrease in these rates. Either way it would also allow greater access to treatment and would deal a serious blow to the Mexcian drug cartels that supply America’s drug habit. There have been over 28,000 drug-related murders in Mexico alone since President Felipe Calderon’s crackdown on drug smuggling began in December 2006.

“Legalized access to drugs would increase drug-related suffering dramatically,” wrote John Walters, the U.S. drug czar from 2000-2009, in a Wall Street Journal op-ed last year. Walters argued that the violence along the Mexican border is “dwarfed” by the violence in our own communities caused by people under the influence of drugs. “Roughly 80% of child abuse and neglect cases are tied to the use and abuse of drugs.”

Walters also attacked the claim that greater availability doesn’t increase consumption. In the late 19th century when opiate- and cocaine-based remedies were widely available in the US without penalty, addiction was “rampant.” The same was true in China with opium, and the same is true now in Thailand, Malaysia, Iran, and Afghanistan, where heroin is easily accessible. The methamphetamine epidemic of the 90s and early 2000s was fueled by easy access to homemade meth, but when the U.S. cracked down on the drug several years ago, use and supply dropped sharply: by 60% or more between 2002 and 2008.

The war on drugs has had tangible success in recent years. “Half as many teens are using drugs than 30 years ago and a quarter fewer than seven years ago,” wrote Walters. Now is not the time to drop our guard.

—An NPR infographic about the Mexican drug cartels.

Philosophers have been making the claim that free will is an illusion for hundreds of years. Dr. Uri Maoz shares what modern neuroscience has to say about it.
▸
6 min
—
with
Dr. Uri Maoz
Up Next
Culture & Religion

Photographer Edward Burtynsky Chronicles the Erosion of the Natural World

Photographic artist Edward Burtynsky, who is particularly known for his sweeping images of desolate industrial landscapes and their implications for the ruin of the natural world, recognizes that there is […]