Six national mapping agencies have decided to integrate what3words into their products and services.

What3words is a location reference system requiring no more than three words to fix the location of any place on Earth. It is not only simple, but also superior to regular postal addresses, which don’t work ‘off the grid’.

Since its inception, what3words has been put to a varied range of uses. Its integration into national mapping services is an important accolade, indicating official acceptance, wide applicability and a high degree of reliability. The six countries involved are: France, Poland, Norway, Switzerland, Suriname and Mali.

This blog zoomed in on what3words in January of this year. Here again is the Strange Maps take on this strange mapping system.

Johnny: “No Miss, I thought he lived in Washington!”

That corniest of jokes is close to getting a whole new punchline. Of no more than three words. For the address of the Address might very well be: confronting.general.encryption.

Confused? We thought so. Let’s back that up a little. Enter what3words, a London-based startup that’s doing for geolocation what domain names did for IP addresses: replacing unwieldy data strings with easily remembered word combinations.

The company has developed an algorithm that ascribes a unique, three-word address to each of the 57 trillion three-by-three-metre squares that make up the surface of the whole world. Meaning that anywhere on Earth — like that plot of land in Gettysburg, to which we will return — now has a short, singular and specific address.

The idea was born out of frustration. Chris Sheldrick, CEO and co-founder of what3words, accumulated plenty of experience with the inadequacy of the usual geolocation codes in his previous job as band manager.

UK postcodes are among the most specific in the world, pinpointing a clump of houses and sometimes even a single, bigger structure (see also #113). But if you’re looking for the right loading bay at a huge, sprawling venue like the NEC in Birmingham, even its specific postcode (B40 1NT) won’t be a great help. So how about giving your crew 20-digit GPS co-ordinates? Can’t get more specific than that. But Sheldrick remembers one driver who inverted two numbers and ended up 50 miles from his intended location.

Another experience from the music scene set Sheldrick on the path to the solution. Apparently, at the annual Glastonbury Festival, it is customary to use three-word addresses to locate specific tents in the giant, uncharted camping area. An evening at the flat of a mathematician friend delivered the idea of the algorithm, and the three-by-three-metre squares.

But what3words does a lot more than connect roadies with venues, and music fans with tents. In fact, the application’s potential is huge. According to the company, as many as 4 billion people in the world lack a formal address, thus restricting their access to government services and payments. Having a precise address could also help these people register with a doctor, open a bank account, and, of course, receive postal deliveries. The incentive for governments is clear: the more citizens have a proper address, the more citizens they can properly tax. 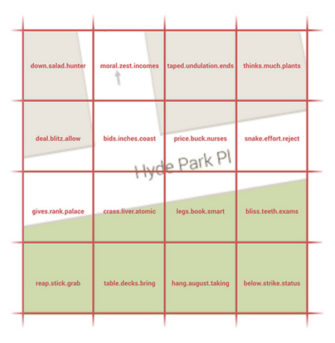 What3words is available online, but also works offline as a smartphone app. It is currently available in English and eight other languages (French, Spanish, Portuguese, Swahili, Russian, German, Turkish, and Swedish). Each of those languages uses between 25,000 and 40,000 words to generate the addresses. Offensive words and homophones have been excluded, and shorter, easier words are used to describe populated areas.

The what3words app is already being used widely, for example by NGOs in Tanzania, to map and combat outbreaks of cholera. Several African governments are weighing the benefits of worded geolocation.

Last year, what3words won the Innovation Grand Prix at the Cannes Lions International Festival of Creativity. The company has raised millions of dollars in venture capital from several sources, including from Force Over Mass Capital, a company co-founded by Theo Osborne, the brother of George Osborne, the UK’s Chancellor of the Exchequer (equivalent to a Minister of Finance elsewhere).

Those investors are acutely aware that worded geolocation could profoundly transform the delivery of goods and services worldwide, taking the interconnectivity of our planet to the next level. But what3words is also a lot of fun. Its website allows you to roam the Earth, browse the trillions of randomly generated geo-names for those with a weirdly poetic ring worthy of a Robert Pollard song title (1).

Despite their randomness, some addresses seem strangely appropriate for the place they designate. Some examples: 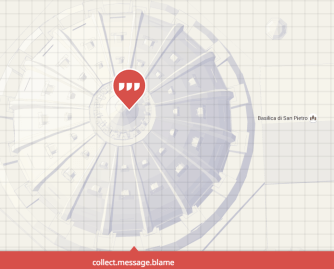 The cupola of St Peter’s basilica in Vatican City is located at collect.message.blame. Catholic guilt, anyone? On the steps of the basilica: embedded.eagle.bonus. Obviously referring back to the Church’s imperial Roman legacy. Inside, left of the aisle: thinkers.orbit.protests. If that isn’t an echo of the Galilei controversy!

Could these two addresses, found within the mausoleum of Mao Zedong (2), both be oblique references to the Great Helmsman’s place in Chinese history: kingpin.launched.rips and rebirth.lines.tweaked.

The location of Adolf Hitler’s Führerbunker in Berlin is a bit difficult to ascertain; but could it have been beneath the coordinates that read history.final.girder?

And here’s the address for Manneken Pis, the statue of a urinating boy that serves as the unofficial mascot for Brussels: short.taken.informal. Very informal; and upon closer inspection: quite short indeed. A bit further, the inside of the European Parliament, another telling address: popular.vocal.fees. Yes, those MEPs make too much money! 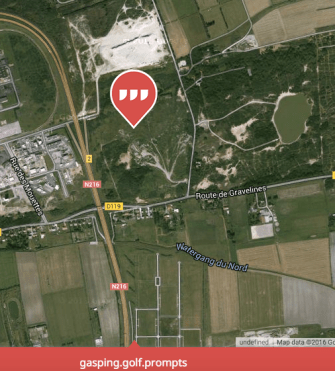 For just one example of how stunningly simple and helpful the app can be, let’s go to Calais. In that French port town, thousands of refugees have gathered in shantytowns in the hope of making the crossing to England. The biggest of these is nicknamed The Jungle, but you won’t find it on any maps. Few news articles describing it provide useful directions. Go to the map on the what3word website, type in gasping.golf.prompts, and it will take you straight to the entry to the unmarked field that now houses hundreds of freezing refugees.

Another example. Cape Farewell is the most commonly accepted southern extremity of Greenland. But it turns out that that’s just lazy geography. There is a small island three kilometres south of the Cape that constitutes the southernmost point of dry land under Greenlandic sovereignty. Since the island apparently has no name, let’s henceforth refer to it by the three-word geoname for its southernmost point. Welcome to the world, Appalled Folksinger Seamstress Island! 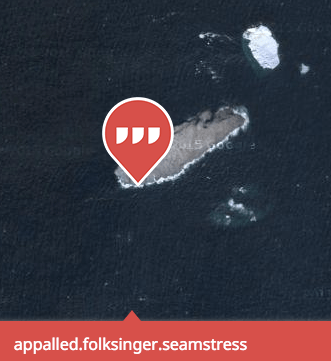 Let’s return to the Gettysburg Address. That term refers to Lincoln’s most famous speech, the one which he addressed to the crowd at the official dedication of the Soldiers National Cemetery in Gettysburg. This took place on 19 November, 1863, a few months after a battle that proved to be the turning point of the American Civil War, as well as its deadliest engagement (more than 7,800 killed, more than 17,000 wounded).

The previous speaker had held forth for two hours. But the Gettysburg Address itself is short. Counting less than 300 words, Lincoln pronounced it in about two minutes. He finished before photographers could ready their equipment and take his picture. In his brevity, Lincoln captured the essence of the cause for which the United States fought. The Gettysburg Address is a miniature jewel of political rhetoric. It is therefore rather strange that the Address does not have a fixed address. There is no unanimity on the place where Lincoln stood as he gave his speech.

The Soldiers National Cemetery is graced by the Lincoln Address Memorial, one of the world’s few monuments, if not the only one, dedicated to a speech instead of its orator. Its what3words address is smudges.innovators.country. But this is not where Lincoln spoke. A plaque near the Memorial says that the Address was delivered about 300 yards from this spot along the upper cemetery drive, but doesn’t go into specifics.

Over the years since 1863, several sites have been proposed as the location of the speaker’s stand on which Lincoln proclaimed the Address. One of the earliest theories is that of Colonel W. Yates Selleck, who pointed to a spot “350 feet almost due north of Soldiers’ National Monument” (eerily, located at bothered.vanquished.friendships). 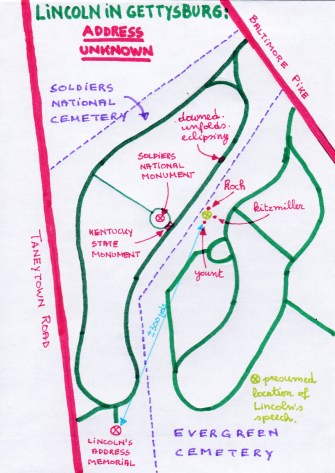 The so-called “traditional site” is at that Monument itself; but research of the available sources, including an analysis of the photographs taken before and/or after Lincoln’s speech, refutes that long-standing tradition. Various theories place the speech at five different locations. The most recent theory, formulated in 1995 by former military intelligence analyst William A. Frassanito, locates the speaker’s stand on the site of three later graves: those of Israel Yount (d. 1892), John Koch (d. 1913), and George E. Kitzmiller (d. 1874).

Entering the GPS coordinates provided for these three graves (39°49.180′N 77°13.845′W, 39°49.184′N 77°13.847′W, and 39°49.182′N 77°13.841′W) into Google Maps indeed provides locations that match the photographic record, of three graves on the Evergreen side, backing up against the fence that separates it from Soldiers National Cemetery, with the Soldiers National Monument visible to the left, and the Kentucky State Monument in between. 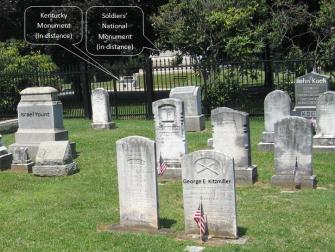 But entering these coordinates into the what3words app lands you on downed.unfolds.eclipsing. Not only is that on the other side of the fence, in Soldiers Military Cemetery, but it’s also in the middle of the cemetery driveway, nowhere near the gravestones mentioned (and geolocated) by Frassanito. So where exactly is the what3word address for Lincoln’s Gettysburg Address? As mentioned, confronted.general.encryption is an option (doesn’t it sound well-chosen too, now?) But so is adventurer.cockpit.clustered. Or handbags.trash.consumption.

Fact is, until the discrepancy between the data generated by what3words and Google Maps is resolved, we’re just guessing. If and when we find it, could we just for once renege on randomness and rename this plot of land fourscore.seven.years?

More on the what3words method and its applications here. Which is also where you’ll find the map that allows you to explore the world of named geolocation.Images of the named grid, of the Jungle in Calais and of the southernmost point of Greenland generated by the map on what3words. Hand-drawn map of the cemeteries by yours truly. Image of the Yount, Koch and Kitzmiller graves by Donaldecoho, found on Wikimedia Commons.

Confronting the logic of the “I have nothing to hide” argument.