After Brexit, here’s more evidence that Europe is crumbling: Catalonia’s parliament just voted to go ahead with plans for what it calls a “unilateral disconnection” from Spain – a euphemism for breaking up on a par with “conscious uncoupling”.

Spain’s constitutional court swiftly and unanimously declared the vote illegal. And the Spanish government said it may sue Carme Forcadell, the speaker of the Catalan parliament, for letting the vote go ahead at all. So Madrid won’t let Barcelona go without a fight – at least not a legal fight.

Next red letter day in Catalonia’s long, slow march towards independence is 28 September, when the Catalan parliament will hold a confidence vote that, in the words of Catalonia’s pro-separatist president Carles Puigdemont, could bring the country to “the gates of independence”. That option is currently favoured by 47.7% of Catalan voters, according to the latest poll.

But whether or not Catalonia marches through those gates, in a literal sense it can never get rid of Spain: the very outline of the Spanish state is tattooed on Catalonia’s street grid – an indelible reminder of the bonds of history and geography. 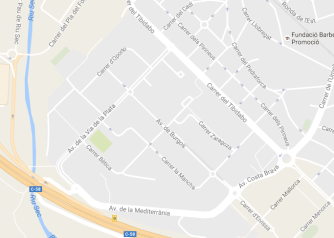 To find this Spain-in-Catalonia, zoom in on Badia del Vallès, a municipality of some 14,000 inhabitants half an hour’s drive northwest from Barcelona. Badia is a new town, planned in the 1960s to house thousands of migrant labourers drawn from elsewhere in Spain to the bright lights of Barcelona.

Back then, Spain was still languishing under the dictatorship of Francisco Franco, and very much a unitary state. Talk of autonomy for Catalonia, the Basque country and/or any other of Spain’s regions was tantamount to treason.

Work on Badia started in 1970 and was completed three years later. The town was officially inaugurated in 1975 by Juan Carlos, then still Prince of Asturias. A few years later, as king, Juan Carlos would help guide his country from autocracy to democracy – a course that would eventually also grant more powers to Spain’s regions. 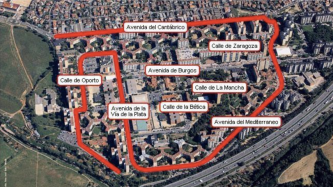 In 1994, Badia del Vallès was incorporated and became an independent municipality. In recognition of that fact that many of the town’s inhabitants came to Badia from other parts of the Iberian peninsula, the municipal flag shows a swallow, the migratory bird par excellence. Another symbol of migration – or, more precisely, of the unitary state that Spain still was in the mid-1970s – can be found in the of the streets in the new town. The grid is laid out to resemble the shape of the Iberian peninsula, with street names to match.

On Google Maps, the shape is a bit tricky to pick up; but rotate the map a bit to the left, as shown on this map published by Madrid’s ABC newspaper, and the streets and avenues align with the shores and borders of the peninsula.

The Avenida del Mediterraneo mirrors the shape of the peninsula’s eastern coastline, the Avenida del Cantabrico (1) is named after Cantabria, on the northern coast. The ‘map’ also includes Portugal, and name-checks, location-appropriately, a Calle de Oporto and a Calle del Algarve. 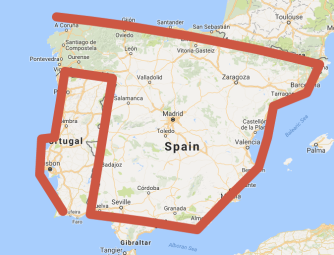 Back in ‘Spain’, the Calle de la Bética recalls the Roman province of Baetica in southern Spain. Slightly higher up is the Calle de La Mancha, named after the region otherwise famous for its windmill-chasing knight-errant, Don Quixote. The Avenida de Burgos and the Calle de Zaragoza are named after the eponymous cities.

The main artery, on both the ABC and Google maps, is the Avenida de la Via de la Plata, which translates, in an apparent pleonasm, as the ‘Avenue of the Silver Way’. In fact, the Via de la Plata is an age-old route of pilgrimage and trade that traverses western Spain from north to south. ‘Silver Way’ is actually a misnomer: the name derives from the Arabic balat, which refers to the cobbled road engineered by the Romans, who called it Via Delapidata (‘Paved Stone Road’). The road actually predates the Romans, and is thought to find its origin in the prehistoric tin trade.

Badia’s picture of Spain isn’t the only cartographic Gestalt hiding in plain sight, a map in the map. This blog previously discussed a Nebraska-shaped field in Nebraska (#426) and a Danish tourist attraction in the shape of a world map (#727). Not modelled on a map, but conceptually very close to Badia, is Ciudad Evita, the suburb of Buenos Aires modelled after the profile of Evita Peron (#346).

Many thanks to Jaime Bonet Navarro for sending in the map of Spain-in-Catalonia, found here on the ABC website.

(1) On Google Maps, which uses the Catalan-language equivalents of the street names cited here in Spanish, the Carrer del Tibidabo replaces the Avinguda del Cantabric, a name now given to a smaller street connecting the former to the Avinguda Costa Brava.

Carl Jung was one such person.
Up Next
The Future

10 of Nikola Tesla’s Most Amazing Predictions

Many predictions by Nikola Tesla, one of the world’s most celebrated inventors, have already come true and some might in the near future.