The European Union finds itself trapped in a reality not unlike the Invasion of the Body Snatchers. Former friends are turning into mortal enemies at a frightening rate.

In fact, the EU is stuck between a rock and a hard place: Russia actively seeks to destabilize the Union from the east, and from the other side of the Atlantic, the Trump administration seems keen to do the same. Ted Malloch, president Trump’s pick as U.S. ambassador to the EU (1), has compared the European project to the USSR – and expressed a desire to see it end in a similar way:

“I had in a previous career a diplomatic post where I helped bring down the Soviet Union. So maybe there’s another union that needs a little taming”.

And then there is the UK, which has decided to leave the Union. Some hope (and others fear) that its ‘Brexit’ is the first of several member state exits from the EU – thus potentially precipitating the end of the Union.

Such a scenario would have sounded impossible just over a year ago (i.e. before the British referendum on Brexit). But perhaps the EU should get ready for some worst-case scenarios. What will come after Brexit? Here is a map of portmanteau descriptions for other member states leaving the Union – some funnier than others. 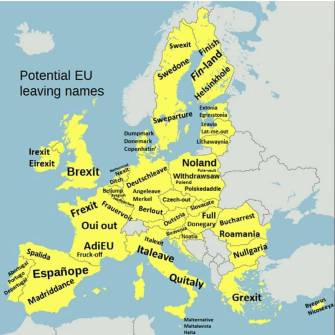 (1) News of Mr. Malloch’s candidacy for the job caused strong disapproval from EU officials. He was not appointed, and the position of U.S. Ambassador to the EU remains vacant (as of October 26, 2017) since the resignation of Anthony L. Gardner on January 17, 2017.

Tags
brexitEUEuropeexitfunny namesleaving namespoliticspopulismstrange mapsUK
In this article
brexitEUEuropeexitfunny namesleaving namespoliticspopulismstrange mapsUK
Related
Putin’s war: “The single biggest geopolitical mistake since 1989”
“This is much deeper than just ‘let’s figure out how we can get both sides to get along.’”
▸
15 min
—
with
Ian Bremmer
How resisting conformity can lead to real world progress
Thinking as a group and going along with the loudest voices can feel easy and even natural. But to make real positive change in our world, it’s important to hear all voices and question the perceived majority.
▸
5 min
—
with
Todd Rose
10% of people are dominating social media. What if the other 90% spoke up?
Social media isn’t the majority – it’s the vocal fringe.
▸
with
Todd Rose
The Big Think Interview
Why the world needs cults
Scientology, QAnon, and Heaven’s Gate: why do we seek healing from cults?
▸
with
Jamie Wheal
The Present
Not just COVID: mortality rates are up from homicides, drug overdoses, accidents
Some of these trends may be due, in part, to the lockdown.
Up Next
The Present
How a 3-Day Weekend Can Curb Climate Change
Universal Basic Income (UBI) and the movement towards a shorter work week is not just a solution to inequality, but one also aimed at stabilizing the environment.