Which Countries Have the Best Passports — And Which Have the Worst

Passport specifications are regulated by the International Civil Aviation Organisation (ICAO), the relative power of your country's passport says a lot about its standing in thew world. 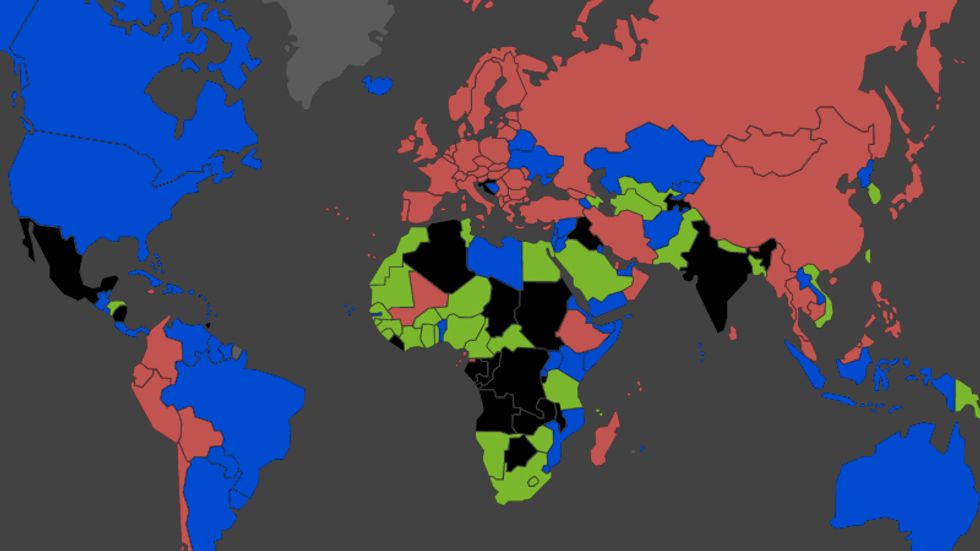 Sweden and Germany have the world's most useful passports. If your government-issued travel document says Sverige or Deutschland on the front cover, you have visa-free access to 157 countries across the globe. That's more than the holders of any other passport.

The Afghans are on the other end of the scale. Their passport only grants them visa-free access to 24 countries. No nationals are less welcome abroad, although the Pakistani are almost as unpopular: they only get visa-free access to 27 countries – less even than Iraq or Somalia (30 and 32 visa-free destinations, respectively).

Passport power is a rough compound of your country's wealth and peace. The higher it scores on either index, the more welcome you'll be around the world. But if your visit is statistically more likely to add to a country's poverty or turmoil, the less likely it is that your passport alone will get you in.

Burgundy is the main colour among European passports.

But Swedes and Germans (and many other nationalities with powerful passports) also need visas for Saudi Arabia, Russia, India, Cuba, China, Belarus, both Congos and even the puny, Pacific atoll of Nauru. Among quite a few others. Being top of the heap list doesn't mean you get to walk into anywhere just for free. Still, most of the world is your oyster.

That oyster is shut tight if you're a Kabuli planning a get-away-from-it-all holiday. Only three countries grant genuine visa-free entry to Afghan nationals: Haiti and St. Vincent and the Grenadines in the Caribbean, and Micronesia in the Pacific. Question to any readers over there: see many Afghan holidaymakers?

A further 21 countries are satisfied to furnish Afghan visitors with a visa on arrival (and for a fee, of course). These include Bangladesh and Burundi, Madagascar and the Maldives, Togo and Tuvalu.

Where is America on the powerful-passport scale? Quite high up – in fourth place, granting access to 154 nations. As do the passports of Singapore, Luxembourg, Austria and Portugal. Doing one better are South Korea, Denmark, Norway, the Netherlands and Belgium, with 155 visa-free destinations. Six countries rank second after Sweden and Germany, with 156 visa-free countries: France, the UK, Italy, Spain, Switzerland and Finland.

With a Japanese passport, you don't need a visa for China, Laos or Vietnam, Bolivia, Paraguay and a few other destinations. With an American one, you do. Inversely, Japanese visitors need a visa for Armenia, Canada, Equatorial Guinea and some others, whereas American passport holders don't.

For the full ranking, and to see which countries you need a visa for, visit Passport Index.

That website includes a few intriguing graphics. One page shows the cover of all the world's passports, in what seems to be a riot of colour. In fact, passports come in many hues of only four basic colours: red and blue, green and black. Isolate 'Europe' in the drop-down menu, and the palette narrows to burgundy, mainly. Choose 'North America', and you're faced with twenty shades of blue.

What, if any, is the system behind the geographic distribution of passport colours?

Passport specifications are regulated by the International Civil Aviation Organisation (ICAO), but colours are not part of the requirements listed in Document 9303. Countries are completely free to choose, but that choice is often determined by the regional club to which they belong – or want to belong.

Elsewhere on the Passport Index website, a world map provides an overview. Eliminating the hues to focus on the four main colours, the map looks like a game of Risk in full progress: some clustering ongoing, but still plenty of random variation.

Europe is red, but not entirely. Four countries prefer blue: Ukraine and Belarus, Bosnia and Iceland. Croatia is the even odder one out, preferring black. If we return to the passport picture overview for Europe, we see that Europe's red is mainly burgundy-tinted, as required by the European Union.

In 1981, “anxious to promote any measures which might strengthen the feeling among nationals of the Member States that they belong to the same Community," representatives of the member states of the European Communities – a precursor to the EU – resolved that their passports should have a similar design, including a burgundy cover.

If you're Boris Johnson (1), that probably adds to the evidence that the European project is a thinly veiled fascist superstate. Having decided to leave the European Union, Britain can finally cast off this burgundy straitjacket, among many other continental impositions.

Croatia, the EU's newest member state, will have to change its passport cover to burgundy next time it updates their design. Turkey, in wishful mimicry, imitates the EU's burgundy on its passports, in anticipation of one day joining the European club - although that ambition seems to have been put on the back-burner by both Turkish president Erdogan and the EU itself. Switzerland, on the other hand, distinguishes itself from Europe's subdued burgundy by adopting the bright red of its national flag.

Europe's red spills over into Asia via Turkey and Russia, all the way to Iran and Oman, and China and Japan – although the further east one gets, that is less likely to reflect any ambition to join the European Union, and more an indication of conformity to what is the world's most popular passport colour.

Blue, on the other hand, is the most popular colour in the Americas, all the way from Canada, via the U.S. and Brazil, down to Argentina. The laissez-passer for the U.S. has been navy blue since its bicentennial year, 1976, when the colour was chosen to match a shade in the American flag. Before that, U.S. passports were green (2).

Black is also the colour for Mexico, Nicaragua and Trinidad and Tobago. Nevertheless, blue is the colour for the other members of the 15-nation Caribbean Community (Caricom). It would seem that Mercosur, the South American economic association comprising Brazil, Argentina, Paraguay, Uruguay and Venezuela, follows the same rule. Blue, some say, symbolises the New World, perhaps because old-worlders needed to cross an ocean to discover, colonise and populate it.

Mercosur's South American rival, the Andean Community, appears to prescribe red for its four member countries, which would explain why Colombia, Ecuador, Peru and Bolivia's passports are in that colour – as well as those of Chile, a former Andean Community member. Jamaica also sports a red passport. Honduras is America's sole green spot.

Green is most popular in Africa, where one imagines it symbolises either the continent's verdant lushness, or the Islamic religion. The latter would explain why green spills over into southwest Asia (Saudi Arabia, Pakistan, Bangladesh, some of the 'stans). There is also a more prosaic reason for green's preponderance in Africa: it is the preferred colour for most (but not all) member states of Ecowas, the Economic Community of West African States.

Black is also most prevalent in Africa, from Algeria via Sudan and Congo to Botswana. The few non-African black passports, besides Croatia, are Iraq, Kyrgyzstan, India and New Zealand (doubtlessly a nod to the country's treasured All Blacks rugby team).

Does the world map of passport colours tend towards order or chaos? If the former, then perhaps one day all the passports in the Americas will be blue, all European ones red, all Islamic ones green, allsubsaharan African ones black. And all others the colour of the region they would most like to adhere to. But perhaps the latter is more preferable. The passport club could certainy use a few extra colours. How about a passport in bastard-amber, gingerline, drunk tank pink or banan?

“Black passports (or 'black books' to use the jargon of the well-traveled government employee) are reserved to diplomatic personnel: if you ever read or hear of an American "traveling on a diplomatic passport," you may rest assured that the color of their passport is black. These carry the imprint 'Diplomatic Passport'”.

“Next down in the hierarchy are 'red books'. These are U.S.-government ("For Official Use Only") passports that are issued to civil servants who are not diplomatic personnel. Red books are marked 'Official Passport'”.

“Finally, there are ordinary passports, blue since the Bicentennial and green prior to the changeover”.