Iceberg A-68 is slowly drifting towards the open sea. Dubbed the ‘monster berg’, A-68 broke off from the Larsen C ice shelf on the Antarctic peninsula in July 2017, reducing its size by about 12%. Recent satellite images show the gap between the new iceberg and the remaining ice shelf is widening.

At present (i.e. mid-November 2017), it is still lingering close to the ice shelf from which it calved. Eventually, it will most likely drift north through the Weddell Sea into the Atlantic, towards South Georgia and the South Sandwich Islands. In months (or years) to come, it may prove an obstacle to shipping – even after it inevitably breaks up into smaller parts.

A-68 is not the first massive iceberg to calve from the region. In January 1995, a large part of the Larsen A ice shelf collapsed, and in March 2002, the same happened at Larsen B. The events have been linked to warmer temperatures in the region.

Huge, unfamiliar objects like A-68 need some context for us to understand their true size. Enter… Wales. “The size of Wales” is a recurrent measure of geographic size in news reports, often used to give an idea of the area of rainforest destroyed, for example (2). As shown on this map, the world’s largest iceberg du jour is about a quarter the size of the British principality. 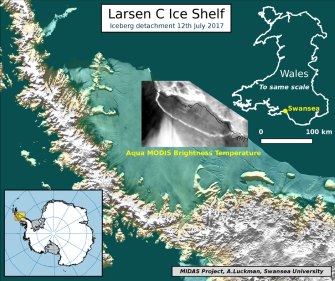 But Wales was just the beginning of it. Since the interest in A-68 was global, a curious phenomenon occurred: the iceberg was compared to areas from around the world, providing an insight into the relative sizes of some of the world’s more notable geographies.

Depending on your local news outlet, A-68 is the size of Delaware, seven times New York City, four times Greater London, twice the size of Luxembourg, twice the volume of Lake Erie, and long enough to cover the distance between the Australian cities of Newcastle and Wollongong. 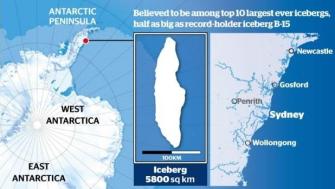 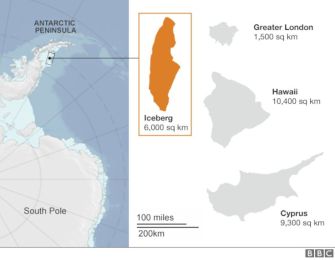 USA Today even produced a slide show, comparing the iceberg to a number of famous, smaller landmarks. Put next to each other, the slides give insight into the relative sizes of Los Angeles (close to seven and a half times Washington DC), the Grand Canyon (roughly twice the size of Luxembourg) and the Great Salt Lake (bigger than Long Island), among others. 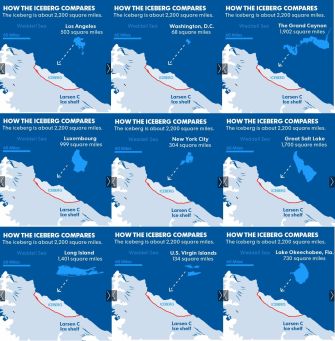 Climate Central has performed a similar exercise, but chose to roll up the iceberg – all 277 cubic miles of it – into a giant iceball, plonking it down on various areas of the U.S., where it towers menacingly like an alien craft come to destroy the earth. See the eight-mile-wide globe of frozen terror crush Manhattan, Miami, Chicago, Denver and San Francisco – while neither Mount Rainier nor the Grand Canyon manage to reduce the menace of its size. 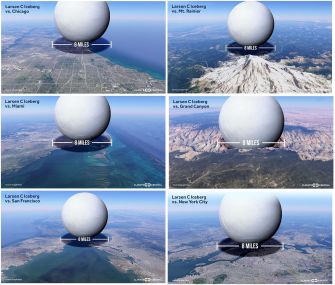 If you live in Canada – the second-largest country in the world – size comparisons such as these may appeal less to the imagination, which is why the National Post came up with a frame of reference that is easily understandable to anyone with a rudimentary grasp of Canadian geography: the iceberg is slightly larger than Canada’s smallest province: Prince Edward Island. To make the comparison even easier, P.E.I. is also floats in the ocean. 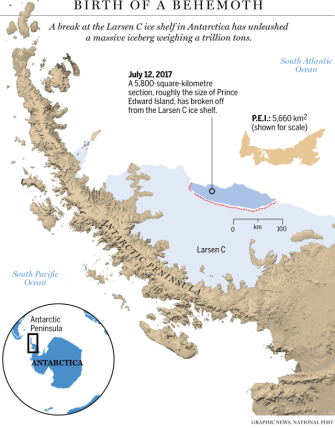 Bringing some much needed cartographic conformity to these various comparison maps, the German newspaper Berliner Morgenpost has produced an interactive tool that allows you to place an A-68-sized blot over any part of the world, showing you how much of your neck of the woods would be covered by the giant iceberg. 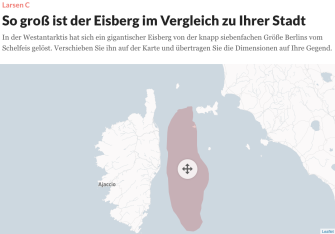 Let’s wish A-68 and this tool a long life: long enough to take over from Wales as the standard reference for geographic size. And perhaps one day soon, it will be areas of the rainforest the size of A-68 that will be lost forever, finally relieving Wales from the ecological shame-by-association.

(2) One charity is determined to turn this rather negative connotation on its head, and is raising funds to save an area of rainforest twice the size of Wales. Its name, of course: Size of Wales. Another frequently used measure is “the size of Belgium” – which, to be precise, is 1.47 times the size of Wales.

Universal basic income can secure basic independence for citizens, something which modern states have failed to do, argues author Louise Haagh.
Up Next
Starts With A Bang

Our most powerful telescopes can peer back into the ultra-distant Universe, but can only see the pristine clouds of gas if there’s a very, very distant light source beyond to […]