She may have shuffled off this mortal coil two years ago, but Margaret Thatcher’s spirit seemed alive and well in Britain last week.

In a shock election victory, her spiritual heir David Cameron won an outright majority in the House of Commons, allowing him to continue his prime-ministership sans coalition partner — those pesky Liberal Democrats were wiped out anyway.

The surprise over the Tory win was all the greater because it had been missed by every single opinion poll published in the run-up to last Thursday’s election. But there was one, rather oblique forewarning — spotted by Alex McLaughlan, a British Twitterer. 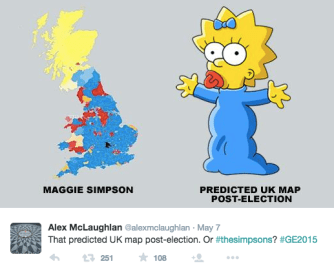 On polling day, he noticed a striking resemblance between a map of the predicted electoral outcome and Homer and Marge Simpson’s youngest… Maggie. Could that have been a sign from that other Maggie, calling in from the Great Beyond?

Once you’ve placed both images next to each other, you can’t un-see the similarities. The Scottish National Party won a landslide victory in Scotland, thus coloring the spiky top of Great Britain yellow. Most of England voted Conservative, hence that blue onesie beneath that yellow Scottish head. Labour held firm in its northern English heartlands, leading to that smattering of red, which could coagulate into Maggie’s trademark pacifier if your mind’s eye really wants to.

Cameron’s victory might prove bittersweet. Scots may have rejected independence in a referendum last year, the SNP’s massive victory will surely put the issue on the table again. At least in a political sense, the Scottish nationalist’s yellow clashes with the “true blue” of the Tories, whose full and official nomenclature is the Conservative and Unionist Party.

In one of those nice ironic twists that few of those involved seem to relish, you could say that the Tories are the SNP of the EU: clamoring for more power for Britain, or else they’re leaving the Union.

One of Cameron’s election promises was a referendum on UK membership of the European Union. After a renegotiation of Britain’s relationship with “Brussels,” he would offer the electorate a “simple in/out choice.”

Cameron, and much of the business establishment that supports him, is loath to cut economic ties with the continent, which would be very bad for British commercial interests. For its part, the EU is reluctant to give Britain the renegotiated settlement it demands, lest other member states get the same idea.

The result of a referendum following a botched renegotiation could be something few on either side of the English Channel really want: a so-called Brexit.

Will it ever come to that? Again the magic of anthropomorphic maps may provide an answer. For Europe, as discussed in #459, bears a more than passing resemblance to… Marge Simpson, Maggie’s mother. 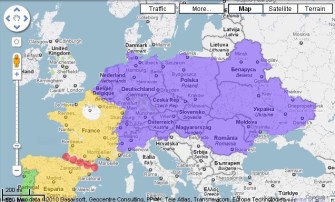 Many thanks to Jeremy Hoogmartens for sending in this map, found here on Alex McLaughlan’s Twitter feed.

Related
Starts With A Bang
The galaxy cluster that broke modified gravity
19 years ago, the Bullet Cluster provided an empirical proof for dark matter. Even today, modified gravity still can’t explain it.
Neuropsych
Psychology studies that go viral are likelier to be bogus
A new 20-year analysis of over 14,000 psychology studies finds that a study’s media coverage is negatively linked to its replicability.
The Future
How a device transmits radio waves with almost no power
Apart from the energy needed to flip the switch, no other energy is needed to transmit the information.
The Present
Radical idea: Redraw the U.S. map as a nation of city-states
While cities drive national economic growth, their political geography means they cannot effectively deal with inequality, poverty, and other socioeconomic problems.
The Learning Curve
Why do high IQ people stagnate in their careers? Emotional intelligence
Research suggests that emotional intelligence is more vital for success than IQ.
Up Next
Technology & Innovation
Ray Kurzweil: Can You Read 100 Million Web Pages in a Few Seconds? Your Robot Assistant Will.
Think not in terms of the bottom line, but the skyline.