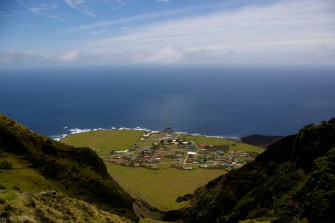 Bird’s eye view on Edinburgh of the Seven Seas, the capital of Tristan da Cunha.

As Darwin predicted, islands have more species. That’s because isolation can help preserve biodiversity. Could it be that place names also thrive on islands, and for the same reason?

Tristan da Cunha certainly seems to offer excellent support for that theory. Located roughly halfway between South Africa and Uruguay, the tiny, volcanic island is the most isolated inhabited place on the planet. It’s only reachable by ship, sailing about 10 times a year from Cape Town.

The British island in the South Atlantic also boasts some of the world’s weirdest toponyms. Since there are only about 250 Tristanites on the island, that means the island must have the highest weird-place-name-per-capita ratio in the world. 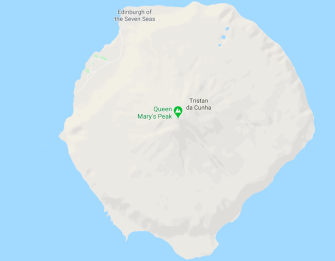 But it’s not easy to sample Tristan da Cunha’s toponymic delights, at least not on Google Maps. All you’ll find are a pin for Queen Mary’s Peak, the usually dormant volcano rising at the island’s center; and the label for the island’s capital, and indeed only settlement, delightfully named ‘Edinburgh of the Seven Seas’. (Although the locals just refer to it as ‘the settlement’).

Zooming in further will reveal two churches (St Mary’s, Anglican; and St Joseph’s, Catholic), one cemetery, one bar (The Albatross), one shop, and a small museum called the Thatched House. All of which is squeezed in between the harbor and a lava field, and connected by the island’s only road, somewhat ambitiously called the M1. No street view. No other place names.

I think we need to talk about Tristan da Cunha’s place names. pic.twitter.com/2H5PMmcZfc

Coming across a more detailed map of the island, British historian Dan Snow was taken aback by some of the local weirdness. He poured his findings into a Twitter thread titled We need to talk about Tristan da Cunha’s place names. Here’s what you won’t find on Google Maps. 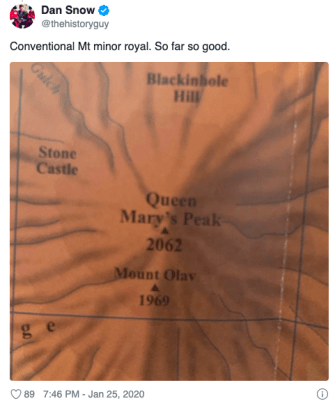 Mary and Olav, together forever on Tristan. 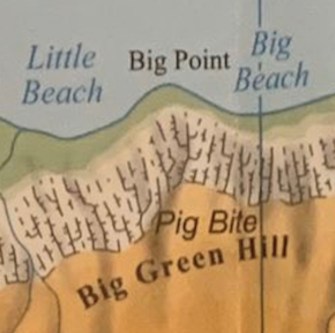 As remarkable as some toponyms on Tristan are, many others are remarkably ‘flat’ – merely descriptive, in the most generic way possible. Mr. Snow zooms in on Big Point, in between Little Beach and Big Beach, and shows Big Green Hill just to the south – although the place in between, Pig Bite, can’t but stimulate the reader’s curiosity. 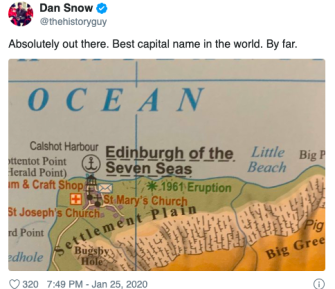 The island’s capital is its only settlement. Nothing much to do there. Pretty name, though.

Best capital name in the world

That would have been enough mappery for most, but Mr. Snow is reeled in by the settlement’s name. Best capital name in the world. By far, he proclaims. 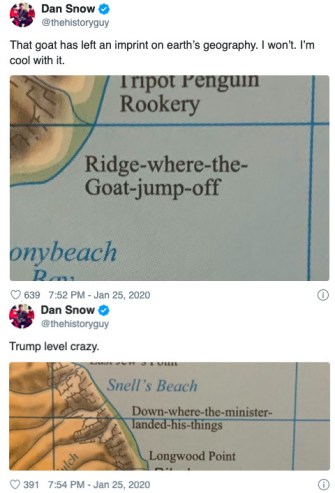 Looking further east, here are the two killer toponyms that cement Tristan’s reputation as the capital of weird place names:

These two ultra-descriptive place names are apparently used in full by the locals. They actually do roll off the tongue quite well.

So how, when and – most of all – why did those names come to be associated with places on Tristan? Incredibly, Mr. Snow’s thread elicited a response from the grandson of the man who surveyed those names. 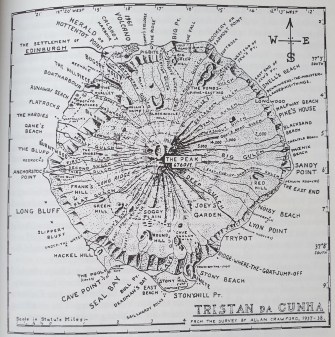 Caption for this map from Allan Crawford’s memoir: “Tristan da Cunha as surveyed by Allan Crawford in 1937-8. The place names were collected from islanders who helped with the survey; no deliberate names had ever been given to places; they were either natural descriptions such as Stony Beach, or they recalled events – Anchorstock was the spot where the wooden stock of an anchor was once washed ashore.”

Blame my grandfather for using the real, day-to-day names the islanders used when he mapped it, wrote Bryant Crawford. Mr. Crawford (Jr.) published a few excerpts from ‘North, South, East & West’, his grandad Allan B. Crawford’s memoirs, which reveal the special link between Tristan and Queen Mary, and why the heck the minister landed his things on that particular beach.

“When I landed on Tristan Island for the first time in 1937, as the Surveyor of the Norwegian Scientific Exhibition, I noticed that not many of the names on the Admiralty chart corresponded with the names used by the local islander population. It was at once evident that I should record the actual names used by the inhabitants for all topographical features in order to produce a meaningful chart.” 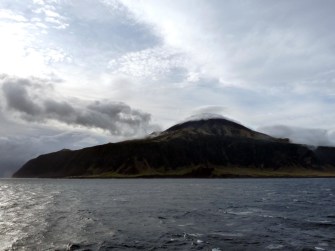 Tristan from the sea, with Queen Mary’s head in the clouds.

Loyal to the Royals

“I was impressed by the islanders’ loyalty towards the Royal Family, for many of the island cottages displayed their photographs, especially King George V and his consort. In fact, Queen Mary had taken a great interest in the islanders’ welfare and had presented the community with a harmonium for their Church.”

“In 1906, when Rev. and Mrs. Barrow arrived for a three-year chaplaincy, the weather was too rough to land at the Settlement, so they chose a beach landing in the lee. To this day, the beach is still known as ‘Down where the minister land his things’. It is because the name goes with a swing that it is still in general use.”

“There is already a Goat Ridge on the west side of the village, so a ridge on the south of the island is known as the ‘Ridge-where-the-goat-jump-off’, the sentence being used ungrammatically in full (they seldom used the past tense in speech).”

In all, Mr. Crawford noted down about 80 new toponyms for the island. A few (Hottentot Point, East Jew’s Point, West Jew’s Point) would today be considered insensitive – showing how much time has elapsed since the 1930s. 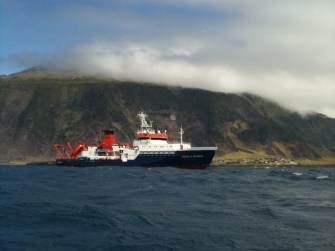 On and off the map

Some of Tristan’s other more notable place names: 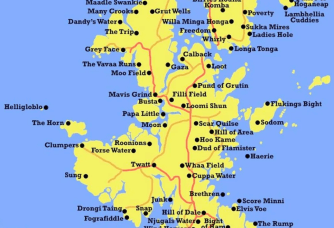 The Shetland and Orkney Islands also have their fair share of topographic weirdness.

It’s a long way to Fografiddle

But Tristan is not the only island with weird place names. A few years ago, Strange Maps zoomed in on the strange place names of Scotland’s Shetland and Orkney Islands.

On second thought, we may have overstepped the mark by handing the weird place name World Cup to Tristan da Cunha. Those two Scottish archipelagoes are quite far out too. But the same observation holds: strange place names seem to thrive in isolation. We’re lucky to have Mr. Crawford’s first-person account of their genesis on Tristan. How cool would it be to find a Viking scroll describing how the Orkney and Shetland Islands were named…

The forgotten voyagers of ancient Greece, China, and Scandinavia

Nicaragua is the most triangular country in the world

Underperforming, the U.S. comes in only 157th out of 196 in global triangularity ranking.
Hard Science

The Earth is not flat. Here’s how you can prove it.
Life

Researchers find a key clue to the evolution of bony fish and tetrapods.
Health

Start by reading the title, looking at the labels and checking the caption. If these are not available – be very wary.
Up Next
Starts With A Bang

Our Home Supercluster, Laniakea, Is Dissolving Before Our Eyes

This visualization of the Laniakea supercluster, which represents a collection of more than 100,000 estimated galaxies spanning a volume of over 100 million light-years, shows the distribution of dark matter […]