One of Maine’s nicknames is ‘the Switzerland of America’. That’s underselling the Pine Tree State: all the world seems to be hiding within its borders.

The poem on this postcard lists the many Maine localities named after foreign countries and cities.

All of which you could do, as the postcard affirms, without ever leaving the state of Maine. The poem, A Maine Travelogue, by Walter L. Colburn, is undated, as is the postcard. However, the card has a definite vintage feel. Perhaps it dates from the 1930s when Maine’s most famous signpost was erected.

The so-called ‘World Traveller Signpost’ in Lynchville points to a number of international-sounding destinations in the vicinity. Norway and Paris are both located within 15 miles; Denmark and Naples each just 23 miles to the right. China is a bit of a slog, though: almost 100 miles, double the distance to Peru. 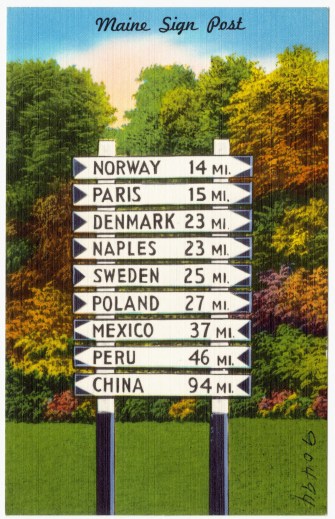 In its entry on the Lynchville signpost, Atlas Obscuraexplains why Maine has so many international-sounding place-names:

“In the late 1700s and early 1800s, notoriously independent Maine residents sought to honor peoples across the world fighting for independence. Denmark, Maine was named in solidarity with a British naval attack on Copenhagen in 1807. Mexico and Peru, Maine both got their names in celebration of those countries’ separations from Spain. An outlier is Norway, Maine, which was a clerical error: the town had been registered as either Norwich or Norage, but was mistakenly recorded by the provincial government of Massachusetts as Norway in 1797.”

Both the postcard and the signpost are incomplete. They miss out on at least two dozen Maine towns named after foreign cities and countries, including Belgrade, Bremen, Canton, Edinburg (sic), Lebanon, Moscow and Oxford.

And there’s more—much more: you can even travel our entire solar system along Route 1 in Maine (see #528 for more). 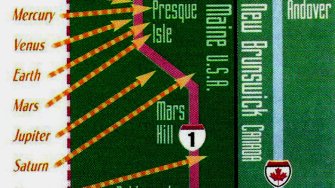 Related
The Present
How heat pumps of the 1800s are becoming the technology of the future
Innovative thinking has done away with problems that long dogged the electric devices — and both scientists and environmentalists are excited about the possibilities.
Starts With A Bang
JWST’s hunt for most distant galaxies gets double boost
Along with gravitational lensing and ALMA’s incredible long-wavelength spectroscopy, JWST is reshaping our view of the early Universe.
Thinking
Finding your essential self: the ancient philosophy of Zhuangzi explained
Adopting a healthy scepticism towards inherited ideas means “emptying the container of the Self.”
The Future
Startup’s bladeless flying car is designed to reach Mach 0.8
One of Jetoptera’s VTOLs is expected to reach speeds of around 614 mph, about as fast as a commercial jet airliner.
Health
New blood types are often discovered following medical disasters
New blood types are regularly discovered by an unusual absence or an unusual presence — both of which can result in tragedy.
Up Next
Surprising Science
Panamanian monkeys have begun to pick up stones, use them as tools, enter their own mini Stone Age
This is a remarkably rare case of non-human primate tool use in the wild. We’re witnessing another species dawn of their Stone Age.