This is a map of the online world. Each country is resized for the popularity of its domain name. Lots of weird stuff going on, but the eye is immediately drawn to the map’s greatest anomaly: Tokelau. That Pacific island nation is the online world’s only true superpower. It dwarfs every other country. The U.S. is a small backwater, outshone even by Canada. 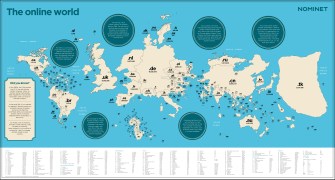 What a contrast: in the real world, where the U.S. still is the sort-of hegemon, Tokelau doesn’t even exist as a real country; it is a non-self-governing territory of New Zealand. And even if it were a real country, it wouldn’t be a very impressive one, or even very noticeable on an actual world map.

Tiny Tokelau consists of three atolls: Atafu, Nukunonu and Fakaofo. This map only shows the middle one (wrongly implying that it’s a ‘solid’ island, while in actual fact it is a classic atoll: solid edge, watery core).

Together, the three atolls measure no more than 4 sq. mi (10 km2) and have only around 1,500 inhabitants. Those numbers put Tokelau almost dead last in the world rankings for area and population (1).

The territory’s diminutive size has a few charming sides. Its capital rotates yearly between the three atolls. And as of 2012, Tokelau is run completely on solar power; the first country/territory in the world to be powered 100% by renewable energy.

But Tokelau is far from an island paradise. Its size, isolation and resource-poverty take their toll. There is no industry to speak of, and almost no space for agriculture. Tuna depletion has reduced the viability of subsistence fishing. So many Tokelauans leave to find jobs in New Zealand and Samoa that the population declines by almost 1% each year.

That’s is where this map comes in.

Tokelau at some point decided to monetise its .tk domain name, paradoxically by offering it to anyone for free. More than 31.3 million websites worldwide have been registered with the Tokelauan extension, almost as much as the combined registrations for the two runners-up, China (16.8 milion times .cn) and Germany (16 million times .de).

In a prescient example of the ‘freemium’ business model currently so popular online, only the usage rights are completely free for .tk-registered websites. Full ownership still requires a fee. Those fees represent about one-sixth of Tokelau’s annual income.

America’s dwarfism is as remarkable as Tokelau’s elephantiasis. There are just under 1.7 million websites registered with the extension .us, less than Colombia’s 2 million .co registrations or Spain’s 1.8 million .es registrations. This is largely due to the popularity in the U.S. of the .com extension, which is used for about 123 million domains worldwide. 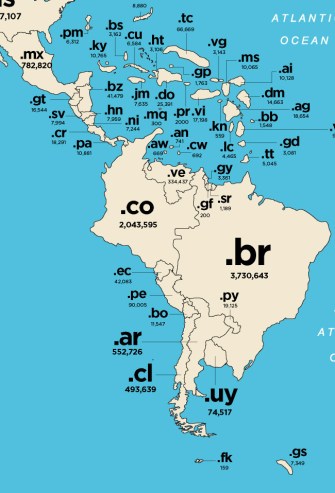 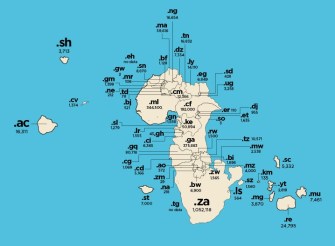 Only 15% of Africans are online, a fact which is reflected in the continent’s underrepresentation on this world map. South Africa (.za) is the only country with over a million registrations, but many other African nations don’t even make it to a thousand. There are just three internet domains ending in .so (for Somalia). Even Antarctica (.aq) has 75.

Europe is oversized, and dominated by Germany. The UK (.uk) is the fourth-biggest country in the world (10.6 million). A new .uk domain name is registered every 20 seconds. The 5.6 million registrations in the Netherlands (.nl) easily outclass those in bigger countries such as France (.fr, 2.9 million), Poland (.pl, 2.7 million) and Italy (.it, 2.9 million). Interestingly, Yugoslavia has a relatively healthy virtual afterlife (.yu, 32,000 registrations, double the number for Bosnia’s .ba). 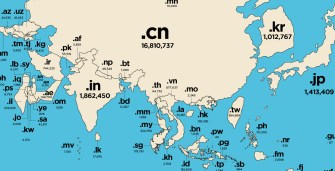 Israel (.il, 234,000) is the Middle East’s domain name superpower, but not by quite as much as you’d expect from such a fertile breeding ground for high-tech startups. Syria’s only 9 registrations (.sy) indicate that its people currently have other things on their mind than register internet domain names.

In Asia and Oceania, China 16.8 million outshine the other million-plus registration countries, Russia, India, Australia, Japan and South Korea (North Korea appears to be totally absent; didn’t they have some kind of internet there too?)

The French Southern Territories (.tf) have no permanent residents, but over 2,400 domain name registrations.

A few other Pacific island nations have a similar strategy as Tokelau, but nowhere near as successful. Tuvalu’s .tv extension has been registered over half a million times, Western Samoa’s .ws hits the 400,000 mark, and both Niue (.nu) and the Cocos (Keeling) Islands (.cc) punch way above their actual weight.

This world map would have looked quite different back in 2000, when there were only 400 million people online worldwide. That figure has increased eightfold over the past decade and a half, to over 3.2 billion at the end of 2015 – close to half the world’s population. It will drastically change over the next 15 years, when much of Africa and other as yet unserved regions of the world will go online. Will Tokelau still be the country domain name superpower then? Let’s see if the low-lying territory (highest point: 5 metres) survives the rising sea levels first.

Many thanks to Jan Quintiens, Pieter de Jong and Renke Brausse for suggesting this map, found here at Nominet, the official registry and directory for all .uk domain names.

(1) The Vatican is the only sovereign state that its both smaller (0.44 km2, 0.17 sq. mi) and less populous (around 850 inhabitants) than Tokelau. Monaco is five times smaller, but over 20 times more populous. The rest of the lists is made up almost entirely of obscure island dependencies, both for area (i.e. Clipperton Island (France), Gibraltar (UK), Ashmore and Cartier Islands (Australia), the Spratly Islands (disputed) and the Coral Sea Islands (Australia)) and for size (the Cocos (Keeling) Islands (Australia), the Southern and Antarctic Lands (France), Pitcairn Islands (UK) and South Georgia and the South Sandwich Islands (also UK)).

Proof the Supreme Court Isn’t All About Politics and Ideology

While the battle over the next Supreme Court justice will be fought in the realm of bare-knuckle, high-octane politics, the daily business of the justices is often a good deal less partisan.