At the end of this weird year, it will surprise nobody that the most googled person in America of 2016 was the president-elect, Donald Trump. But as this map confirms, the United States remain deeply divided, also in what each of them googled the most over the past twelve months.

The dying year was big on celebrity death, and no less than sixteen famous casualties to the Grim Reaper topped the lists in as many states. Big names like Prince, Muhammad Ali and Harper Lee in their home states of Minnesota, Kentucky and Alabama, respectively. Lesser luminaries like actress Florence Henderson, sports reporter Craig Sager and professional golfer Arnold Palmer also were the most searched terms in their home states of Indiana, Illinois and Pennsylvania.

Tennessee was enthralled by the death of Lawrence Tureaud, a.k.a. Mr. T: a celebrity death that turned out to be a hoax – and just one example of the fake news epidemic that gained prominence over the course of the past year (1).

Compared to the attention paid to dead celebrities, the U.S. presidential election garnered a lot less limelight. Donald Trump topped the Google search list in New Jersey, while Idaho asked itself: How did Trump win? The top searches in Connecticut and Georgia provide the answer – at least if we are to believe Hillary Clinton herself: (New) Comey Letter, referring to the FBI director’s message apparently reopening the investigation into the Democratic candidate’s emails, days before the election. 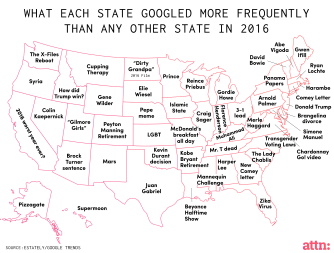 Reince Priebus, chairman of the Republican National Committee, topped the searches in his home state of Wisconsin. Iowa looked in to the Pepe meme – a cartoon frog that morphed into an alt-right icon during the election. Alaska was most puzzled by Pizzagate, a fake news story linking top Democrats, a DC area pizzeria and human trafficking.

The hot-button issue of transgender voting laws in North Carolina was mirrored by an interest in LGBT affairs in Kansas, in both cases the searches reflected political initiatives inimical to the extension of equality laws.

Foreign news – i.e. subjects covering the 95% of the world that is not American – made it to the top only in Oregon (Syria) and Iowa (Islamic State). The Panama Papers, which revealed money stashed away in foreign accounts, were both an American and a global phenomenon – and the top search in New York state.

So, considering that death, politics and war occupied 27 out of 50 states, did the other half have more cheerful queries? Yes, up to a point.

Entertainment topped the list in six states, with North Dakota looking for Dirty Grandpa, a buddy comedy movie starring Robert DeNiro and Zac Efron as his grandson. Washington state was curious about the X-Files reboot, while Utah was more partial to the Gilmore Girls revival on Netflix. Louisiana wanted to know more about the Beyoncé halftime show at the Super Bowl, with Texas supposedly more interested in the contribution by Bruno Mars – or is that, for some reason, the planet Mars? Delaware couldn’t get over the Brangelina divorce.

Seven states had sports on top of mind, with Nevada googling Colin Kaepernick, Colorado searching for Peyton Manning, Oklahoma zooming in on Kevin Durant, Arkansas typing in Kobe Bryant, Maryland focusing on Simone Manuel and Massachusetts looking up Ryan Lochte. To be fair, in most of those cases, the athletic achievements may not be what got each of these their attention. Unlike in the case of Ohio’s top search, 3-1 lead, which refers to the NBA’s Golden State Warriors, who lost the 2016 NBA Finals to the Cleveland Cavaliers after having winning the first three of seven games against the Ohio team.

Montana wanted to know more about cupping therapy, a form of alternative medicine characterized by many as pseudoscience. And Virginia was transfixed by the Chardonnay Go video, a viral reply to the Pokemon Go hype. Arizona googled the sentencing in the Brock Turner rape case over in California. Floridians were worried about the spread of the zika virus, while Alabamans were fixated on the mannequin challenge – no doubt because a video of inmates from an Alabama prison rising to the challenge went viral.

Hawaii was keen on the supermoon, or to use the correct term, the perigee-syzygy of the Earth–Moon–Sun system, which occurred in mid-November. For our money, the only state exhibiting the carefree banality one would have liked to associate with the good times we patently haven’t been experiencing this past year, is Missouri, which showed an overwhelming interest in the expansion of McDonald’s all-day breakfast. More par for the course of the annus horribilis that was the year that was, is California, the source of most of the popular vote lead that Hillary Clinton turned out to hold over electoral-college winner Donald Trump: 2016 worst year ever? To paraphrase Homer Simpson: No, California, the worst year so far.

As for Google Autocomplete, at least in this neck of the woods, the phrase 2017 will be… is autocompleted with: … my year and … better. That will depend on more than Google, though. See you on the other side!

Many thanks to Jeremy Hoogmartens for sending in this map, found here at Stumbleupon, and here in the original context, with more data on each state’s favourite entries.

(1) Fake news is not new, of course. Remember Abraham Lincoln’s warning from the past: “Don’t believe everything you read on the internet just because there’s a picture with a quote next to it”.

Related
Hard Science
Some earthquakes last for seconds, others for minutes — and a few for decades
What do you call it when the Earth shakes for three decades?
Sponsored
What childhood “money story” is shaping your financial behaviors?
Here are the signs that you inherited “money anxiety” from your parents.
The Present
The “maritime Indiana Jones” who salvages shipwrecks now wants to tow icebergs
Simple physics makes hauling vast ice chunks thousands of miles fiendishly difficult — but not impossible.
Neuropsych
Inside the brains of aging dogs
In a citizen science project, thousands of pet dogs are helping scientists to understand what happens to memory and cognition in old age.
Neuropsych
The most common source of awe might surprise you
It’s us.
Up Next
Politics & Current Affairs
Caribbean Nations Seek Reparations for Slavery and Native Genocide
One-fifth to one-sixth of British Victorian fortunes were derived from slavery, historians say.