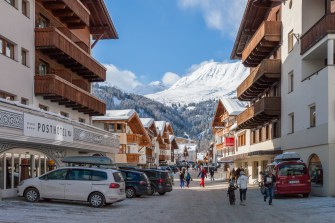 The weather’s good for skiing today in Serfaus, Austria. Snow conditions are listed as “powdery,” with depths of 170 cm at the summit and 30 cm at the base. All 68 ski lifts and all 198 slopes in the wider Serfaus-Fiss-Ladis area are open.

Wedged on a plateau 4,680 feet (1,427 m) above the Inn valley in between the peaks of the Furgler, Schönjoch and Pfroslkopf mountains, the tiny Tyrolean village of Serfaus, with just over 1,000 permanent residents, is a postcard-perfect example of alpine charm.

Just last month, Serfaus-Fiss-Ladis was elected the world’s second-best ski area (1). But there’s another reason to visit Serfaus. A few feet underneath the cow sheds on its traffic-free Main Street runs the world’s shortest (and highest) metro system, the Dorfbahn.

Indeed, at the bottom of the village, among the pristine peaks and meadows, an incongruous logo sticks out: a white U in a blue square, marking the entrance to an U-Bahn (underground metro). That sight is otherwise only encountered in Berlin, Vienna and other large German-speaking cities. 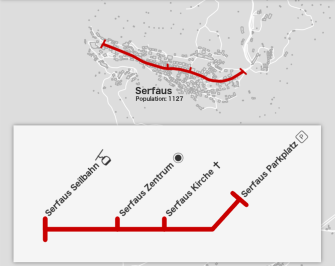 This is Parkplatz (‘Parking Lot’) the first of four stops on the Dorfbahn (“Village Metro”). Just a third of a mile (500 metres) down the road is station Kirche (‘Church’), and then one more stop at Zentrum (“Town Centre”) gets you to Seilbahn (“Cable Car”), the end of the line. From here, skiers have access to the more than 125 miles (200 km) of ski slopes in the area accessible from Serfaus and the neighbouring villages of Ladis and Fiss.

Total length of the Serfaus Metro: no more than 0.8 miles (1,280 m). The Dorfbahn is served by a three-carriage hovertrain. Following the completion of renovations later this year, travel time along the single-line track will be reduced from 11 to 9 minutes and hourly capacity will increase from 1,600 to 3,000 passengers.

So how exactly did a metro get stuck under such a tiny alpine village?

Serfaus started gaining renown as an alpine resort in the 1930s, but mass tourism only took off from the 1950s. By the 1970s, the town’s main street was so swamped each winter with traffic heading up to the cable cars that the council took radical action. 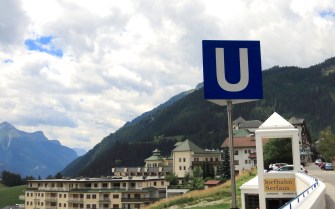 Because Serfaus essentially is a dead-end street, the town council decided to ban cars to a parking lot at the bottom of the village. From there, buses took them to the cable car at the other end of town. Which worked fine for a while. But as Serfaus continued to attract more tourists each year, those buses started clogging up the town too. In 1983, the town council decided on a better solution: taking all that traffic underground, restoring peace, quiet and fresh air to the town above.

The Serfaus metro is served by a single hovertrain, also variously known as an aerotrain, tracked hovercraft or air-cushion vehicle. The cable-drawn vehicle uses lift pads instead of steel wheels in order to eliminate rolling resistance and enable high performance. Since it only needs a paved surface instead of actual track, the system is relatively cheap and easy to install and maintain.

Hovertrains are not in commercial use anywhere, but they do operate at some airports (e.g. Skymetro in Zürich, the Minneapolis–St. Paul Airport Trams, Cincinnati Airport People Mover) and for other internal transport at other institutions (e.g. Getty Center Tram in L.A., the Hospital Tram System in Huntsville, Alabama). 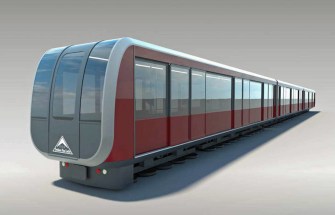 New and improved, but still smallest

In 2017, after 32 years and almost 30 million passengers, a three-stage, $28-million renovation programme was initiated at the Parkplatz and Seilbahn station.

Last year, station Zentrum was substantially enlarged and station Kirche was moved 80 metres to the east. It now has three levels, with access via escalators and elevators. Barriers have been removed, making it easier for all passengers to hop on and off. Newly-designed aerodynamic carriages in silver and red (pictured) will go into service in the spring of this year. The new trains will be remotely controlled, eliminating the need for drivers.

The line will not be extended, however, and no new branch lines are expected any time soon: the Dorfbahn in Serfaus is therefore likely to remain the world’s shortest metro for some time to come.

(1) By the German winter sports portal Skigebiete-Test, from a total of 250 areas. Zerfaus-Fiss-Ladis scored 89 out of 100, the same as Zermatt (#1, Switzerland), Ski Arlberg (#3, Austria) and Whistler Blackcomb (#4, Canada). Ultimate ranking was based on user feedback.

Americans don’t like to ride the bus. There are ways to fix that.
Up Next
Health

Access to trauma care is a race issue. It shouldn’t be.