Remember that map that compares the GDP of individual U.S. states with entire countries? (If you don’t: #864). It provides a stark reminder of the size of the American economy, by many measurements still the biggest in the world. But an equally impressive map can be drawn of China – the world’s second-largest and rapidly growing economy.

Beijing, Shanghai and Hong Kong are the only three names likely to figure on the very short list of Chinese cities that most non-Chinese can name. But, as this map demonstrates, there are quite a few cities more in China with GDPs that measure up to the economies of sizeable independent nations. 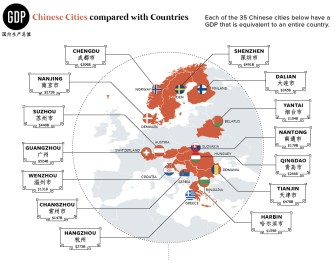 Switzerland has about the economic size of Guangzhou. Chile that of Chongqing. And Angola that of Ningbo. Even if those names have a less than familiar ring today, their economic might predicts that we’ll hear more of them in the future.

The basis for this map was Chinese regional GDP (PPP) for 2015, in billions of U.S. dollars. In all, 35 cities are mentioned (scroll down for full list). While most people have heard of Shanghai, Beijing, Shenzhen and Hong Kong (and some might even be able to pinpoint them on the map), few people will be able to identify cities like Wuxi, Qingdao or Tangshan, despite the fact that they have economies similar to those of Morocco, Hungary and New Zealand, respectively. 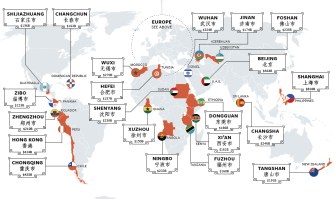 If reading that list leaves you somewhat bewildered, it helps to know that many of those high-performing Chinese cities do not exist in isolation; in fact, a lot of names on the above list can be found of this map, of three megaregions clustering on the coast: 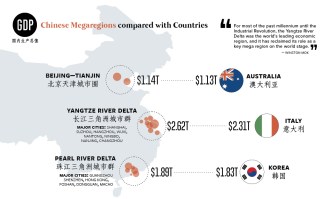 Map found here on V, a media website that creates and curates visual content on investing and business.

Related
Starts With A Bang
Ask Ethan: What are white holes, and do they really exist?
In General Relativity, white holes are just as mathematically plausible as black holes. Black holes are real; what about white holes?
Life
Strange life forms create an “alien” ecosystem in an abandoned uranium mine
Slimy biofilms made up of bacterial and eukaryotic life forms have taken over an abandoned, flooded uranium mine in Germany.
Hard Science
Earth has an eerie “sodium glow,” and astronomers use it to image stars
Air currents in our atmosphere limit the resolving power of giant telescopes, but computers and artificial stars can sharpen the blur.
Health
How saliva changes the flavor of food
“It’s a liquid, but it’s not just a liquid.”
High Culture
Why are flood myths so common in stories from ancient cultures around the world?
Could the prevalence of flood myths around the world tell us something about early human migration or even the way our brains work?
Up Next
Starts With A Bang
What Would Happen If You Became Dark Matter?
The differences between what you are and what you could be are stunning.The human body consists of somewhere around 1028particles, all bound together. The typical human has a mass of […]