In the final round of the French presidential elections on May 7, 2017, Marine Le Pen conceded to Emmanuel Macron, who will now be the president of France for the next five years.

But perhaps these elections were not just about France’s near future. They could also have been a reflection of its deep past. Electoral cartography has a way of bringing to the surface ancient borders that have lain dormant on maps for centuries.

And the first-round results show a curious correspondence between the line that divides Macron and Le Pen Territory and the one that separated the Angevin Empire and the Kingdom of France in the 12th and 13th centuries.

On the right, a map showing where the candidates in the first round garnered more votes than their opponents. Dark brown is Le Pen: she reigns supreme in the north, east and south of the country, with the exception of the Île de France (Paris and environs), the department of the Côte d’Or, and the Savoie region on the Swiss border, plus some adjoining departments.

A long, thin finger of Le Pen-voting departments almost reaches the Atlantic coast, but the southwest and west is otherwise solidly anti-Le Pen, with most of the departments going for Macron (in yellow; red is for left-wing candidate Melenchon, blue for right-winger Fillon, both of whom failed to make it to the second round).

This map bears a striking resemblance to one of the Angevin Empire in the middle of the 12th century: it also commanded France’s western third, from Normandy down to the Pyrennees, with a bulge towards the centre of France halfway down. The resemblance is even more striking when one considers that the Lands claimed by Henry II, the last category in the legend and the stripey bit under Le Puy, was not actually controlled by the Angevins. 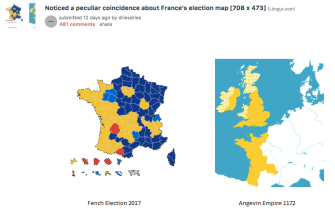 But what was the Angevin Empire? By the looks of it, it was a state that couldn’t decide whether to rule over Britain or lord it over France, and by way of compromise held sway over half of both (1).

The Angevin, or Plantagenet Empire is named after the House of Plantagenet, originally from Anjou in France (hence Angevin), which occupied the English throne from 1154 (accession of Henry II) to 1485 (death of Richard III).

It was established when Henry Plantagenet (a.k.a. Henry Curtmantle), who had acquired Aquitaine by his marriage in 1152 to Eleanor, heiress to the vast Duchy in southwestern France, was crowned king of England two years later.

The combined holdings on either side of the English Channel included England, parts of Ireland and Wales, and half of France. The kings of this hybrid country generally spent more time in France than in England, and often held court at Chinon.

The curious empire of two halves lasted only three kings (2): after Henry II and Richard I Lionheart, John lost control over most of his holdings on the continent to the king of France, Philip II in the early 1200s. (John’s nickname ‘Lackland’ has an other, older origin, though).

Although the borders on both maps match up quite well – to a degree, at least – it is unclear what relevance the comparison has for the elections themselves, or for the positioning of the candidates. Is Le Pen, who dominates the eastern part of France, the representatives of la France profonde – the ‘real’ France, the one eager to stamp out foreign influences? And is Macron, whose territory overlaps with that of a multinational, half-English empire, the standard-bearer of a France with a global, outward outlook?

Perhaps. Correlation need not equal causation. But it is fun to speculate on the links between electoral and historical maps – see also #348. More examples welcome.

(1) ‘Angevin Empire’ is a neologism first proposed by the historian Kate Norgate in 1887. Contemporaries referred to “our kingdom and everything subject to our rule whatever it may be”.

(2) Henry II, Richard I and John are collectively referred to as the ‘Angevin kings’.

These hard-to-finish books are still worth the effort.
Up Next
Neuropsych

A new study finds a connection between brain lesions and the ability of a person to consider other beliefs.