By building islands and stationing soldiers where before there were only reefs and sea turtles, China has literally cemented its territorial claims in the South China Sea. The Middle Kingdom seems confident that its sheer economic size and growing military might will defeat the overlapping claims of other countries. Should Vietnam, the Philippines, Malaysia, Brunei, and Indonesia eventually accept China’s takeover of the area as a fait accompli, that would also be a defeat for the U.S.

Since its much-vaunted “pivot to Asia” a few years back, Washington’s undeclared policy has been to counterbalance Beijing’s growing geopolitical ambitions in the region. However, if Beijing manages to take possession of the Spratlys, Paracels, and other disputed islands, banks, and reefs without a fight, it will have successfully called Washington’s bluff. America’s allies in the region will wonder if the U.S. will do anything to come to their defense. It will make the next item on China’s wish list that much easier to acquire.

That such a wish list exists, can be glanced from the new passports China introduced in 2012. They’re watermarked with a map of China that not only includes Taiwan (as could be expected), but also the disputed maritime areas in the South China Sea, and some territories also claimed (and currently administered) by India. 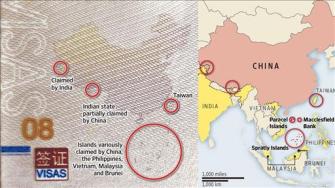 But Chinese irredentism runs much deeper than that. As daunting as it is now, China throughout much of the 19th and 20th centuries was the “Sick Man of Asia,” and outside powers abused the Empire’s weakness to obtain concessions, be they territorial or commercial. Nothing fans the flames of nationalism like the sense of historical wrongs as yet un-righted, so these ‘unequal treaties’ feature prominently in Chinese school curriculums.

This is not a recent development, nor is the present Communist regime the first to exploit these injustices for its own purposes. The map shown is one of several that populated the textbooks of elementary schools in 1930s nationalist China, usually titled “A Map of National Shame” (國恥地圖) or something like it. It shows the territorial expanse of the Chinese Empire in all its former glory. This mega-China runs as far west as the Aral Sea and as far east as Sakhalin Island; it incorporates both Afghanistan and Singapore, and virtually all lands and territories in between.

The pink bit in the middle shows the extent of China’s borders in the republican period. This already was an exercise in wish-fulfillment, as Japan was occupying a large part of coastal China, and much of the interior was ruled by warlords. Nevertheless, “pink” China also comprised the now independent state of Mongolia and (by the look of it) also Tuva, now a part of Russia (and home of the famous throat singers). A wide belt of green and red indicates territories unjustly detached from the Chinese motherland. These include:

+ Northern parts of Pakistan and India 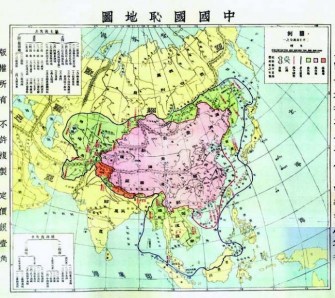 The blue line demarcates the widest extent of the Chinese Empire. It should be pointed out, however, that this is a very generous and somewhat misleading definition of what constituted the Chinese Empire, as it also includes states that merely paid tribute to it without otherwise falling under its sway.

China remains committed to a policy of “peaceful rise”; the list of “official” territorial disputes is fairly short (and includes, of course, the South China Sea and, for example, most of the Indian state of Arunachal Pradesh, which China calls “South Tibet”). But perhaps these old school maps may some day be de-dustified. One Indian geostrategist claims to have insight into the People’s Liberation Army’s timetable for China’s not-so-peaceful rise:

China’s current president Xi Jinping will probably still be in power in 2019, when the Chinese Communist Party celebrates its 100th birthday. Announcing the return of Taiwan to the Motherland would be a nice birthday present.

Overview of China’s passport map taken here from the website of the Uyghur American Association. The Map of Shame found here at Public Culture. The PLA’s geostrategic timetable found here at Depensa.

Related
Neuropsych
Psychology studies that go viral are likelier to be bogus
A new 20-year analysis of over 14,000 psychology studies finds that a study’s media coverage is negatively linked to its replicability.
The Future
How a device transmits radio waves with almost no power
Apart from the energy needed to flip the switch, no other energy is needed to transmit the information.
The Present
Radical idea: Redraw the U.S. map as a nation of city-states
While cities drive national economic growth, their political geography means they cannot effectively deal with inequality, poverty, and other socioeconomic problems.
The Learning Curve
Why do high IQ people stagnate in their careers? Emotional intelligence
Research suggests that emotional intelligence is more vital for success than IQ.
The Present
Even in the age of AI, some problems are just too difficult for computers
Computers are growing more powerful and more capable, but everything has limits
Up Next
Starts With A Bang
Should You Play Powerball? Science Solves The Mystery
Last week’s $1.5 billion jackpot was a record that likely will be broken again and again. But when, if ever, should you play?“I’ve done the calculation and your chances of winning […]