What is the longest straight line on Earth you can walk without getting your feet wet in a lake, sea or ocean? Someone has finally produced an answer to that question – and here’s the map that shows you how to go.

Start in Shitangzhen, a Chinese coastal city just south of Shanghai. March inland, and keep walking over the mountains and across the deserts of China’s Far East. Cross Central Asia into Iran, and narrowly avoid the Caspian Sea. Pass through Iraq, Jordan and Israel (watch out you don’t fall into the Mediterranean). Walk across the Sinai Desert, through the Nile Valley, and then onwards to the Sahara and Sahel. Finally arrive about 6 miles (10 km) north of Greenville, on Liberia’s Atlantic coast (1). 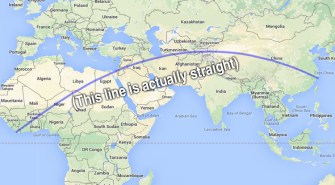 If you’re wondering why that straight line looks bent, the clue is in the word circumference. In spite of the increasingly popular, yet demonstrably false theory that the Earth is flat (3), our planet is in fact almost perfectly round.

Which is why a straight line on the ground appears bendy on a map. Unless you adapt your map projection to protect the straightness of the line, like so:

Either way, it’s a pretty long schlep, and probably not soon to be attempted in real life, as the line transsects some of the world’s trouble spots as well as some of its most inhospitable zones. Maybe in a few years or so, at about the time when the hippie trail (2) reopens.

(1) Or go the other way around, walking from Liberia to China. Same difference.

Related
Starts With A Bang
Ask Ethan: What are white holes, and do they really exist?
In General Relativity, white holes are just as mathematically plausible as black holes. Black holes are real; what about white holes?
Life
Strange life forms create an “alien” ecosystem in an abandoned uranium mine
Slimy biofilms made up of bacterial and eukaryotic life forms have taken over an abandoned, flooded uranium mine in Germany.
Hard Science
Earth has an eerie “sodium glow,” and astronomers use it to image stars
Air currents in our atmosphere limit the resolving power of giant telescopes, but computers and artificial stars can sharpen the blur.
Health
How saliva changes the flavor of food
“It’s a liquid, but it’s not just a liquid.”
High Culture
Why are flood myths so common in stories from ancient cultures around the world?
Could the prevalence of flood myths around the world tell us something about early human migration or even the way our brains work?
Up Next
Surprising Science
We May Now Know Why Whales Keep Stranding Themselves
New research suggests that whale stranding are the result of the navigational mistakes cause by the same magnetic anomalies that produce the aurora borealis.