Women getting paid less for doing the same jobs as men – that is the short definition of the gender pay gap. It’s a phenomenon with longer definitions too, a host of complex causes and a grab bag of shocking statistics, some of which you will find below.

But few things bring the matter into focus as clearly as the map shown here. It colour-codes the gender-based pay gap across Europe, the darker blues indicating a wider gap, the lighter tones pointing to less inequality. And in pink: the European regions where the gender pay gap is reversed, and it’s women who earn more than men.

Produced by Eurostat, the European Union’s statistical institute, it also shows data for non-EU countries, and in many cases provides information at the regional level, revealing stark inequalities in some countries. While the average gender pay gap for the EU as a whole is 16%, it is much higher in some places. 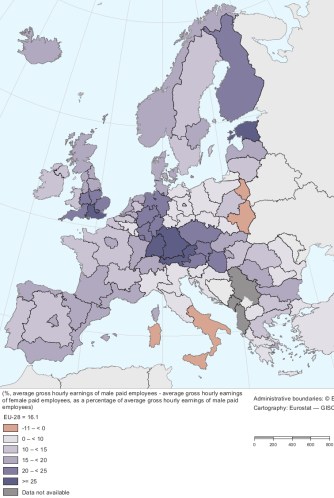 The darkest blue is reserved for countries and regions where men earn at least 25% more than their female counterparts: Estonia, London and South East England, and a transnational area in central Europe consisting of Bavaria and Baden-Württemberg in Germany, and West Austria (1). There is a clear internal gender pay gap in Germany, with the near-equality in the former East contrasting with the aforementioned areas of high inequality, which decreases towards the north.

In the UK as well, the gender pay gap is higher in the south, but this is not a general rule. Finland has higher wage inequality than Denmark, which in turn is more unequal than Croatia.

Remarkably, there are three areas in Europe with a reverse pay gap: here, women earn up to 11% more than men. Indicated in pink, these are: the East Region of Poland, and the South and Islands Regions of Italy. Italy is performing well overall, by the way, with its three other regions all on the lowest but one scale of gender pay inequality (with women earning between up to 10% less).

For a bit more context, here are some stats on the gender pay gap in the European Union, from its website:

In the EU, women on average earn 16% less per hour than men. That means they only earn 84 cents for every euro a man makes. Put another way, they work for free around two months every year.

If you think the gender wage gap is bad, consider the overall earnings gap between genders, which takes into account not just lower hourly wages, but also fewer paid hours and lower employment rates, and the gap grows to 41.1%.

Women do more unpaid work than men. Per week, working men spend 9 hours on unpaid care. Working women, however, spend 26 hours per week on unpaid care. That is almost 4 hours per day. As a result, more than 1 in 3 women in the EU reduce their paid work to part-time, versus only 1 in 10 men.

Women interrupt their careers more often than men, which impacts their pay, pension and promotion chances. Men indeed get promoted more often than women, a trend which culminates at the top: only 3% of CEOs in Europe are women. And women’s pensions in the EU are 39% lower than men’s, on average.

The gender pay gap in the EU decreased from 17.7% in 2006 to 16.3% in 2013, but that is not an improvement per se: due to the economic crisis, men’s wages declined rather than that women’s wages increased.

Of course, the gender pay gap is not just a European thing – nor are its sometimes surprising regional differences. Here is a map of the pay gap between men and women for each U.S. state. They range from a low of $5,850 in Washington DC to a high of $16,453 in Louisiana.

Other states performing reasonably well are Florida, Nevada, Tennessee, North Carolina, Arizona, New York and Georgia: the gap is below $7,500 in all of them. However, unlike in Europe, there are no pink areas, with a reverse gender pay gap. 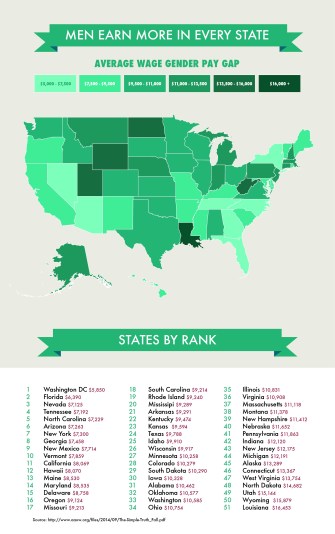 (1) The name of a NUTS region consisting of four Austrian states: Upper Austria, Salzburg, Tyrol, Vorarlberg. NUTS stands for Nomenclature of Territorial Units for Statistics – the acronym derives from the French translation. It is a geocoding standard for the various administrative divisions in Europe, developed for statistical purposes by the EU.

People living in non-industrialized societies don’t get pimples.
Up Next
Starts With A Bang

Cosmic rays shower particles by striking protons and atoms in the atmosphere, but they also emit light due to Cherenkov radiation. Image credit: Simon Swordy (U. Chicago), NASA.The highest energy […]