Using a wide range of statistics, the maps show what each state is best at, and worst at, for both the US and the EU.

It must be said that some of the best-in-class examples sound like backhanded compliments. Really, Cyprus? Best at handling euro coins & notes, that’s your stand-out quality? And Hawaii, Least likely to collide with a deer? Well, duh. There are no native deer on Hawaii (1).

But there’s plenty more to snicker about, or marvel at, on these maps.

What each US state is best at 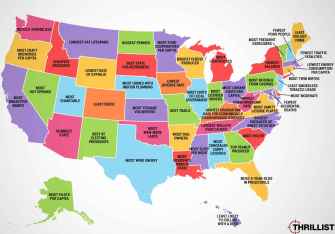 But for quite a few states it seems like it was a struggle to come up with something genuinely nice: Wyoming, lowest rate of syphilis (despite the proximity of North Dakota, biggest penises); Montana, longest cat lifespans; Alabama, most concealed carry licenses; Virginia, most vanity license plates; Tennessee, largest walleye ever caught.

What each US state is worst at

Few things please us more than another person’s flaws and failures – hence reality TV. This less than commendable tendency also explains why this map is much more eye-catching than the one above. 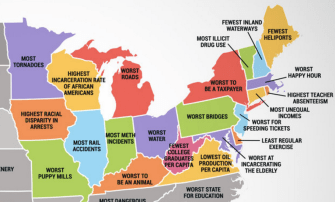 Just as a warm-up, some traffic horror: Illinois, most rail accidents; Pennsylvania, worst bridges; Idaho, worst drivers; Montana, most traffic fatalities per capita (how do those two categories not overlap?); Florida, most recreational boat accidents; Maine, fewest heliports (sounds like a one-percenter problem, though). 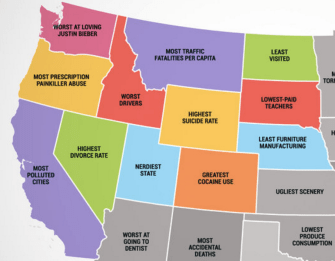 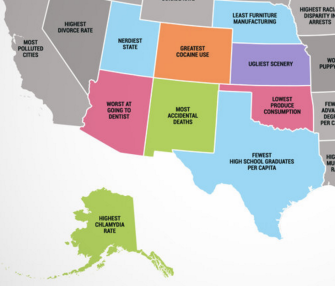 Some labels sound like reverse-backhanded compliments. Utah, nerdiest state? Good for you. North Dakota, least visited? More of your state to yourself! Nebraska, least furniture manufacturing? If that’s the worst thing you can come up with… 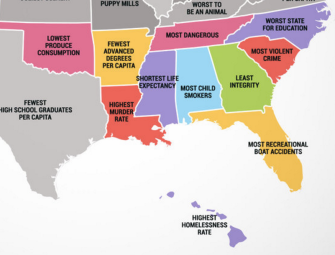 But some labels are genuinely disturbing. Visit Indiana, state with most meth incidents? Only if we have to. How about Missouri, home of the worst puppy mills in the land, or Kentucky, worst state to be an animal overall?  Perhaps not. And definitely not Kansas, state with the ugliest scenery.

What each EU state is best at 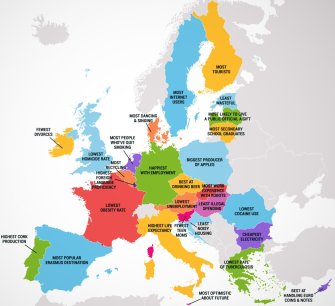 France is the Colorado of Europe: both places have the lowest obesity rate within their respective Unions. And Iowa and Ireland have the lowest divorce rates in the US and EU, respectively. But most European best-ofs don’t have an equivalent on the American map, leaving us to wonder: Which US state is the twin of Portugal, top cork producer in the EU? And where in America do they have the most work experience with robots, as in Slovakia?

Danes regularly top the lists of happiest people in the world; perhaps not unconnected to the fact that they’re the dancingest, singingest people in Europe.

Many Europeans excel at being good to the environment, and their place in it: Belgians recycle most, Estonians waste least, the Dutch quit smoking the most, and the British kill each other the least.

The Germans are Europe’s happiest workers, the Italians live the longest and the Austrians are the least likely to be unemployed. Bulgaria has the cheapest electricity, and Slovenia the fewest teen moms. And Greece, much maligned of late? At least it has the lowest rate of tuberculosis.

What Each EU state is worst at

The rosy picture painted by the statistics above has a Dorian Gray-like twin, bringing out Europe’s ugly side. 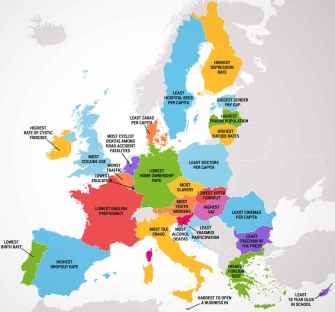 Let’s hope an apple a day keeps the doctor away: Poland produces most of the former, but has fewest of the latter. The Netherlands has the highest share of cyclist deaths among road fatalities. Perhaps it’s all those ex-smokers trying to shape up.

The Czech Republic (or, newly, Czechia) is the best at drinking beer but, disconcertingly, also has more slavery than anywhere else in the EU. If Hungarians have the lowest illegal spend in Europe, perhaps it’s because they have less to spend per se: nobody pays more in VAT.

Lithuania has more secondary school graduates than anywhere else in Europe, but also higher suicide rates. And those Danes? They’re the Mainers of Europe, stuck with the continent’s biggest first-world problem: fewest Zaras per capita.

All maps from Thrillist: here, here, here and here.

(1) Axis deer, native to India, were introduced on Molokai and Oahu in 1868, Lanai in 1920 and Maui in 1959. But their numbers are kept in check through targeted hunting. There were no axis deer on the Big Island until four were illegally introduced in 2009. Their offspring is actively being eradicated under the aegis of the Big Island Invasive Species Committee. This Facebook page monitors axis deer sightings on Big Island.

EV charging stations are the most widespread alternative to gas and diesel pumps. Each alternative has its own hotspots and “deserts.”
Up Next
Starts With A Bang

Ask Ethan: Could an atmosphere slow down a runaway spaceship?

Image credit: Breakthrough Starshot, of the laser sail concept for a “starchip” spaceship.If we’re going to send a probe to another star at 20% the speed of light, what hope […]