Footnote #3 on p. 331 of Curiocity goes as follows: “There is only one Tube station that share no letters with the word ‘mackerel’. It is mentioned on p. 297”. Try to find that nugget of trivia in any other London guidebook.

As humans migrate to cities, the list of megacities that dot the globe grows longer each year. But London is a special kind of metropolis. Not as old as Rome, nor as big as Beijing, it can still claim to be the true capital of the world – it has the right configuration of history, charm and global appeal.

No wonder a place like London generates a metric ton of guidebooks every year – to the frustration of londonists (1) everywhere, because most of these mostly repeat the same old highlights.

Curiocity does not fall into that trap. It leaves the tired tropes to those other guides, and provides London with a trivia-rich compendium that befits the British capital.

Written by Henry Eliot and Matt Lloyd-Rose, Curiocity is the end result of the eight-issue magazine they produced from 2009. In that earlier incarnation, Curiocity was a series of foldable maps, each a richly illustrated guide to the lesser-known aspects of London.

As a cloth-bound, 450-page treasure trove, Curiocity maintains its original balance between the encyclopaedic and the cartographic. 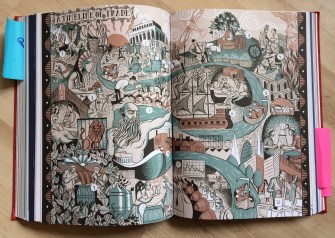 Its twenty-six chapters run from A (Atlas) to Z (Zones), taking in such subjects as Dust, Grid, Vanitas and Ylem (the hypothetical primordial matter of the universe). Each chapter is centred on a map, illustrating that letter’s particular aspect of the kaleidoscopic city – see above for the map on Trade.

The book abounds with illustrations, footnotes, infographics, cross-references. And maps. In line with Curiocity‘s overall attitude, they avoid the obvious and delight in the obscure. Here are some examples of the many that fill the book’s pages. 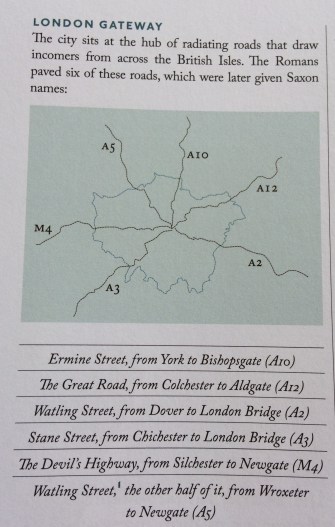 London sits at the convergence of six ancient roads that were paved by the Romans. The descendants of those roads are still in use today.

Ermine Street, leading north from Bishopsgate, is the A 10. The Great Road, from Aldgate to the northeast, today goes by A12. Watling street, from London Bridge to the southeast, survives as the A2. Also leaving from London Bridge, but running to the southwest, is Stane Street – a.k.a. the A3. The ominous Devil’s Highway leads west from Newgate, also the starting (or end) point for Watling Street to the northwest. 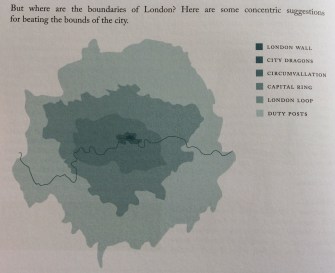 How big is London? The city is surprisingly difficult to pin down. Here are some suggestions for its borders: 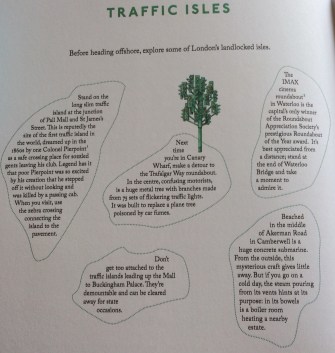 The Thames failed to provide London with an island in the city centre, like the Seine did with the Île de la Cité at the heart of Paris. But London’s river nevertheless contains some 190 islands from source to sea. In its chapter about Isles, Curiocity discusses urban loneliness as a more symbolic form of insularity, gives a potted history of Eel Pie Island and other actual Thames eyots (2), and – on this map – a more prosaic form of isolation: traffic islands. 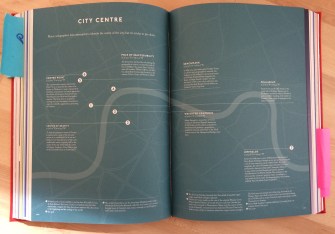 Where is London’s centre? Not surprisingly for a city the confines of which are so debatable, the question has divided the experts. Here are some suggestions:

1. Milliarium: The small traffic island (!) on the south side of Trafalgar Square, next to the bronze equestrian statue of Charles I, is the place from which all mileages to the city are measured.

2. Centre of Gravity: The geometric centre of Greater London is Greet House, part of the Tanswell Estate in Southwark.

3. Weighted Centroid: The population-weighted centroid lies in the Shell Centre next to the Hungerford Bridge train lines.

4. Benchmark: Estate agent Knight Frank identified a pavement bench on Victoria Embankment as the “bullseye of the bullseye” of an area defined by London’s inner ring road.

5. Pole of Inaccessibility: The point furthest from London’s outer borders is Tyler’s Court, off Wardour Street in Soho.

6. Centre Point: An example of ambitious self-definition, the Sixties building at the northeast corner of Soho was christened Centre Point. It now sits in the middle of an area dubbed Midtown by eager estate agents.

7. Omphalos: A raised, cobbled circle now in the north-west corner of Mudchute Park on the Isle of Dogs. In 1593, Dr. John Dee and Christopher Marlowe performed a shamanic ritual here to lay the spiritual foundations of the British Empire.

Curiocityhas been praised as “the greatest book about London published in modern times”. Such hyperbolic praise seems very un-British (though perhaps not very un-London). However, the book does unite the most appealing elements of atlases, encyclopaedias, city guides and general-knowledge handbooks into a psycho-geographic primer of a city at the peak of its global appeal and influence. You can dive in anywhere and learn something new on every page – a joy enhanced with more than a handful of wonderful maps sprinkled throughout the book.

By the way: the only Tube station that shares no letters with ‘mackerel’, is St John’s Wood.

(1) A person with an obsessive interest in London, not necessarily a resident of the city. Also a magazine, with a similar attitude. See also here.

Machine learning and predictive AI are changing the way we operate our devices and machines.