Q: What do sci fi pioneer Jules Verne, horror writer H.P. Lovecraft and the Russian space programme have in common?

A: Their overlapping interest in an inhospitable corner of the South Pacific, only recently identified as the remotest part of the world’s oceans – Point Nemo.

Pinpointing the ’middle of the ocean’ sounds like something explorers and cartographers should have worked out centuries ago. Turns out it couldn’t be done before modern computing and GPS technology. In 1992, Croatian-Canadian survey engineer Hrvoje Lukatela wrote a geospatial programme called Hipparchus, and ’found Nemo’.

He named the place not after the cinematic clownfish – Finding Nemo hit the silver screens only in 2003 – but after the original Nemo, the eponymous submarine captain from Jules Verne’s novel Twenty Thousand Leagues Under the Sea.

Nemo is an appropriate name for what is arguably the remotest place on Earth (2), not only because it is Latin for ‘nobody’, but also because in his later novel The Mysterious Island, Verne revealed the base for Nemo’s Nautilus to be an island in the South Pacific, subsequently destroyed by a volcanic eruption.

Because the Earth is round, the remotest part of the ocean will be in the middle of a circle – i.e. defined by at least three points. Following Mr. Lukatela’s calculations, Point Nemo is located 1,670 miles (1,451 nautical miles, 2,688 km) from these three land masses: 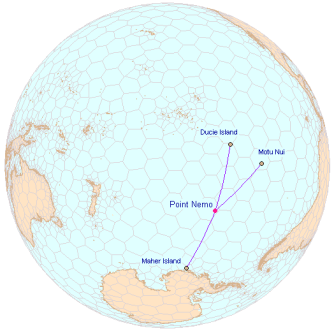 The circle thus created, with Point Nemo at its centre, is an area of ocean 8,650,778 square miles (22,405,411 square km) in size – slightly bigger than the former Soviet Union, the largest country in modern history.

Talking about which – the Russian space programme has had its eye on this part of the South Pacific for some time. Even before its official designation as Point Nemo, it was obvious that this remote part of the world was the ideal place to dispose of space junk. Hundreds of decommissioned space vessels – many Soviet/Russian, but also European and Japanese – have been steered to their watery grave in this, the remotest part of the world, also nicknamed Spacecraft Cemetery. 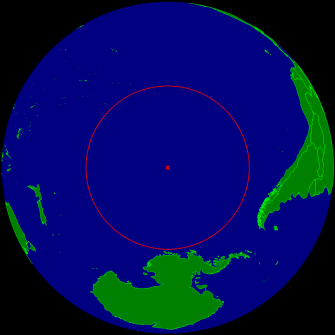 These controlled descents are effected here for a reason: upon re-entry, the craft come into violent contact with the atmosphere, causing them to break apart and burn up, spreading fiery debris over an unpredictably large area. Even though this area is far from land and from regular shipping lanes and aviation corridors, protocol requires that the relevant space agency notifies the traffic authorities in Chile and New Zealand well before they send down another craft, so pilots and sailors can be duly warned to avoid the area.

Russia’s Mir space station is perhaps the best remembered of the almost 300 spacecraft disposed of over Point Nemo since 1971. One of the best-documented re-entries over Point Nemo was that of ESA’s aptly-named Automated Transfer Vehicle Jules Verne, after a supply run to the International Space Station in 2008.

Decades before Point Nemo was named, and before satellites started raining down, H.P. Lovecraft used these lonely waters as the setting for R’lyeh, a “nightmare corpse city (…) built in measureless eons beyond history by the vast, loathsome shapes that seeped down from the dark stars”.

In The Call of Cthulhu (1928), R’lyeh is described as “a coast-line of mingled mud, ooze, and weedy Cyclopean masonry which can be nothing less than the tangible substance of earth’s supreme terror … loathsomely redolent of spheres and dimensions apart from ours”.

The sunken city is the prison of the giant monster Cthulhu, part octopus, part human, part dragon: “There lay great Cthulhu and his hordes, hidden in green slimy vaults”. His followers pray for his regeneration, repeating the phrase: Ph’nglui mglw’nafh Cthulhu R’lyeh wgah’nagl fhtagn (“In his house at R’lyeh, dead Cthulhu waits dreaming”).

Remarkably, Lovecraft placed his lost city at 47°9′S 126°43′W, just 205 miles (330 km) away from Point Nemo. August Derleth, co-creator of the Cthulhu Mythos, placed Rlyeh at 49°51′S 128°34′W, also in the general neighbourhood. Clearly, both were looking for the furthest place from land, but without the benefit of modern satellites and computing. 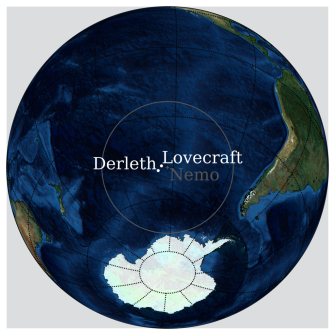 Point Nemo is so remote that it is doubtful whether anyone has ever consciously visited it yet. The participants in the 2015 Volvo Ocean Race, on the leg from Auckland, New Zealand to Itajai, Brazil, came closer than most. As they passed by Point Nemo, it was noted that the ships were closer to the occupants of the ISS, circling overhead at an altitude of around 250 miles (app. 400 km) on one of its 15 daily orbits around the globe, than to the rest of humanity.

Thinking like that could give you nightmares, especially considering that Point Nemo is not just remote and inhospitable, but also eerie to the extreme. And not just in lovecraftian fiction.

In 1997, oceanographers picked up an ultra-low-frequency sound emanating from the depths below Point Nemo. Named the Bloop, the enigmatic sound was too powerful to be produced even by blue whales, the largest known marine creatures. Scientists have since suggested that it was made by icebergs calving in Antarctica. It has not been excluded, however, that the Bloop emanates from a giant, as yet unknown underwater animal. Perhaps Cthulhu is finally stirring because of those occult incantations. Or could he have been awakened by that steady stream of space fragments raining down on his monstrous head?

Ask Ethan: Can stars escape from the galaxy, with planets intact?

A high-velocity star leaving a galaxy and headed into intergalactic space. Image credit: NASA.Is stellar ejection a real thing, and if so, can planets come along for the ride?“Mapping out the elements […]