This Monday, winter floods in Paris finally peaked, with the Seine river reaching a level of 5.84 metres – 4 metres more than normal. Those measurements come from the official hydrometric scale on the Austerlitz bridge. Most Parisians prefer another yardstick for the water level: the zouave of the Alma bridge.

December and January have been the second-rainiest two-month period since 1900, when records began in France. As a result, homes, shops and roads in Paris close to the river have been inundated. Service on a train line under the river has been halted. River traffic is suspended. The Louvre, the Musée d’Orsay and the Orangerie are all ready to move works to higher locations if the Seine rises any further. Rats, flushed out of their subterranean dens, are invading the city at ground level, also looking for dry shelter.

The Seine often rises in winter. But Parisians know to start worrying about the Seine only when the zouave gets his feet wet. Over the past week, they anxiously watched the water creep up along the statue’s puffy trousers and bended knees. However, as the river crested on Monday, the stone soldier managed to keep his waist dry.

So, not quite as bad as the Great Flood of 1910. Back then, the zouave disappeared almost up to his neck in water. Ever since that ‘Flood of the Century’, the 5.2 metre high statue has been Paris’s favourite way to gauge the threat posed by the frequently overflowing Seine. 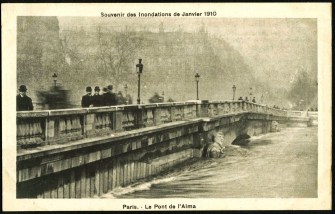 The zouave is the last of four statues that flanked the Pont de l’Alma, which crosses the Seine in the centre of Paris. The original bridge was inaugurated in 1856 by French emperor Napoleon III.

The Battle of Alma was the first major engagement of the Crimean War (1853-1856), in which Franco-British forces resoundingly defeated the Russians. Celebrating the victory, ‘Alma’ became a popular girl’s name in Britain – and the name of a bridge in Paris.

In recognition of the four French army corps which fought at Alma, statues of a ranger and artilleryman were put up in front of the pillars on the downstream side of the bridge, and a grenadier and a zouave on the upstream side.

Zouaves were a class of French light infantry, in service from 1830 to 1962. They were named after the Zwāwa group of Berber tribes in North Africa who had earned a martial reputation, fighting for local rulers during the Ottoman period.

Their exotism enhanced their popularity. Other countries also created zouave regiments, including the Papal States, Poland, Spain, Brazil and the U.S., where zouave units fought on both sides of the Civil War.

The zouave of the Alma bridge is dressed in typical uniform, including fez and baggy trousers. He leans on his rifle, looking towards his right.

During the Great Flood of 1910, which turned Paris into Venice and its boulevards into canals, the eight-tonne statue’s detailed outfit – trousers, belt and jacket, to name a few – became a popular way to measure the rise of the river. In 1910, with river levels at their peak and the zouave nearly getting his shoulders wet, the hydrometric scale hit 8.26 metres.

In the early 1970s, the narrow stone bridge was replaced with a wider steel one. Three statues were removed, remaining on display in other parts of the country. Because of his place in Parisian folklore, the zouave was permitted to stay – but moved to the other side of the bridge. He was re-installed at a different height: either 10 cm higher or lower (nobody seems to know which it is).

Keeping in mind the changes in his position and elevation, this map shows how the zouave holds up as a measurement for river flooding. 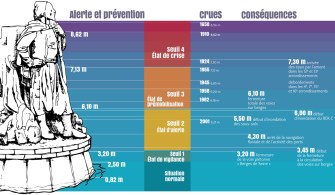 There are five levels of flood readiness in Paris: situation normal, level 1 (vigilance), level 2 (state of alert), level 3 (pre-mobilisation) and level 4 (crisis). Each corresponds more or less to an elevation of the Seine river, as indicated by the map. Some specific steps to be taken include:

The map also shows the height achieved by the Seine in some of the flood years mentioned earlier:

One even higher flood predates the statue of the zouave by almost two centuries: the flood of 1658, which reached a height of 8.96 metres. 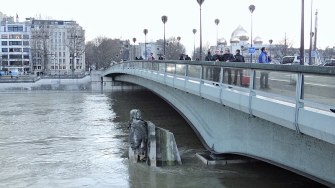 The zouave is now firmly entrenched in Parisian folklore. He’s been mentioned in song by Georges Brassens and other French chansonniers, and he’s lent his name to a novel (Le Zouave du pont de l’Alma by Roger Bordier, 2001). Inevitably, he now also has his own twitter account. Next time you’re in Paris, check whether he’s keeping his feet dry.

Related
13.8
What kind of intelligence is artificial intelligence?
The initial goal of AI was to create machines that think like humans. But that is not what happened at all.
The Present
What’s effective altruism? A philosopher explains
Some effective altruists “earn to give” — they make as much money as they can and then donate most of it to charities.
Sponsored
How to avoid family fights about money
No family is immune to money conflicts, no matter how much they love each other. Here’s what to look out for.
L&D strategy
Best practices for a needs analysis [Templates included]
Conducting a thorough needs analysis requires care, curiosity, and open-mindedness.
Neuropsych
Memory and the benefits of forgetting
Forgetfulness isn’t always a “glitch” in our memories; it can be a tool to help us make sense of the present and plan for the future.
Up Next
The Present
All living organisms on Earth owe a debt to these protein-based ‘Legos of life’
As an added bonus, these tiny building blocks could even be used to split water, creating a clean-burning and near infinite source of energy.