A joyous, tearful reunion of identical twins separated at birth — few stories are more heartwarming, or more emotionally satisfying. And they don’t just happen on TV.

Some time ago, Eric Fidler met up with a friend in one of the bars in his hometown of Washington, DC. The friend was wearing a shirt that read Heaps Good, superimposed on a familiar-looking outline.

“Since we live in DC, I assumed his shirt was a silhouette of the District of Columbia rotated 45 degrees clockwise and that ‘Heaps Good’ was a local band,” says Fidler. 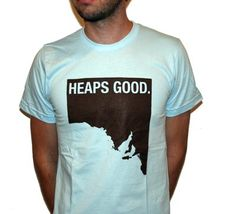 That would not be out of the ordinary. Washingtonians are proud of their city, and not shy to show it: “A good number of people here have DC flag tattoos or even DC flag transoms over their front doors. My local café gives out DC-shaped stickers that say ‘Made in DC.’ This washingtoniana is more common than you would think — and nobody in the suburbs does this with their jurisdictions.”

No Virginia or Maryland tattoos, then. Or transoms. Or shirts. But the map Fidler’s friend was wearing proved to be a “false friend.” “After talking to him for about 20 minutes, I realized the coastline didn’t match up to the shoreline of the Potomac. Because I had been planning a trip to Australia, I finally recognized the shape as the state of South Australia. My friend visited the place three years ago, and bought the shirt there. ‘Heaps Good’ is not some local hipster band; it’s a South Australian phrase that means ‘Really great.'”

Fidler didn’t leave it at that. Back home, he photoshopped both jurisdictions next to each other, correcting for differences in size and orientation. And the resemblance is striking. The two entities really do look similar enough to have been separated at birth. Both are one and a quarter side short of a full square. Their non-rectangular side connects a sharp edge with an obtuse one, connected via a more than vaguely similar shoreline. 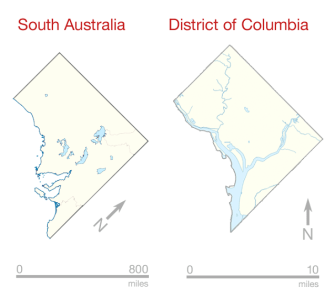 Also, the District’s unofficial motto doesn’t quite exude the same carefree attitude as South Australia’s “Heaps Good.” Perhaps an idea for Mr. Fidler’s upcoming trip to Australia: Walk around with DC outlined on his shirt, under the slogan Taxation without representation. How many Ozzies will get the hint, and recognise that shape as the faraway District of Columbia instead of their own state of South Australia?

Related
Hard Science
Some earthquakes last for seconds, others for minutes — and a few for decades
What do you call it when the Earth shakes for three decades?
Sponsored
What childhood “money story” is shaping your financial behaviors?
Here are the signs that you inherited “money anxiety” from your parents.
The Present
The “maritime Indiana Jones” who salvages shipwrecks now wants to tow icebergs
Simple physics makes hauling vast ice chunks thousands of miles fiendishly difficult — but not impossible.
Neuropsych
Inside the brains of aging dogs
In a citizen science project, thousands of pet dogs are helping scientists to understand what happens to memory and cognition in old age.
Neuropsych
The most common source of awe might surprise you
It’s us.
Up Next
Culture & Religion
The Decline of Western Influence — and Values
The rise of China. The power of Russia. The spread of ISIS. Are Western values (i.e. democracy, human rights, and popular sovereignty) losing their influence in the world?